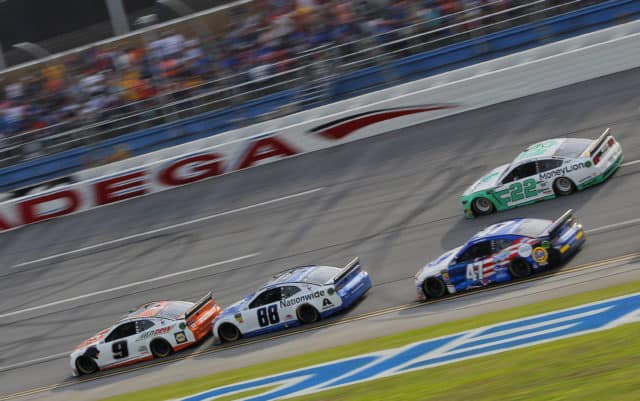 Joey Logano and his team have “clicked” at Talladega Superspeedway, winning three races at the 2.66-mile oval since 2015. On Sunday, it looked like Logano’s No. 22 team might continue their winning trend at the superspeedway.

Logano kept his car up front, but without the help of a teammate, he was left on an island of his own. The driver of the No. 22 lost the lead when he went to block a run by Kurt Busch with just two laps remaining. Hendrick Motorsports teammates Chase Elliott and Alex Bowman took advantage, moving Elliott to the lead and leaving Logano with no help.

“At the end, the 1 (Busch) had a big run and I felt like I had to block that,” said Logano. “When I blocked that I can’t block both and the 9 got underneath me. If I chose the bottom and block the 9, I had the 88 there and they were going to go by me as soon as they formed a run. I was not in a very good spot.

“Once I got on the outside, I thought that would be a better spot to be than the bottom, but the teammates there didn’t race each other to the end, which is good on their part because it made sure one of their cars won,” Logano continued. “If they had gotten side by side I think I could have made something happen but they were selfless toward each other.”

A red flag was flown with six laps to go due to a multi-car incident. Logano was leading at the time and it seemed as though something big was brewing. However, without a teammate nearby, Logano stated he thought the same exact thing would have happened had the race continued green without the red flag, especially as the leader.

Joey Logano says there were teammates out front in Elliott and Bowman who were "selfless with one another" and that he needed them to race side by side to have a shot that never came. pic.twitter.com/FkrBQbWPJo

“I really think even if it was green all the way to the end it would have looked exactly the same,” added Logano. “There were no runs built and no momentum going. It is a tough spot to be in. You think you are in a good spot, and anytime you can take the front row on a final restart you will take it, especially here at Talladega, but it is tough when the numbers are stacked against you a little bit. The team did a good job, though, and our Mustang was really fast and that is what we have to be proud of.”

With one victory under his belt, Logano is virtually guaranteed a spot in the postseason and continues to keep his No. 22 in the picture to earn more points and threaten to win without very much to lose.

Sunday’s race was just another episode of how strong Roush Yates Engines and Team Penske have been at Talladega. Despite the fact that Elliott took the victory, Team Penske drivers Ryan Blaney, Brad Keselowski, and Logano all put their names in the hat today. It would be wise for their competitors to keep this in mind when the series returns to superspeedway racing at Daytona in July.

Methinks it was the caution that did him in, which set up the stampede. He seemed untouchable to that point. It is what it is…SUPERSPEEDWAY RACIN’. A crapshoot. I wish an “unknown” got the checkers if not Logano, would rather hear that hype than CLYDE hype.

Early on Joey was whining about the 41 not helping him. Just shook my head because I never see him helping anyone