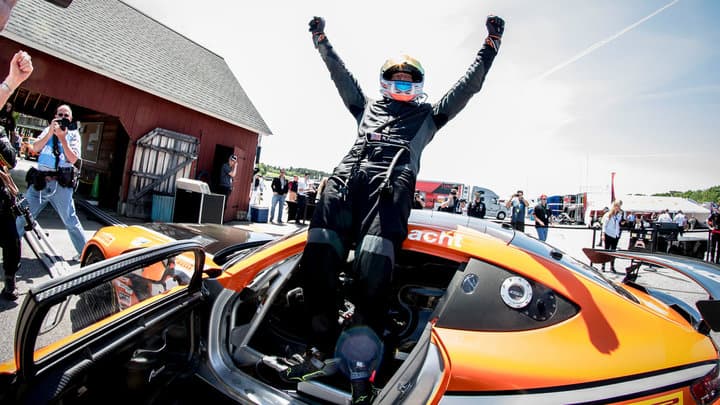 The Racers Group’s Spencer Pumpelly started from the overall pole after setting a track record in qualifying.  From the pole, Pumpelly was able to open up a decent advantage on the pack.  Team Panoz Racing’s Ian James was giving chase in his Avezzano GT4, while Fassnacht was in third, leading the Am class.

On Lap 10, James cut his left rear tire and dropped off the pace.  He was able to limp his Panoz back to the pits for a tire change, but was completely out of the hunt.  He would eventually finish three laps down in 20th.

Just one lap later, Pumpelly suffered the exact same fate.  A flat left rear tire.  Pumpelly had an even longer run back to the pits after the puncture than James did, but didn’t have any more issues for the rest of the race.  Despite that, Pumpelly ended up finishing more than a lap and a half behind in 19th.

Later on in the race, Park Place Motorsports’ Alan Brynjolfsson also cut a left rear tire.  Why did these punctures occur?  The discussion seemed to center on drivers dropping wheels off the track on exit from certain curves.  VIR is an old-school circuit dating back to 1957 that has grass right up against the track in all turns and at corner exits.  A couple of turns on the course had what amounted to potholes just off the course from where drivers had dropped wheels.

When Pumpelly had his puncture, he inherited a seven-second lead over Blackdog Speed Shop’s Michael Cooper.  Over the remaining 15 laps, Cooper cut into Fassnacht’s lead, but could not keep the Am-class racer out of Victory Lane.

In the Am class, Fassnacht’s margin of victory was 3.876 seconds over Andretti.  Drew Staveley was third in his Ford Mustang, while Marko Radisic was fourth in his BMW.  Jeff Burton was fifth in the Rearden Racing Audi.

In addition to winning Race No. 1 on Saturday, Fassnacht turned in the fastest lap of the race, which gave him the pole for Race No. 2 on Sunday (April 28).  That advantage was short-lived as Andretti was able to get the drop on Fassnacht and take the lead.

Andretti proceeded to have his best-ever sports car race, leading and holding off the charges of Robinson, Fassnacht and Pumpelly.  Then, the tire issues started again.  First, Pumpelly cut another left rear tire on Lap 9.  This time, the cut tire ripped a sensor for the Porsche Cayman GT4 MR’s anti-lock braking system off the car.  Once Pumpelly got the car back to the pits, The Racers Group decided that it simply wasn’t it to go back with the car compromised.  Since Pumpelly failed to complete 75 percent of the race, he was not classified as a finisher and did not score any points.

After the halfway point, Fassnacht started to run down Andretti for both the Am class and overall lead.  Despite his inexperience in GT4 equipment (less than 10 races), Andretti was holding his own until the tire issues struck Andrett’s McLaren.  On Lap 19, Andretti was racing for the lead when he got a left rear tire puncture.  Rather than drive three miles on a flat tire (remember, unlike in NASCAR, there are no interliners in Pirelli tires), Andretti chose to pull off and save his race car.  Andretti was classified in 20th, but everyone knew he was there on Sunday.

Andretti’s tire failure gave Fassnacht the lead with a sizable advantage over James and not much time remaining.  Ultimately, that didn’t even matter.  Three laps after Andretti’s puncture, Frank Gannett spun off  at the far end of the  course and was unable to restart.  That brought out a full course caution that ultimately ended the race, giving Fassnacht the weekend sweep.

In the laps leading up to the caution, Robinson was able to run down and get past James for second overall.  That was good enough for the Pro-class victory.  James was third, followed by Cooper and Lewis.

In the Am-class, Staveley was second behind Fassnacht, then Radisic and Stephen Cameron Racing’s Sean Quinlan in the No. 19 BMW.  Burton was fifth.