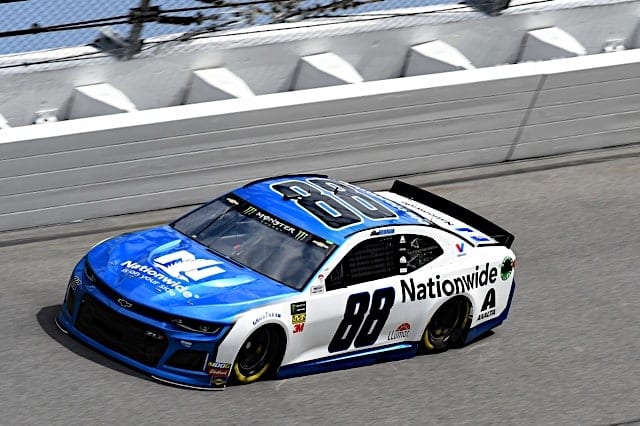 It may have been a brand new Monster Energy NASCAR Cup Series package at Talladega Superspeedway Sunday (April 28). The cars may have run without restrictor plates for the first time in 30 years, posting 38 lead changes and a thrilling style of competition paired with high-speed closing rates. But the biggest takeaway from the GEICO 500 may have been manufacturers working together like never before.

Chevrolet, after a season of stumbles, punched back hard at Ford’s tendency to rout them at superspeedways. They didn’t forget last fall, where a four-car freight train led by Stewart-Haas Racing left their Camaros in a whole other stratosphere. The Bowtie brigade led just eight laps that day and left without a top-five finish while Aric Almirola celebrated in Victory Lane.

What was learned that fateful day was strength in numbers. And with 18 cars in the field on Sunday, Chevrolet could solve that math problem better than any other manufacturer. So they held a pre-race meeting, pledged to copycat Ford and stuck back – hard. Hendrick Motorsports led the way, eventual winner Chase Elliott stuck like glue to Alex Bowman throughout the afternoon.

But HMS weren’t the only ones playing nice. Chip Ganassi Racing came along with drivers Kyle Larson and Kurt Busch. Ty Dillon and Germain Racing made friends early and won their second stage of the year. JTG-Daugherty Racing had both Ryan Preece and Chris Buescher making magic up front; Preece survived late-race carnage and surged to third at the finish. (Buescher, along with Larson, wound up in the middle of mini Big Ones.)

In all, Chevy led 74 laps, including a race-high 45 by Elliott. And when it mattered down the stretch, their persistence on sticking together left Team Penske’s fast trio hung out to dry. It was Joey Logano, Brad Keselowski and Ryan Blaney arguing with each other about sticking together while the Elliott-Bowman duo stood apart.

Can this race serve as a turning point for Chevy and HMS? Elliott, after all, won last time out at the next track on the circuit: Dover International Speedway. It’s also a place where Jimmie Johnson has won more times than you can count on both hands.

It took 10 races for them to get their act together. But there’s still another 26 for the Bowtie Brigade to redeem themselves. Stay tuned. – Tom Bowles

Since moving to Richard Childress Racing at the beginning of the 2019 season, Tyler Reddick has been oh so close to winning. On Saturday, he returned to Victory Lane at Talladega.

Reddick began the race from second, though making short work of getting to the lead. He and Ross Chastain combined to lead all 25 laps in the opening stage, with the No. 2 capturing the stage win.

The second stage was eventful for Reddick. Midway through, he was in the midst of the lead pack and bounced off the outside wall, causing damage to the right side. At one point, the No. 2 was within 300-400 yards of going a lap down, but a timely caution saved Reddick. He made his way through the pack quickly, capturing the lead, making big, bold blocks to hold off the field, in what was a thrilling final lap.

By winning, Reddick has matched the same amount of top fives (seven) he had all of 2018, a year in which he won the Xfinity championship. But we’re only nine races in to 2019.

Josh Williams had a career day in eighth, as did Chris Cockrum in 10th. Matt Mills also had a career-best finish in 17th.

The series heads to Dover International Speedway this weekend. Justin Allgaier enters the race as the defending winner. – Dustin Albino

Gander Outdoors Truck Series: Back on Track at Dover

After a five-week break, the Gander Outdoors Truck Series heads back on track this weekend at Dover International Speedway.

The last time the series was on track, Kyle Busch dominated, leading 97 of 147 laps at Texas Motor Speedway to score his fourth win in five races this season. Stewart Friesen ended up second, followed by the ThorSport Racing trio of Johnny Sauter, Grant Enfinger and Matt Crafton.

The JEGS 200 will run Friday, May 3 at 5 p.m. ET on FOX Sports 1. Johnny Sauter, who just rejoined ThorSport Racing this season, has won the last two events at the track. – Beth Lunkenheimer

ARCA: Todd Gilliland Builds Himself Some Confidence at Talladega

Todd Gilliland may only be 18, but 2019 has already been designated as a must-win season.  Even though Gilliland is currently eighth in Gander Outdoors Truck Series points, Kyle Busch has already stated that Gilliland’s career is on the line.  He’s dissatisfied with the performances that Gilliland has posted with Kyle Busch Motorsports.  He’s in need of some good news.

Enter DGR-CROSLEY.  Todd Gilliland dropped back down to ARCA Friday (April 26) in order to compete in the General Tire 200.  Todd was able to win the race off of pit road on Lap 43 and take the lead.  From there, Gilliland tethered himself to the double-yellow line and did not move from there for the remainder of the event.  No one could do anything with Gilliland, who held off the pack to take his second career ARCA victory.  With the trucks returning to action Friday at Dover International Speedway, Gilliland will enter the race with a bit of momentum.

Despite the victory, likely the biggest takeaway from Friday’s ARCA race was the low number of teams in it.  Only 26 teams entered the race, which is the lowest number ever.  The previous low for ARCA entries at Talladega was 31 last year. – Phil Allaway

This past weekend, the TC America classes took on the 3.261-mile full course at VIRginia International Raceway for four separate races.  The result was a couple of weekend sweeps.

In the TCR class, McCann Racing recently acquired an Audi RS3 LMS Club Sport with a sequential transmission (as opposed to the DSGs in the team’s TCR Cup entries).  2018 IMSA Continental Tire SportsCar Challenge TCR champion Britt Casey Jr. was tapped to drive.  For much of the weekend, no one could hang with him.

Casey was the man to beat in Race No. 1, but slowed late with power issues, allowing Michael McCann Jr. to win overall.  His third-place finish was nullified by the car coming up underweight.  In Race No. 2 Sunday, Casey charged from seventh to take  lead from Michael Hurczyn with 20 minutes remaining, then held on for the win.

Valtteri Bottas is supposed to play the wingman to Lewis Hamilton, like Maverick to Iceman.  While it is unlikely that Bottas will supplant Hamilton in the Mercedes pecking order, it doesnʻt mean that Bottas wonʻt steal a moment of the spotlight from time to time.  This season, Bottas has been doing his best to shine.

With one win already in 2019, Bottas has been holding his own against his five-time champion teammate but with the win at the Azerbaijan Grand Prix heʻs actually atop the standings after the fourth race of the season.  Throw in the fact that he started on pole at the last race in China and Bottas is enjoying a stellar start.

The fact that Mercedes have finished 1-2 in each race this year makes things a bit difficult to comprehend as they are clearly running sterling.  The performances come as Ferrari has been considered to be faster and should be outpacing the Silver Arrows.

As B0ttas excels, another driver who had been riding as Robin to Batman has found it difficult to find much to feel happy about.  Daniel Ricciardo drove as teammate to Sebastian Vettel and now the upstart Max Verstappen but had not stood as the clear number one at Red Bull.  Now with Renault, heʻs supposed to be happy as the favored driver.

Nothing, however, has gone right with Ricciardoʻs move from Red Bull to Renault and that was highlighted with exaggeration when he, after running off the track limits with Daniil Kvyat backed into the Russian driver and effectively ending their days.

The move, which looked like Keystone Cops comedy, was as surprising as it was stupid.  At its core, it looked like a brain fart and one that Ricciardo will probably acknowledge with embarrassment.  With three DNFs to start the season, it would be easy to say that the Australian driver is struggling.  Ava Ladner