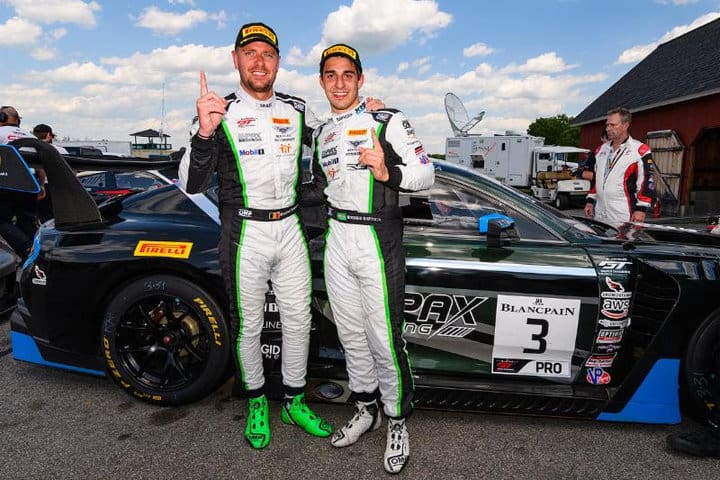 Sunday afternoon (April 28) saw K-PAX Racing’s Rodrigo Baptista and Maxime Soulet continue the team’s excellent start in 2019.  The duo, driving a repaired Bentley Continental GT3 after Baptista’s crash on Saturday, led the second half of Sunday’s race to claim the victory in Race No. 2 at VIRginia International Raceway.

“We had a much better day than yesterday, that’s for sure,” Soulet said after the race. “I had an all right start, and I managed to find a pace. Then, we had a really good pit stop, and Rodrigo finished strong.

“I knew I just needed to keep up with the Ferrari, and that’s what I did. I was not going to take any risks. I just wanted to manage the pace, and then I saw the Porsche was backing off quite a bit, because he was losing pieces of tires. I knew Rodrigo and I are really quick with pit stops, and the boys did a great job.”
Teammate Andy Soucek in the No. 9 Bentley started on pole, but immediately came under pressure from Wright Motorsports’ Scott Hargrove. Hargrove, himself trying to overcome a crash on Saturday, was able to get past Soucek on the first lap and take the lead.  The current IMSA regular with PFAFF Motorsports ran extremely hard to keep Soucek at bay, and paid for that.
After the race, Hargrove posted an Instagram live picture that indicated that he had run the inside shoulder of one of his Pirelli tires down to the cords in just over 45 minutes. As a result, Hargrove’s lead shrunk in the final laps of his run. That lead was not over Soucek, but over Soulet and Dane Cameron in the RealTime Racing Acura.
Soucek’s day fell apart on lap 13 when he cut his left rear tire. That resulted in the No. 9 Bentley flying out the road. Soucek was able to get the car back to the pits for a replacement tire with minimal damage and continued. Unfortunately, an in-car fire later in the race put the No. 9 out for the day.
During the mid-race stops, K-PAX Racing had a great stop to put Baptista out in front while R. Ferri Motorsport and Wright Motorsports struggled. Once out in front, Baptista was able to maintain to bring home another victory, the duo’s second at VIR after winning Race No. 1 last year.
The margin of victory was 10.104 seconds over Wright Motorsports’ Hargrove and Patrick Long in their Porsche. Alegra Motorsports’ Wolf Henzler and Marco Holzer finished third for the second straight day, while R. Ferri Motorsports’ Miguel Molina and Toni Vilander were fourth across the line. However, Molina was judged guilty of causing a collision on the final lap of the race. A five-second penalty was assessed post-race, dropping the No. 61 Ferrari to fifth. The penalty elevated the No. 22 Porsche of Michael de Quesada and Daniel Morad from Alegra Motorsports to fourth.
The Pro-Am class was dominated by RealTime Racing on Sunday. Cameron quickly drove up through the field to move up to second overall. When Hargrove pitted, Cameron took the overall lead and proceeded to hold off on stopping as long as possible.
The stop was not the greatest and cost the team the overall lead, but Bret Curtis was able to hold on to a substantial advantage and bring home the Pro-Am win in sixth overall. RealTime Racing’s margin of victory was 19.054 seconds over DXDT Racing’s Colin Braun and George Kurtz in the Crowdstrike Mercedes. Wright Motorsports’ Matt Campbell and Anthony Imperato were another 10 seconds back in third. In Am, Squadra Corse Garage Italia’s Caesar Bacarella and Martin Fuentes once again claimed victory.
BLANCPAIN GT WORLD CHALLENGE AMERICA VIR RACE NO. 2 RESULTS
Blancpain GT World Challenge America returns to action in three weeks at Canadian Tire Motorsports Park in Ontario for a full weekend of racing on Victoria Day weekend. Coverage of the races will be split between gt-world-challenge-america.com and the CBS Sports Network.