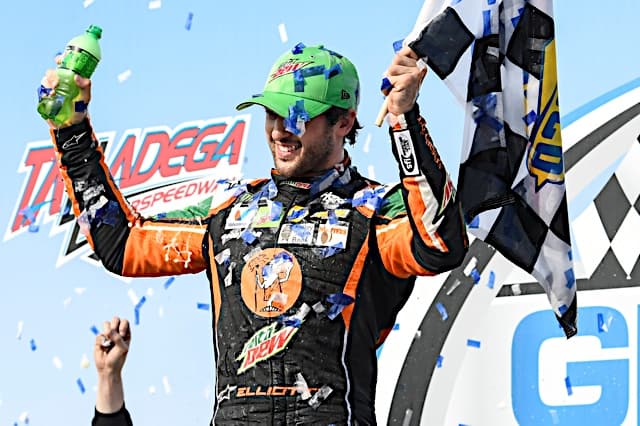 Chase Elliott led the most laps (44) on Sunday, but more importantly, he led the one that counted. It wasn’t necessarily a dominant performance. In fact, 15 different drivers led at some point, and Elliott accumulated his laps led in four separate stints.

What Elliott did exactly right was keep himself in just the right position to lead as the white flag waved. There was a little luck involved, too. Without the final caution, he might well have found himself racing three-wide for the win with Alex Bowman and Ryan Preece, but the stars aligned for the Georgia native to grab his – and Chevrolet’s – first win of 2019.

Superspeedway racing always allows some drivers who don’t necessarily grab headlines on a weekly basis to shine. This time around, Bowman and Preece put themselves in the conversation up front, finishing second and third, respectively. Daniel Hemric scored his first career top five, finishing fourth, and part-timer Brendan Gaughan took a top 10, finishing an impressive eighth for Beard Motorsports in his second start of the year. Different faces among the familiar are good for the sport as a whole and a reminder that circumstances don’t always dictate talent.

The spoilers were massive, and as a result, closing speeds were lightning fast, much more so than last year. Still, the race was not much different than what we’ve seen at Talladega before: relatively quiet until the last 40 or 50 laps, when things heated up.

There were a couple of early incidents, a six-car crash on lap 11 that ended the day for Kevin Harvick and others and a blown tire for Jimmie Johnson that resulted in a single-car incident, but it was tame.

In fact, fans were almost lulled into complacency. The race went so smoothly that it was even plausible that they’d get to the end without another major incident.

It didn’t. A five-car crash and resulting eight-minute red flag ensued. The restart produced about what everyone expected: a couple of single-car incidents and another five-car incident on the backstretch on the final lap just as the caution came out for an earlier spin as debris was shed on the frontstretch. The race ended under yellow as Kyle Larson suffered the wildest ride of the day, flipping several times after tangling with Jeffrey Earnhardt.

It was mostly standard Talladega fare when the smoke cleared. But is that a bad thing? Maybe not. A lot of people like the brand of racing the superspeedways bring to the sport, with the tight quarters and heightened risk. These races are always white-knuckle affairs for many viewers, and while most aren’t watching for the crashes, the risk of crashes keeps them glued to the action.

In some ways, that risk is missing from a lot of races. No, we don’t need multi-car crashes every week or really at all. We don’t need mechanical failure after mechanical failure. But the idea that those things could happen is part of the sport’s appeal. And like the superspeedways or not, they always bring that feeling.

Five-time Talladega winner Brad Keselowski had one of the best cars in the field and looked like he was poised to strike once again until the final round of pit stops when he spun coming to pit road. While he landed backward in his own pit with remarkable precision, the damage was done. Keselowski lost the lead pack and by the time he got the caution he needed, there wasn’t enough time to make up the positions he lost. He finished 13th, but at least his pit road entrance was memorable.

Polesitter Austin Dillon was looking for his second career superspeedway win on Sunday, and his pole run on Saturday put him in a solid position to start the day. But he never led a single lap, giving up the top spot to Keselowski before the first circuit was complete. From there, Dillon was never quite able to regain his footing. He finished 14th, well behind his rookie teammate Hemric. While Austin finished ahead of younger brother Ty Dillon, who won the first stage and led seven laps in a presumably equal car. For Austin, there’s still work to be done. He needs to find consistency before he’ll find much more.

Defending race winner and Cup champ Joey Logano looked unbeatable as the laps ticked down. With 10 to go, he held the lead and made it look easy, blocking all challenges along the way. But when Chis Buescher got turned into traffic and the cleanup brought out the red flag, Logano lost his advantage, and on the restart, a train of Chevrolets kicked the champ back to a fifth-place finish. But with that result, Logano has six top fives so far this year, as many as point leader Kyle Busch. He’s currently second in points.  The driver of the No. 22 Ford is showing that he earned his title, and he’s making himself a favorite for another one.

After dominating Cup competition for many years, Chevrolet has fallen a bit behind the Ford and Toyota camps when it comes to race results over the last couple of years. So this week, the manufacturer reached out to its teams and asked them to work together to make sure there was a Bowtie in Victory Lane at Talladega.

The teams delivered. While the Fords and Toyotas wheeled and dealt among themselves, the Chevy camp was a freight train. And it worked. Elliott derailed Logano’s bid on the strength of Bowman, Preece and Hemric behind him.

Of course, it’s easy to work together when there’s nothing being shared besides track position. For Chevrolet to contend week in and week out, there needs to be cooperation beyond drafting. The Ford camp is formidable because it’s more or less united with a common goal. With just one engine builder, it benefits from the ability to share information without giving up secrets, at least to a degree. The Toyota camp has just one major team and its satellite to worry about.

Chevrolet teams may need to learn to share the sandbox if they want to avoid being left behind.

Handling seemed to be a bigger issue at Talladega than it has in a long time. In addition, NASCAR added a wicker to the spoilers to slow the cars down a bit. The racing was decent for a superspeedway, but the cars did lack some stability. The last time the cars had this much downforce on the speedways, they also sported a roof spoiler which helped stabilize the front end. Is that something NASCAR should consider going forward?

Maybe. That package produced Dale Earnhardt’s last win, at Talladega in the fall of 2000, a race that’s still an example of what a superspeedway race should be. It ran wire-to-wire with no cautions with the only incident of the day coming as the field took the checkers. But it’s also the package that was on the car the day Earnhardt lost his life at Daytona. NASCAR did away with it soon afterward, citing safety.

The thing is, it wasn’t that package that caused Earnhardt’s crash. In general, the stability it brought may have even avoided an incident or two. The Xfinity Series ran a similar setup for years afterward, making the safety claims questionable.

Would a similar roof strip allow cars to catch the leader more easily? Remember, Earnhardt came from 18th in four laps for his last win, driving up the middle lane. Now, it’s harder for one line to make forward progress. Should NASCAR go one step further with the speedway package? Maybe not this year, but it should be on the table.

How… much difference was there between the restrictor plate and tapered spacer?

At first glance, not much. As above, the race was pretty much standard fare. At least, until it wasn’t.

There were a couple of things that were notably different Sunday. One was that a driver could, with a little luck, save an out-of-shape car and not get run over. At one point, Ryan Blaney’s No. 12 nearly got away from him in the high groove.

But it didn’t. Blaney was able to save the loose machine and, while he lost positions, he didn’t spin and didn’t cause a multi-car incident.  Whether that was because of a bit more throttle response or something else, it was a departure from what’s become the norm in a good way.

Also, when there were incidents, they didn’t take out a dozen or more cars, something that’s become more and more commonplace in recent years. Some superspeedway races were more a matter of who was still running than who was the best driver or had the best car.  That’s not a good look. Sunday, there were three multi-car incidents, with the most cars involved in any one of them six. In those three incidents, a total of 16 cars were involved. Compare that with last spring’s event, when 14 cars were involved in a single crash.

The real test will be Daytona in July. It’s a narrower track than Talladega and tends to produce more frequent and larger wrecks, so if the casualties there are down, it will be more telling.

the end of the race was typical mayhem. knew there would be wreck with under 10 to go, could just tell.

i love how all the seat backs in the stands are such that you can’t really tell if there is a body occupying it or not.

kyle larson was pretty shaken up from the wild ride he took.