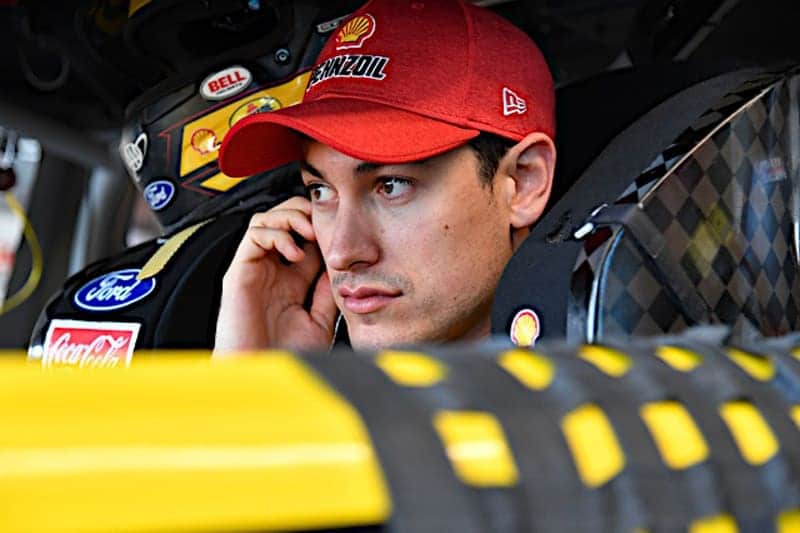 Late last season, nobody made the most of a few good opportunities better than Joey Logano. A victory at Martinsville Speedway carried him to the season finale as a championship contender. Three weeks later, Logano found himself with the best short-run car at Homestead-Miami Speedway. When presented with a short green flag run to the finish of the race, Logano flew past everyone and claimed the Monster Energy Cup Series championship.

Things have been a little different for the No. 22 team in 2019. Race-by-race, Logano looks just as strong as he was at the end of 2018.  He had one of his best runs of the season at Talladega Superspeedway on Sunday, leading 37 laps and finishing fourth. However, Talladega was another race where Logano came very close to winning but did not wind up in victory lane.

It is quickly becoming a pattern in 2019 – Logano runs up front and contends for wins almost everywhere, but those strong performances have only translated to one victory.

The finish to Sunday’s race marked the latest missed opportunity for the No. 22 team. Logano had been working hard to stay in the lead as the race wound down, throwing several blocks and leaning on the support of his Team Penske allies. That support eroded after Brad Keslowski spun on pit road during his last green flag stop and collapsed completely when Logano lost contact with Ryan Blaney while trying to hold the lead.  Still, Logano held the lead until a multi-car accident on the backstretch brought out the yellow flag on lap 182.

When the race restarted, Logano still looked like the best bet to win. Kyle Busch had restarted in second beside Logano, but fell back after Kurt Busch abandoned his brother and dropped to the low groove. Kurt Busch’s No. 1 got a push from Chase Elliott and Alex Bowman going down the backstretch, causing Logano to jump out of line and block Busch in turn three.

However, Elliott and Bowman stayed together instead of following Busch, and Elliott took over the lead. Logano regrouped with Blaney and tried to mount a charge in the upper groove in the final laps, but the race ended abruptly when NASCAR threw a last lap caution for another major crash on the backstretch. Elliott claimed his first victory of the season, as well as the first win of the year for Hendrick Motorsports and Chevrolet.

Sunday’s race was the third in a row which Logano could have won if a few things had gone differently. Two weeks ago, at Richmond Raceway, Logano was rapidly closing on Martin Truex Jr. and Clint Bowyer during the race’s last laps. As Truex and Bowyer fought for the lead, Logano drove right up behind them and added himself to the fight for the win. It looked as if Logano was faster than both Truex and Bowyer, but in a race where passing was difficult, the No. 22 struggled to find a way around the No. 14. Logano eventually did get past Bowyer and put Truex in his crosshairs, but it was too little, too late.

The week before that, at Bristol Motor Speedway, Logano was leading late and appeared to have the race in the bag. But after a caution came out on lap 478, crew chief Todd Gordon called the No. 22 to pit road for four fresh tires. When several other drivers opted to stay out, Logano had to restart deep in the field. He drove all the way to third in the final 14-lap green flag run, but was unable to catch the Busch brothers.

Even earlier in the season, Logano missed out on several opportunities to win races. Much like at Talladega, he had a great run going in the Daytona 500 but got bested by teammates working together in the closing laps. At Atlanta Motor Speedway, Logano was challenging Keselowski and Truex but had to make a late pit stop for a flat tire. And at Auto Club Speedway, Logano was unable to chase down Kyle Busch with the race win on the line.

The only time this year when Logano has been able to turn the tables on his competition was at Las Vegas Motor Speedway. There, he held off Keselowski’s last-gasp charge to collect his first win at Las Vegas. That victory all but locked Logano into the playoffs this year. He remains second in the season-long standings after Talladega, only 15 points behind Kyle Busch. He has also earned more stage points than any other driver this year (116) and is currently riding a three-race top five streak. Plenty of drivers would love to be having a season like Logano’s.

However, no driver can ever fully shake the “what-if” feeling when wins slip out of his or her grasp. Had Logano managed to win any of the three Cup Series races in April he came close to winning, he would have at least five more playoff points. He could have another 15 if he had won all three. Certainly, performance in the playoffs matters most when determining a champion under NASCAR’s current system. But playoff points can make a big difference when things get tight.

Don’t forget about Kyle Larson in 2017, who won several regular-season races and appeared to be a top championship contender.  When Larson encountered trouble in the last race of the round of 12, he wound up nine points below the playoff cut line and got eliminated. Despite all the playoff points he had built up, he did not have enough to protect himself from one bad finish.

With 16 races to go before the playoffs, Logano has plenty of time to earn more wins. He remains a weekly threat to reach victory lane and one of a few championship favorites. But it will be interesting to see how much these missed opportunities and lost wins matter as the season progresses.

Yup, a lot of missed opportunities and what if’s. He should have multiple wins by now, but he doesn’t. One could say he has been the most consistent, except when closing whatever deal is happening at the time. Something I suspect will not be a pattern.

Move on…He could have, he should have, and he didn’t. That includes the TEAM.

Now we are stuck hearing for the next week about CLYDE….The old fart Clyde and the young Clyde and that damn siren. Ugh.

I marvel at CLYDE having all the rich advantages of legacy and pedigree rising in NASCAR, but he is exempt from the “SILVER SPOONED” caca that floats around with people’s hypocrisy.

Joey’s lucky that Truex Jr. didn’t take him out. He had several opportunities and who could blame him. Kind of surprised to hear all the passion for the anointed one, but glad to hear some positive cheers.