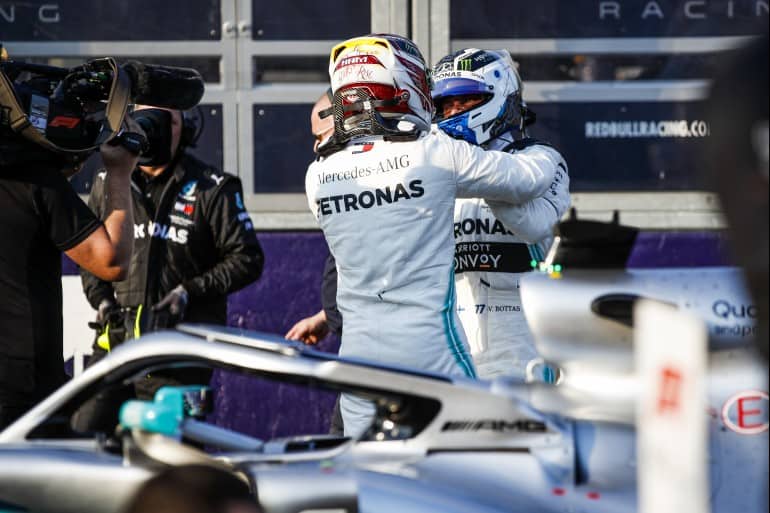 Lewis Hamilton and Valtteri Bottas celebrate the start of the 2019 season with a front row qualifying lock-out (credit: F1 media)

Valtteri Bottas finally gets his victory in the Formula One Socar Azerbaijan Grand Prix at Baku after the win was taken from him last season in a heartbreaking puncturing tire fashion. Bottas claimed his second win of the 2019 season and fifth of his F1 career.

After an eventful weekend leading in, the race itself was rather uneventful as there was no safety car in the race for the first time since the debut Baku race in 2016, just one Virtual Safety car on lap 40.

“It was a tough race even though maybe not that much happening at the front,” said race winner, Bottas. “Lewis [Hamilton] was putting pressure on me all the time – I was happy to see the chequered flag and take this first place”

Hamilton put pressure on Bottas toward the end but had to settle for a second-place finish, securing an incredible fourth consecutive 1-2 finish of the season for Mercedes.

“Congratulations to Valtteri. He drove really well and made no mistakes,” said Hamilton. “This has to be the best start to a season that this team has ever had, and I’m grateful to be part of it.”

“It was crucial to get third, good for Charles to get the fastest lap and snatch it away from the Mercedes boys” said Vettel after getting out of his Ferrari.

Max Verstappen came in fourth. Leclerc could do no better than fifth on a recovery drive following his qualifying crash but did claim that one point for fastest lap.

Sergio Perez has another great race in Baku to finish in sixth. The McLaren duo got double points with Carlos Sainz and Lando Norris finishing seventh and eighth respectively. Lance Stroll gets his first two points on the season in ninth and Kimi Raikkonen continues to carry Alfa Romeo in points with his 10th-place finish.

Pole-sitter Bottas got a good start off of the line, Hamilton battled him hard through the first two corners, but Bottas had the inside line into Turn 3 and took off into the lead.

Leclerc did not get off to a fast start gaining no positions off of the start after Daniel Ricciardo made an aggressive move to the inside to move up past the Ferrari and Lando Norris for ninth. Leclerc was also on the harder tire in order to lengthen his first stint and gain time on the leaders when they changed to the softer tire in his second stint.

Once DRS activated, Leclerc started making his way to the front and was quickly in the top four before we were ten laps into the race.

Despite everyone including Hamilton believed coming into this weekend that Ferrari had a speed advantage, Mercedes jumped out to a three second plus advantage on Vettel in third through the first stint. Leclerc had an advantage over his teammate on the medium tire through the first stint with the track temperature adhere more to the harder tire compound. Vettel’s first pit stop came when he was being put under pressure by Leclerc. After the two Mercedes cars pitted, Leclerc inherited the lead until his stop on lap  35.

It looked as if Ferrari thought that they had found a way to close in on Mercedes on the medium tire when Vettel began to challenge Hamilton for third on track while Leclerc lead without before his stop. However, Hamilton responded through the next few laps to set what was the fastest lap of the race to strengthen the gap between the Mercs and Ferrari.  Mercedes looked to take away the advantage Leclerc would later have on the soft tire by closing the gap on track and making Leclerc need to gain 10 seconds plus on the leaders once the Ferrari pitted on a soft tire that degraded faster than the medium.

By lap 30 the Mercedes teammates had caught up to Leclerc and the Ferrari and it was time for the Monaco native to come in and start to gain time on the soft tires. However, Ferrari for some reason kept Leclerc on track for longer than maybe they should have but there was doubt that the soft tire could make it twenty laps as the leaders tires did not make it that long at the start. The Mercedes team and Vettel got past Leclerc but tht had allowed Verstappen into the battle for third and fourth as Leclerc would be quite a ways behind Verstappen, and fifth to Gasly when the Ferrari pitted on lap 35. Leclerc did get past Gasly on track, but just could not take enough time off of Verstappen in fourth despite being on the newer, softer tire and was resigned to his fifth place finish.

Gasly lost power in his Red Bull after a difficult weekend and beginning of the 2019 season, bringing out the virtual safety car on lap 40. Red Bull came into Baku with a new upgrade that was supposed to increase reliablity, it may have been a gearbox issue and not the engine itself but things just go from bad to worse for the French driver trying to make a good impression on his new Red Bull team.

The Haas Rich Energy team struggled through the race as Romain Grosjean was the first off-track excursion on lap 25 to fall to 18th, yet still faster than the Williams until Grosjean retired on lap 41. Renault also seemed to have a disadvantage after Hulkenberg did not make it to Q2 and couldn’t move into the top 15 in the race. His teammate, Ricciardo was bumped from points paying positions after his aggressive start moved him up to eighth, the Aussie was running 11th until he out-braked himself into turn three on lap 32 while trying to overtake Daniil Kvyat.

The two cars did not make contact until Ricciardo tried to reverse back onto the while Kvyat’s car was still sitting there, no safety car came as a result of the on-track moment but Kvyat and Ricciardo both retired as a result; it was Ricciardo’s third retirement in four races with Renault.

Once the two Mercedes drivers were back in front, Hamilton began to put pressure on Bottas before the VSC on lap 40 allowing the drivers on the track to save their tires but Bottas was able to gain two seconds on Hamilton following the VSC. We had seen this one-two positioning this way through the 2018 Azerbaijan Grand Prix before Bottas had the puncture with a couple of laps to go, nervous eyes watched on to see if there would be a repeat for the heartbreak, but as the laps closed Hamilton gained ever closer and was within a second of Bottas through the final laps, but Hamilton went wide off of the final corner entering the final lap and could not get to Bottas to steal the win

The heartbreak did not arrive and Bottas got his revenge on Baku to win his second race of 2019. The Finnish driver has gotten off to an incredible start to bounce back from a difficult 2018 season to take the lead in the World Driver Championship, a feat that Bottas has never done this far into the season. Being able to outrun his teammate and Five-time champion Hamilton will be a huge confidence booster for Bottas going into the rest of the season.

In two weeks time, the F1 season continues in Spain as Ferrari looks to bring the gap closer to the Mercedes who look for an incredible fifth consecutive one-two finish.

We all know who is going to win and place in F1, but still it is exciting to watch the race. Anything can change at any time on a given Sunday.