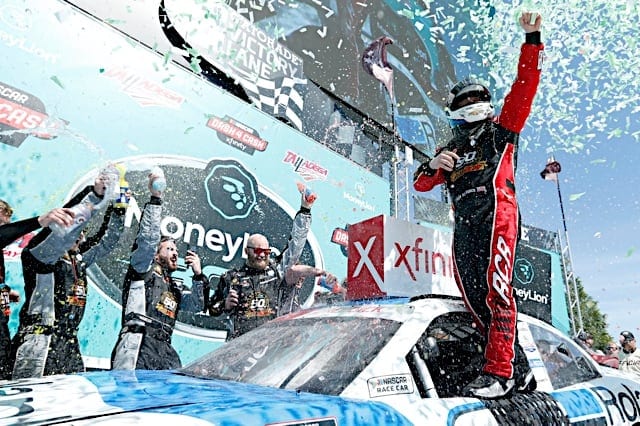 For Tyler Reddick, defending his 2018 NASCAR Xfinity Series championship was always going to be a difficult proposition.

Let’s start with the simple fact that Reddick was hardly the most dominant or perhaps even convincing champion. He won only two races in his title-winning campaign one year ago, and under the current system, taking the checkered flag in the first and last events of 2018 was enough to get the job done. Add in the switch from JR Motorsports to Richard Childress Racing for 2019 — which was always going to bring the potential for some growing pains and the almost inarguable sense that Christopher Bell was the favorite for the 2019 title — and it wasn’t an exaggeration to think that Reddick had an uphill battle to try to repeat.

That feeling only grew over the first eight races of this season, when Reddick was a factor but could never break through to grab a victory. It probably shouldn’t have come as a surprise that he finally did so at Talladega Superspeedway — he did win at Daytona to kick off 2018 after all — but it was the way he got his first victory of 2019 that should send a message.

And make no mistake, despite the unpredictable nature of superspeedway racing, Reddick’s Money Lion 300 triumph was one he and his team earned the hard way. Some of both the figurative and literal damage to the No. 2 Chevrolet was self-inflicted, in the form of a speeding penalty on pit road and contact with the outside wall that hardly left the car looking like a winner.

Reddick was also lucky and good when it mattered most. His good fortune came in the form of avoiding an incident with 19 laps to go that claimed Cole Custer and Michael Annett, among others.

The good part was Reddick’s ability to make all the right moves down the stretch, though he didn’t sound at all overconfident after claiming the victory and the second Dash 4 Cash $100,000 bonus payday.

“I tried to take us out of this race so many times, and somehow we got back into the mix and got back to the lead,” Reddick said.

The numbers don’t really tell the whole story, but Talladega was a much more interesting race from start to finish than Daytona. The Money Lion 300 featured 16 lead changes among 10 drivers while the season-opening NASCAR Racing Experience 300 had 13 lead changes among nine drivers. That doesn’t sound like a big difference.

If you recall, though, Annett was in front from laps 76 through 120 at Daytona, with cars either unable or unwilling to step out of the single-file line to try to challenge him. That certainly wasn’t the case this Saturday, when we saw four different leaders in the same final stretch of racing (and Bell twice), not to mention wrecks that caused cautions to boot.

So the good here is that Talladega was its own beast, which is certainly often the case, but rarely as dramatically as this year. Let’s hope that the next superspeedway race continues this trend.

Not a whole lot to speak of on Saturday, which is always good to be typing. If anything, it was the Dash 4 Cash competitors not getting to all race each other for the win. Both Annett and Justin Allgaier were involved in the wreck with 19 laps to go.

Allgaier has already had more than his share of “Bad” in 2019, with one more finish of 28th or worse than he had at this time last year along with one fewer top-five result and two less top 10s. The silver lining? Dover is next, and Allgaier won there last spring to cement a playoff spot on the first weekend of May. That’s some decent light at the end of his personal tunnel.

Take your pick from among the drivers who had hopes of contending for a victory and ended up seeing their vehicles shredded instead. Custer had his second finish of 30th or worse in 2019, though he already has a pair of victories to keep him from losing too much sleep.

Annett saw his superspeedway pendulum swing way the other direction after his Daytona win, coming home 31st. Jeffrey Earnhardt also had his worst day this season, finishing 26th after a late wreck.

Even one of this season’s deserving darlings, Ryan Sieg, had what for him was an off day when he also got caught up in the race’s most notable incident. Sieg ended up on the lead lap but in 16th, and it’s a testament to the performance of his RSS Racing team that it was also his lowest finish to date in 2019.

Alas, as Talladega taketh away from some drivers, it giveth to others, and boy did it ever on Saturday. That makes the perfect segue to…

Please go check out who ended up the runner-up if you haven’t seen already. It was Gray Gaulding, or to take a page out of the book of WWE superstar Seth Rollins, it was “Gray Freakin’ Gaulding.”

Prior to Saturday, Gaulding had made 83 starts across the three top NASCAR series’ and had just one top-five and two top-10 finishes to show for it. His previous career-best was a fourth-place in the Truck Series back in 2014, and he never cracked the top 10 in an Xfinity car, let alone challenged for a race win.

Gaulding did all of those things in his No. 08 Chevrolet on Saturday, and as you might expect, he was a little excited about it.

“Man, it was so, so close,” Gaulding said after Reddick had to block like an NFL offensive lineman to hold him off. “Man, what a day, baby. Talladega — let’s go!”

Amazingly, Gaulding will be in the running for the Dash 4 Cash money at Dover, vying with Reddick, Bell and Chase Briscoe. It will be the tallest of tasks to come away with the dough, but at least he’s got a chance.

Nor was his the only worthy underdog story of the day. Josh Williams (eighth) and Chris Cockrum (10th) also had career-best days. Kudos to both of them as well.

Reddick was the third different winner of the $100,000 bonus this season, following Custer and Bell. Could there be a fourth at Dover?

There’s a 50/50 chance by pure math, since Gaulding and Briscoe are in the running. The problem for them, though, is that Reddick and Bell have run up front here in the past, and they have not. Maybe they can hope the two top dogs wreck each other racing for the win…

“I was kind of the lone ranger out there. I think I just had to earn a lot of people’s respect.” – Gray Gaulding

“As soon as I missed that wreck when the 00 and the 1 got caught up, and I somehow missed it, and the 23 did a great job weaving his way out of it, too, I thought, ‘There must be a reason why I wasn’t in that wreck.'” – Tyler Reddick

“It was wonderful. I thought the car was really, really good. It felt a little free all day but it carried good speed in the corners. It means a lot to have a top 10 and a car in one piece.” – Landon Cassill, who earned a top-10 finish in his first Xfinity Series start of 2019 for JD Motorsports

A night and day difference from the first superspeedway race of the year, Talladega gave us a number of different leaders, some real drama and a close if not spectacular finish. Throw the underdog narratives on top for some tasty icing and it was a pretty delicious racing cake, if that even makes any sense as an analogy.

The Monster Mile looms, as Dover International Speedway hosts the Allied Steel Buildings 200 on Saturday, May 4. It’s the final Dash 4 Cash race for 2019, which is significant as it means no Cup Series drivers in an event that used to be dominated by their kind.

Allgaier and Bell are the only Xfinity Series drivers with victories at Dover after winning the spring and fall races, respectively, last year. Coverage is scheduled to begin at 1:30 p.m. ET on FS1.