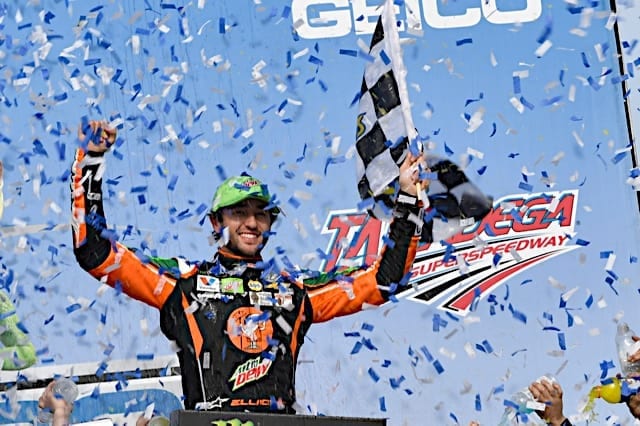 Are Chevy’s Struggles Over?

In the midst of a chaotic 500-mile race, Chevrolet stuck together and captured the victory Sunday (April 28) at Talladega Superspeedway. Hendrick Motorsports finished the race one-two, and a pair of rookies finished in the top five. In fact, six of the top 10 cars were Chevys. Three Fords and a Toyota were the remaining manufacturers that filled the top 10. Could this indicate a turn-around for the group?

As you may recall, Chase Elliott was one of three drivers to lead laps at Martinsville, though Brad Keselowski led 446. Elliott’s led 35 or more laps in four of the past five races this year. At Talladega, he led 45 laps, which was strong considering the amount of lead changes (37, among 15 drivers).

In contrast, Kyle Larson led 142 laps at Atlanta, but has since encountered terrible luck. From pit road penalties to crashing out of the race, Larson just hasn’t seemed to catch a break. His latest bout of trouble came Sunday on the final lap of the race. On the backstretch, William Byron was hit hard by David Ragan and came across the track. He hit Larson, who turned into Jeffrey Earnhardt, and both moved toward the inside wall. Larson’s car seemed to float in the air at an angle, hit the wall, and started tumbling. Thankfully all were ok after the wrecks.

The Fords and Toyotas appeared to draft with whoever they felt most comfortable at the time, though some of the Fords tried to work together during the race. The Chevys formed a line at the bottom, fairly unusual considering their previous preferred groove (outside lane near the wall).

Could their success be a result of the nature of the track? We’ll see this weekend at Dover International Speedway.

Talladega: A Track for Underdogs

The unpredictability of superspeedway racing often opens the door for new or underfunded contenders to excel. Such was the case in the Geico 500. Rookies Ryan Preece and Daniel Hemric earned top-five finishes (third and fifth, respectively). Brendan Gaughan, who started the race from the rear, finished eighth, and Corey LaJoie was 11th. Even Reed Sorenson had a top-20 finish (18th).

The finishing order didn’t necessarily reveal how well some of the underdogs performed. Justin Haley raced in the top 10 for much of the race until lap 180 where he was caught up in a late-race wreck. Chris Buescher was turned by Aric Almirola, and hit the wall hard. Buescher is another driver who typically performs well here and did so in this race until the crash. Matt DiBenedetto also was caught up in it. Who knows where these drivers would’ve finished had this incident not happened.

NASCAR knew coming to a superspeedway that speeds would be high, after a three-car Chevy test at Daytona with the tapered spacer and aero ducts package. They made adjustments to help lower those speeds, adding an extra inch to the rear spoiler and raising the height of the rear of the car by one inch. They found out just how fast cars were on Friday in opening practice, where speeds were around 202 mph. NASCAR felt they needed to lower the closing rate, so they required a wicker bill to be installed on the rear spoiler.

NASCAR says the wicker bills were necessary because the closing speeds were too fast (when we see 202mph, that's a full lap so closing speeds could be faster)

Before final practice #NASCAR had teams add a wicker to the rear spoilers to help slow the closing rates in the draft. pic.twitter.com/iHgKzxh3Ml

In final practice, six cars went over 204 mph, and many others at 202. Much of that was due to the amount of cars in the packs, rather than driving in a single-file line. Did the wicker perform as expected?

It seemed in the beginning of the race, the metal piece helped, until Bubba Wallace wrecked. It looked to me like he had a run going and didn’t want to hit his buddy Ryan Blaney, so he moved down below. Blaney appeared to try to block, and couldn’t, and the No. 43 got loose and crashed into Michael McDowell. Perhaps the closing speed was still a bit faster than what Wallace was used to driving previously.

Drivers still ran high speeds, a few even hitting 204 (including DiBenedetto and LaJoie). Green flag speed still remained in the mid 190s (highest was Harvick, who retired early from the race).

It remains to be seen whether NASCAR will do anything else to help reduce speeds at these superspeedways.

You would think that a driver who goes through pit road and on-track problems all throughout the race would succumb to a drastic ending. Such was not the case on Saturday (April 27) for Tyler Reddick. After winning Stage 1 over Ross Chastain, both drivers encountered an unusual speeding penalty. Chastain bumped Reddick a bit, to which Reddick sped up, and both had to restart the race at the rear. Both were in the top 10 within a few laps.

Reddick also hit the wall during the race, and the damage needed to be repaired. His crew members taped it up. However, Reddick took a jack stand from the pit box, and needed to do a stop and go. After all that trouble Reddick endured, he eventually returned to the lead in the closing laps, and won the race and the Dash 4 Cash $100,000 prize. All an inspiration to never give up when things don’t go your way.

Life as a TV Viewer

I didn’t watch the entire race due to another function I attended, but I followed along on Twitter, and throughout stage one and two I saw posts about missing action on the track. I didn’t think it was all that unusual, as it has happened for several years that I’ve watched NASCAR, but I did hope that the last half of the race would be palatable.

It was around 1 p.m. my time when I finally sat down to enjoy what little I could. Unfortunately, the amount of commercial breaks nearly turned me off from viewing it. It seemed like every 10 laps there was a break. There were only four side-by-side breaks in the broadcast according to this site. Thankfully, they decided to air the side-by-side in the final 30 laps or so.

Since NASCAR is so unique in the way business is run, I rarely compare it to other sports. NHRA aired on Fox Sports 1 after the race, and I noticed that the breaks came in between runs. Granted, it’s a sport where the cars have to be tuned and fixed between rounds, so the network adjusts the time for that.

Still, it’s hard not to compare NASCAR to the NFL, MLB, or any other sport that airs most of the game, with breaks airing for timeouts or penalty reviews. Hopefully things will start to look up for NASCAR, and improvements in airtime can be made.