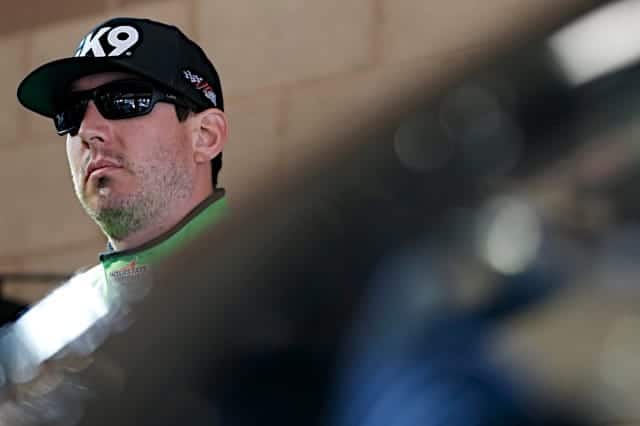 Is Kyle Busch right to speak out as he did?(Photo: Nigel Kinrade Photography)

Although not quite an Earnhardt, Chase Elliott took home his fourth career victory in front of a massive Elliott-favored crowed at Talladega last weekend. Can Elliott double down at Dover and prove he should be considered a championship threat?

Often considered as the most consistent Chevrolet driver this season, Kurt Busch led a train of bowties to the front at Talladega. With Chevrolet exploiting its superspeedway prowess, can Busch lead the brigade to better consistency for the manufacturer as a whole on short circuits?

Kevin Harvick‘s quiet season continues after being taken out by in a lap 11 accident. Is it time to lower our expectations about the 2014 champion?

Meanwhile, dawning a flashy new paint scheme, Harvick’s teammate Daniel Suarez put his aggressiveness all out on the line at the Alabama superspeedway. This new side of Suarez we’ve seen in 2019 has him knocking on the door of the top 10 in points. Will we be seeing the No. 41 in Victory Lane anytime soon?

Numerous questions are left unanswered after an exciting weekend of racing at the Talladega Superspeedway. This weekend, the Monster Energy NASCAR Cup series treks to the Dover International Speedway, and after crazy superspeedway competition, many drivers will hope to put Talladega behind them for the time being. In the week leading up to Dover, our Frontstrech had the difficult task of analyzing the twelve best driver in NASCAR at this very moment. With that, here are power rankings after Talladega…

Although he came away with a decent finish, Busch often found himself in shark-infested waters surrounded by strong Chevrolet and Ford alliances without a fellow Toyota in sight. Once the pioneer of manufacturer alliances at superspeedways, Toyota surprisingly found itself lagging behind. Yet, in the midst of the storm, Busch proved that he doesn’t need alliances to run up front.

“The clear leader in the field. Most stage wins, a staple in the top 10 week in and week out.” -Ed Coombs, Speedway Media

Although he may have looked like a favorite to win in the closing stages of the Geico 500, Logano found himself preoccupied with Kurt Busch’s No. 1 machine and missed a critical block of a line of Chevrolets with only a few laps to go, ultimately costing him the race. While disappointed at the result, Mr. Logano headed to Washington.

“Looked to be the dominant car until a Hendrick freight train overtook the Penske trio.” -Adam Cheek, Fronstretch

“I kept getting his car and Ryan Blaney’s car confused. I wonder if the ladies who swarm Blaney had the same problem.” -Michael Massie, Fronstretch

Keselowski waltzed his way into Talladega on the 10th anniversary weekend of his first career victory, an occasion that sparked controversy with cars landing on Ryan Newman again and a real-life Ricky Bobby. While Keselowski didn’t score the victory, he sure won the drifting competition.

As Keselowski spun around and entered his pit stall backwards, @Team_Penske was able to keep him on the lead lap and pit his car the unconventional way! #NASCARAmerica @SteveLetarte pic.twitter.com/JTdOWY4k6k

“Someday, I hope I will be just as good at parking as Keselowski spinning perfectly in his pit stall.” -Kobe Lambeth, Kobelambeth.com

“Slid into the pits like a guy into a girl’s DM’s.” -Rob Dutzar Jr, Rob’s NASCAR Blog

He came, he saw, he conquered.

Also, here’s to turning up, throwing down and cars that go real fast…

“Although Junior Johnson might be the ‘Last American Hero,’ Mr. Elliott might just be the hero of Alabama.” -Zach Gillispie, Frontstretch

“The kid from Dawsonville wins in Alabama! All is right in the world.” -Coombs

Although he didn’t get quite the damage Matt DiBenedetto or Chris Buescher sustained on the lap 181 melee, Truex never made it back to the front at Talladega. However, like Keselowski last week, he heads back to the sight of his first career victory this weekend. If he can’t win, maybe he can do something incredible like sliding into a pit box backward. Also, is Dover his home track, or is it Pocono? Wait, maybe it’s New Hampshire? Watkins Glen???

“Didn’t win his first superspeedway race, but did a nice burnout on the backstretch after being caught up in a crash.” -Cheek

Remember when Hamlin kept getting injured playing basketball. Well, for most of the day at Talladega, it looked just like that, as Hamlin limped around the 2.66-mile circuit for over 65 laps following a crash.

“He pretty much saved Brad Keselowski from disaster and if he didn’t do that, we wouldn’t have gotten a perfect park job by Keselowski. Hamlin deserves driver of the race just for that one.” -Jake Baskinger, Jake Baskinger on YouTube

As stated earlier, Kurt Busch helped lead the Chevrolet contingent to strong finishes at Talladega. To keep the momentum going, Busch needs to have a solid effort at Dover, a track that has not been too favorable to him in the past. Although he scored a win at the concrete Delaware track, it came over seven years ago driving for Team Penske. Yes, it’s been that long.

A hard-fought effort from the 1️⃣.

He may not have won, but @KurtBusch locked in another top 10 at @TalladegaSuperS, his sixth in the last eight races at the superspeedway. pic.twitter.com/gSHTnr6Q17

“Didn’t get enough retweets to wreck his brother and win. So he did neither at Talladega.” -Dutzar Jr

Ok, we know Harvick wrecked after being attacked by an out of control Clint Bowyer. However, the real question is, why doesn’t Busch Beer sponsor a Busch? The would-be marketing gold.

It is also surprising to see the Busch guy in civilization and not surrounded by things like trees… and campfires… and bears.

“I feel like he’s sucked all year, yet somehow he’s fourth in points. Did he get bonus points for roasting Bubba Wallace?” -Massie

For the first time in three weeks, we do not have to reset our counter…

Consecutive weeks with a top-10 finish: 1

“We had a really good @SmithfieldBrand Ford Mustang. I thought we had a car capable of winning but had just a few mistakes on my part and then a few things didn’t go my way."@Aric_Almirola finishes ninth in #GIECO500 at @TalladegaSuperS. https://t.co/5PrDU6NmKG pic.twitter.com/Dq19BgeLhc

Blaney prepared for Talladega’s chaos by doing this…

“Find you a friend like Bubba Wallace, who would rather wreck the field than wreck his buddy YRB.” -Massie

Plus, Coach Brian has Cash on the sticks, looking down on the competition, and Darrell Waltrip is a “cat.”

Well that sucked. Disappointed is an understatement. Knew it was coming, and where it was coming from. Just couldn’t get out of the hornets nest in time. Thank god we have @TocoWarranty. That car is in need of some repairs. Looking forward to @MonsterMile

“Give him a point for his shotgun-beer skills.” -Godwin Kelly, The Daytona Beach News-Journal

“Slowly but surely proving Gibbs made the wrong choice.” -Kelly

From not ranked to 4th for that win? Apparently Rick Hendrick is still paying people off.