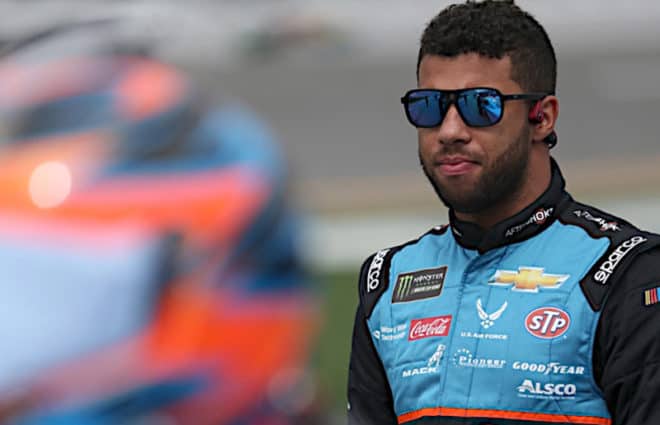 Bubba Wallace and Richard Petty Motorsports are not off to a good start in 2019.

The legendary No. 43 is 28th in points, with Wallace only ahead of three drivers who have ran every race. Wallace only has two top 20s and one lead-lap finish so far and has crashed out of two races.

This weekʻs question asks: Which party is to blame for these struggles – would RPM succeed with a new driver, or would Wallace be better served at a different team? Frontstretch’s Michael Massie and Vito Pugliese debate on this week’s 2-Headed Monster.

Give the King a New Knight

If Wallace doesn’t mature faster, then Petty should look for a better driver.

Petty is one of the greatest drivers and owners the sport has ever seen, and it looks so bad to see the No. 43 struggle on a weekly basis. Yes, the cars are not anywhere near as fast and dominant as they were in the King’s prime, but Wallace should still be doing a lot better.

RPM has a technical alliance with Richard Childress Racing. It’s fair to say they’re not getting the same exact equipment as RCR, but they aren’t even doing anywhere near as well as another team with a Childress alliance, Germain Racing. Ty Dillon has piloted Germain’s No. 13 to five top 20 finishes so far this season, and he was 21st in two other races. Dillon has also won two stages and finished sixth in the Daytona 500. That team seems to get more competitive every week.

Petty, however, is taking the same stuff Germain and Dillon are exceeding expectations with and struggling. That sounds like a driver issue.

This past week at Talladega Superspeedway, Wallace’s lack of maturity was on full display. The race was on its 11th lap and he was racing like it was the final lap. Wallace mistimed his attempt to pass Ryan Blaney and bumped his friend in the left rear. Then, instead of wrecking Blaney, Wallace elected to wreck himself and a bunch of cars behind him, leading to criticism from veterans Kevin Harvick and Clint Bowyer, among others.

There were a lot of laps left. The No. 43 looked fast — Wallace was in third at the time of the incident. With more patience, Wallace could have gotten his team a top 10, maybe even a top five, which would be huge given the current status of RPM.

I’m not saying Wallace is a talent-less bust. He just needs to mature as a driver and realize that he’s in a 20th place car, not a winning car. Tearing up equipment is no way to impress the better teams.

Last year, Wallace kept having brake problems, with the biggest incident resulting in a violent wreck at Pocono Raceway. That’s a driver issue. That tells me Wallace was abusing the brakes. He needs to realize RPM doesn’t have the best equipment and take it easy on it in order to be around at the end, much like Dillon is doing at Germain.

Just because RPM isn’t the flashiest of teams doesn’t mean Wallace doesn’t have every opportunity to succeed there. Aric Almirola won a race for the team in 2014 and had an arguably better 2015 where he almost pointed his way into the playoffs. Almirola had so many good runs for the team that it resulted in him landing a ride at Stewart-Haas Racing. RPM certainly didn’t ruin his career.

Wallace is not a bad driver — in fact, he shows the potential to be a great driver. But he has a lot of maturing to do and he needs to take better care of his equipment. If Wallace can’t improve in those areas, there are plenty of other drivers in the lower levels who would love to get behind the wheel of the King’s chariot. -Michael Massie

Speed=Money; How Slow Are You Willing to Go?

To single out Wallace as the issue at Richard Petty Motorsports is to look for a scapegoat and ignore the obvious.

RPM has been a team on the brink for the last couple of seasons. When Almirola left RPM for SHR at the end of 2017, he took the bulk of the sponsorship dollars with him. Since then, RPM has failed to bring in additional dollars, all the while having one of the most marketable drivers in the entire series. STP — a brand and sponsor that is synonymous with the No. 43, even bailed as a primary sponsor the weekend of Martinsville Speedway — a race they were even sponsoring.

There’s only so much you can reasonably do with a shoestring budget. This is professional auto racing. Money buys speed, plain and simple, technical alliance or otherwise. Why else do you think that Martin Truex Jr. ended up at Joe Gibbs Racing, sporting virtually the exact same sponsorship alignment as the prior two years at Furniture Row Racing?

Things got off to a great start last year for RPM — runner up in the Daytona 500 and a rousing performance at Bristol Motor Speedway that saw him drive up and take the lead from Kyle Busch late in the race, only to fade due to a tire strategy that didn’t quite pan out.

The rest of the season, the No. 43 team was fighting the same demons as all of the other Chevrolet teams. Take away Austin Dillon’s Daytona 500 win (courtesy of a Turn 3 bumper job on, of all people, Almirola), and Chevrolet teams went 32 races without a win from Richmond Raceway 2017 with Kyle Larson to August 2018 with Chase Elliott. This year isn’t much different. Chevrolet simply hasn’t been fast enough to come close to contending for a win, unless it’s a superspeedway or a short track.

Let’s be honest folks, Jimmie Johnson hasn’t forgotten how to drive a race car. The Camaro just isn’t on par with the Mustang and Camry, yet.

To me the issues are two-fold: You have a manufacturer in Chevrolet that has struggled the past two seasons with 11th hour rules and configuration changes and is slower to adapt or share information among themselves compared to the Ford and Toyota teams.

Then, there’s a single car team, who is relying on a major organization in RCR to help provide technical assistance — except that team has one veteran driver in Dillon and a rookie, Daniel Hemric. Hemric is 26th in points, two spots ahead of Wallace, though he has one top 10: Talladega this past weekend. As Michael pointed out, Ty Dillon is ahead of Wallace, but wouldn’t Richard Childress see to it that his grandson’s team had the same data his older brother has at Pop Pop’s shop?

Yeah, Wallace wadded one up this weekend single-handedly. Big deal, he was up front racing with his best friend and got a little excited about not getting lapped by the end of stage one. Yes, he could have been more patient, but how much more patient should he be with a team and ownership group that hasn’t been able to replace — and now maintain — what have been long-term partners providing much-needed funding? For a team that is already at a tremendous deficit of resources, a driver change isn’t going to do much of anything at this point. – Vito Pugliese

Michael Massie is a writer for Frontstretch. Massie, a Richmond, Va. native, has been a NASCAR superfan since childhood, when he frequented races at Richmond International Raceway. Massie is a lover of short track racing and travels around to the ones in his region. Outside of motorsports, the Virginia Tech grad can be seen cheering on his beloved Hokies.
@m_massie22
Previous Tyler Reddick Making Monster Energy NASCAR Cup Series Start at Kansas
Next Frontstretch Podcast: Corey LaJoie Talks Thrilling Talladega Weekend