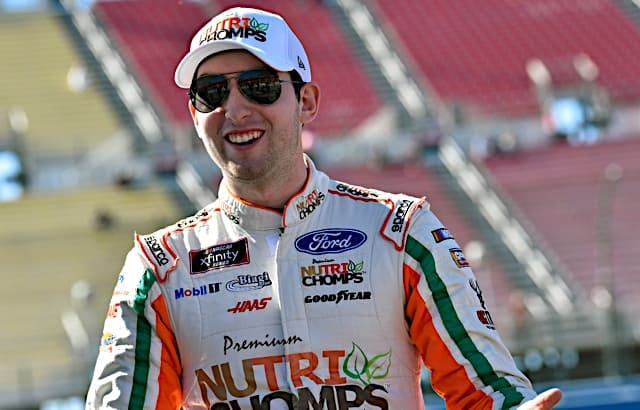 Chase Briscoe is one of the top young prospects in NASCAR. All you need to do is ask Ford Performance, those that kept him in rides during the 2018 season, whether it was stock cars or IMSA — the manufacturer believes in him.

However, 2018 wasn’t an easy year for Briscoe. Sure, he earned his first career NASCAR Xfinity Series victory at the Charlotte Motor Speedway ROVAL, but the Indiana native still didn’t feel he belonged. In 17 starts, that was his lone top-five, adding to just three more top 10s. Whenever he strapped inside the No. 60 Roush Fenway Racing Ford, he thought he was cursed, crashing out of three races.

“I felt it was the worst year of my stock car career for sure,” Briscoe told Frontstretch regarding his 2018 season. “It was just a struggle. We could never put good runs together. We never really ran up front. Winning Eldora [Speedway in the Gander Outdoor Truck Series] was big for my confidence. On the Xfinity side, I showed no promise whatsoever.

“I don’t think winning the ROVAL necessarily cemented that I should be here. But now that I’m running in the top five every week, I feel like I’m proving that I can do it. I was definitely frustrated last year.”

Briscoe admits that he could never get into a rhythm in 2018. That changed the week after Homestead-Miami Speedway, as Stewart-Haas Racing announced it had signed him for 2019, piloting the No. 98 car with a partnership with Biagi-DenBeste Racing.

The first couple races of the season were shaky for the No. 98 team. Briscoe finished 15th in the season-opening race at Daytona International Speedway, before finishing 15th at Atlanta Motor Speedway. Through the opening six races of the season, he recorded just six stage points and never finished above eighth in the first two stages of a race.

While Briscoe wasn’t scoring many stage points, he was, however, posting solid finishes. He earned an eighth-place finish at Las Vegas Motor Speedway and hasn’t finished outside the top 10 (seven consecutive races) since, adding four top fives to his record.

“We’ve just got to get better in the race, and a lot of that falls on me not knowing how to get our car ready for the race,” Briscoe mentioned. “If we can get stage points, I feel like we can gain a ton of spots in the point standings. We’ve been running well and contending for wins. We’re right there, we just have to put the whole weekend together.”

Of those four top fives in the past five races, three have been fourth-place finishes. The other was a fifth at Texas Motor Speedway. Since Briscoe began his top 10 streak in Sin City, he’s jumped eight positions in the point standings and is currently tied with John Hunter Nemechek for sixth.

It all goes back to earning stage points, which is what Briscoe believes has been the biggest struggle nine races into the season.

“Right now, I feel like we’re on the borderline of being one of those top four cars for Homestead,” he stated. “We just need to put the whole weekend together. If you give us the stage points the other guys have, we’d be easily top three in points. Obviously, that’s part of it, and we can’t change it now. We’ve had good speed and that’s all that matters.”

But now that there’s familiarity around Briscoe and he doesn’t have to jump back and forth between teams, he’s beginning to click with SHR.

“That was really hard last year going between Roush and SHR,” Briscoe said. “Every organization runs different — how they run their program, the cars run totally different. It was tough last year in those five races [with SHR] to take advantage of it because the cars ran so much different and how the spotters and crew chiefs being different.

“This year, being with the same team, same race car, the seats are the same, everything is the same. It’s been big, and as the year goes on, it’s going to continue getting better. I feel like once we get to the June, July area, we’ll be in a good position.”

Not only is Briscoe meshing well with his teammate Cole Custer, but also the Monster Energy NASCAR Cup Series drivers at SHR, including Kevin Harvick, Aric Almirola and Clint Bowyer, mentioning he leans heavily on Harvick. In the process, Briscoe also learns from fellow Indiana native and childhood hero Tony Stewart, who happens to be his boss.

“It’s really cool this year, but it was surreal last year when I found out I was going to run any races,” Briscoe said of running for SHR. “At the end of 2017, Joe Custer [Vice President of SHR] called me about just running Talladega for them because they didn’t have anybody to run it. I thought that was the coolest thing, being able to run one race for Stewart Haas. Now, it being the full-time deal is pretty unbelievable.”

Briscoe mentioned if he ever has a question for Stewart, the three-time Cup Series champion will call him in the “next five minutes” to discuss.

Last weekend at Talladega, Briscoe led nine laps, the first laps he’s led in 2019. The series heads to Dover International Speedway this weekend, where he has a 19th-place finish to his credit in his only start.