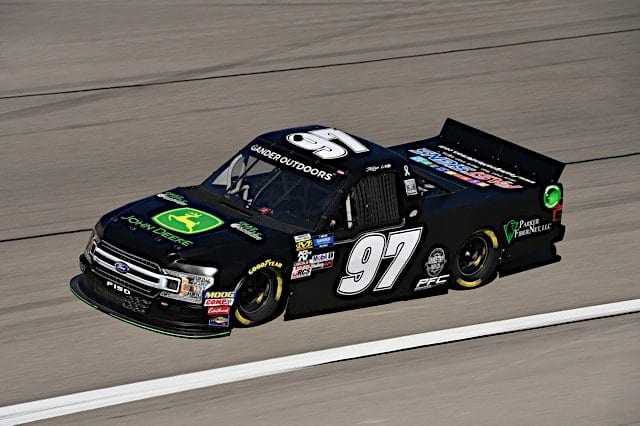 It’s hard to go into a race weekend at Dover International Speedway without mentioning Sauter. After all, he won the last two races at the facility, and last year, did so in dominant fashion, leading 137 laps en route to victory lane. If that’s not enough, the driver of the No. 13 Ford hasn’t finish outside the top 10 at the Monster Mile since 2012 when he finished 24th.

This season, after crashing out of the season-opener at Daytona International Speedway, Sauter has followed with four straight top-10 finishes, including a third-place run at Texas Motor Speedway the last time the series raced. He also scored a runner-up finish at Atlanta Motor Speedway in the second race of the season.

Having recently rejoined ThorSport Racing after three seasons with GMS Racing, Sauter is in a new environment that should, for the most part, be familiar to him. It helps that the organization has been particularly strong this season and seems to be clicking on all fronts.

That, combined with Sauter’s past success at Dover, could be just what the No. 13 team needs to find victory lane this weekend.

Simply put, Gilliland needs a win, and he needs one yesterday. His job at Kyle Busch Motorsports could end up in danger by the end of this year without one. With that said, he pulled off the victory in the ARCA Menards Series at Talladega Superspeedway last weekend, and while the win came in an ARCA car, which translates very little to how a truck races, there’s still a large benefit for Gilliland.

“It’s a huge relief, and I think it’s exactly what I needed to get my confidence up over on the Truck side too,” Gilliland said after the victory.

And that pretty much sums up what it seems Gilliland needed the most: a confidence boost. Given how close he’d come to finding victory lane on multiple occasions, not actually closing out the deal and grabbing the win likely had the sophomore driver wondering what he’s doing wrong.

Obviously, confidence alone isn’t going to win the race, but it’s amazing what it can do to help a driver get out of their heads and do what they know and love.

For the fourth time this season, Little will bring his family-owned No. 97 Ford out to play. This tiny organization has chosen its starts at tracks where it expects to find the most success. Despite only making nine starts last season, Little scored six top-10 finishes.

“I love Dover, always have,” Little said. “It’s been one of those race tracks for me that I’ve always run good – even if I don’t have the results to show for it, but it’s one of that tracks that suits me and I think we can go there and contend for a win.

“I’m excited to go to Dover and have the opportunity to showcase ourselves front and center,” he continued. “The last two years, we’ve had fast trucks, and I know that we’ll have more of the same on Friday. Our plan is to unload with what we know and adjust our truck from there. The track will change a lot from practice to the race, but I think its something we’re ready for and we’re determined to earn our first top-10 finish of the year.”

Perhaps what’s even more important about Little’s race on Friday is that he’ll be fighting for sponsorship. Currently, only five of the team’s six planned races have financial backing, and a strong run could make the difference between footing the bill out of pocket and signing a partner to expand the budget.

“We have a great team who can take a company’s dollar and stretch it a mile,” added Little. “We know that strong performances will enable us the opportunity to bring new marketing partners to the table, and I hope we can go to Dover and prove that.”

While it seems like it would just be more of a Cinderella story than anything, Little has found some success at Dover. He made his debut at the track in 2015, but crashed out after just 32 laps. Since then, though, he’s started fifth in the last two seasons and ended up ninth when the checkered flag flew last year.

In all likelihood, Little will probably run around the top 10 for a good chunk of the race, but if the cards fall right, he does have the capability to take advantage of a chance at the win.

This choice probably seems odd, but keeping an eye on Self this weekend and how he handles his return to competition will show quite a bit about his character. He was reinstated following an indefinite suspension in early April for violating NASCAR’s Substance Abuse Policy, courtesy of a failed random test at Daytona.

Maybe I’m just an eternal optimist, but based on some of the wording in his original apology, it appears the violation may actually have been a surprise. And instead of fighting the process, he participated in the Road to Recovery program and was deemed able to return to competition.

Hey guys – Thank you all so much for your continued support, encouragement, and prayers through this difficult season of my life.

Truly am looking forward to being back at home in the truck this weekend alongside my crew working hard to secure a great finish. ??

When Self returns to the track at Dover, don’t be surprised if he faces a plethora of questions about his suspension and yet chooses not to answer them. Instead, he’ll likely be much more focused than he already had been to show what he’s got behind the wheel of the No. 22 Chevrolet.

While I don’t really see Self competing for a win – the organization just isn’t quite to that point yet – it’s highly likely he’ll run in the top 15, perhaps even the top 10. He has just three starts this season, including a 10th-place finish at Daytona. He currently sits 18th in the standings, though he will not be eligible to race for the championship even if he were to make it back into the top eight or win before the playoffs begin.

A great opportunity with a great team. I can’t wait to get started. https://t.co/PG8vvg2MxZ