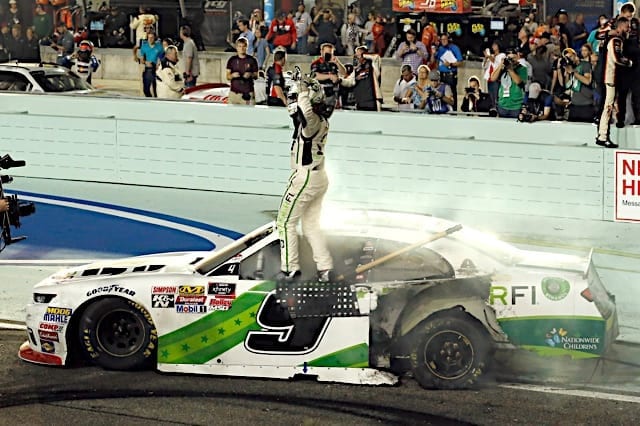 It seems like a recurring theme in this column is me coming back to the next generation of stars in NASCAR, the young 20-something-year-olds who are going to take the racing world by storm.

Christopher Bell and Cole Custer are similar names in the Xfinity Series. it’s only a matter of time before they make it to the Cup Series. Nobody’s questioning that.

You can loop Tyler Reddick in that group, too. Heck, he’s the defending champion for goodness’ sake. Maybe, just maybe, the Corning, Calif., native is better than his counterparts.

But where’s the love for Reddick?

Sure, he was driving JR Motorsports equipment. But Bell was wheeling a Joe Gibbs Racing Toyota and Reddick beat him straight up.

This season, he’s finished outside the top 10 once and the top five twice. He’s been the most consistent driver across the board and currently is in command of the points standings.

Yet he gets no love. And his social media game is A1; he’s been letting people know about it.

Uhm hey, it’s me again. What am I the redheaded stepchild you don’t want anyone to know about? https://t.co/m1xHagFZ7i

Oh this is great news! I thought I was a ghost for a minute… ? #ChampIsHere pic.twitter.com/TMPcygM2cs

As sarcastic as those tweets were, they hold a lot of truth. In a series where personalities are developed, along with driver skill sets and fan followings, Reddick has done all three perhaps better than anybody. Yet there’s all this focus on the others.

The other aspect to all this is his team: Richard Childress Racing. Let’s face it: RCR is a long way away from its glory days of the mid-2000s. But this season in the Cup Series, things have been looking a tad better. Austin Dillon has shown more speed, and with the promise of young Daniel Hemric, the organization could be looking at a resurgence (with a little help) in the coming years.

Reddick could be the major puzzle piece yet to be connected at RCR. The dude can drive. And he’ll let you know he can.

I’m sorry, but if you look closely. The trophy says “Champion”. It doesn’t say “got lucky”. ? pic.twitter.com/uFGq4IpDo1

He isn’t the stereotypical-looking racecar driver. He’s short (like shorter-than-Justin Allgaier short. Ain’t nothing wrong with that!) and isn’t the clean-cut, positivity-driven, no-feathers-ruffled type of guy.

Following his first Cup Series start, Bubba Wallace wasn’t too pleased with Reddick. So, as you can probably guess by now, he fired back.

Let me go throw a short track brake package on my car for you. Anything else you need crybaby? ?? https://t.co/0sVYcDkvwb

But don’t worry, they’re all good.

Wellll shoot… Now that I have your blessing, maybe I’ll start working on my next cup start! ? https://t.co/NDjeuaiZFz

Reddick’s skill set was put on display this past weekend at Talladega Superspeedway, where he earned his first victory of the 2019 season. Slicing and dicing to block runs, slamming the wall, damaging his No. 2 Chevrolet, only to rebound back and wind up in Victory Lane.

I’m not saying he’s going to be the next Jimmie Johnson, but this kid isn’t going to flame out like, frankly, a lot of drivers do. He doesn’t have funding coming along with him through the ranks, but by God does he have a lot of talent.

Thankfully, it’s coming to the forefront of many people in the industry, fans, drivers, and teams alike. Reddick will be a championship threat once again when Miami rolls around in 2019.

And before you know it, he might just be moving on up. Don’t say I didn’t tell you so.

“Bubba” giving him crap with his ahole tweets is a wonder. The lack of true introspection and self awareness that lacks in some drivers is amazing! Hey…wanna see me on social media playing my drums!!!!!!!! I am the greatest don’t ya know! SMH. Hang in there REDDICK….ignore the noise. Tis, just that noise. NASCAR has their favorites and promotes them to the point of getting many nauseous. Maybe one day in your lifetime NASCAR and the media can figure out how to spread the wealth! What we don’t need is any more promo’s of the likes of non producers like BUBBA, but more like you and others. The agenda they put forth is not winning any fans. NASCAR and the media and whoever else in charge of who gets the GOLD stars on their lapels and precious air time.