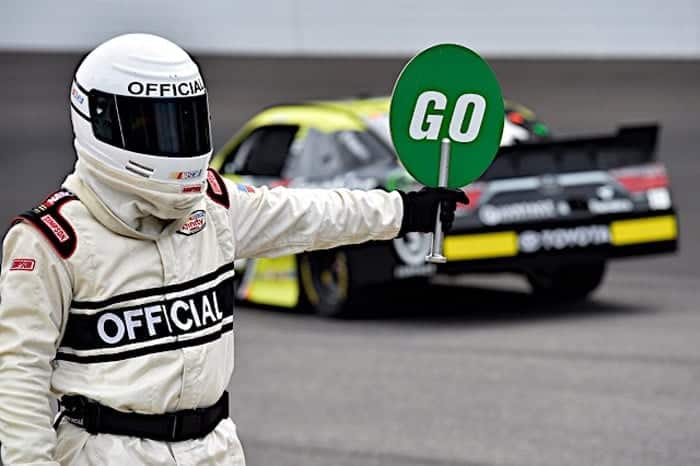 After Chase Elliott‘s victory on Sunday at Talladega Superspeedway in the Monster Energy NASCAR Cup Series, the never-ending playoffs discussion turned to his automatic eligibility for NASCAR’s postseason.

Since this version of the champion selection process was announced, the talking heads on the idiot box have continuously spouted that a win in the regular season automatically locked the driver into the playoffs.

But while statistically that has been true for most of the modern era, mathematically that is still a misstatement, even at this point of 2019.

In 2011, NASCAR changed the rules for making the playoffs to the top 10 in points and then two wildcard entries who were the two drivers with the most wins that were not in the top 10 in points. That was the precursor to the win-and-you’re-in mentality.

With the dawn of the 2014 season, the win-and-you’re-in mantra became the official belief of the broadcast partners. They shoved it down the public’s throat that if you won a race, you were guaranteed a playoff spot.

But that simply isn’t true. The rules currently state the playoffs will include 16 drivers: the drivers who have won races with the remaining spots will be filled with the top point earners who have not won a race. (And if a driver has won a race, he still has to be in the top 30 in points.)

Fortunately for the broadcast partners, they have yet to have to deal with the other scenario: more than 16 winners. Should a situation arise where more than 16 drivers win a race in the regular season, the top 16 winners in points will make the playoffs.

We have been close a couple of times, but we’ve never had to invoke that last caveat to the rules. It would be an amazing display of backpedaling to watch the network suits have to explain away six years of misstatement because they never thought something could happen.

But that’s not all; there are some other rules about which some NASCAR fans get confused.

For instance, the gasman can only gas the car. When NASCAR went to the latest iteration of the over-the-wall pit crew, the number of participants was capped at five. There is a jackman, a tire carrier, two tire changers and a gasman. The jackman and tire carrier can perform multiple jobs during the pit stop.

The gasman is given the opportunity to have one leg over the wall and on the ground in the pit stall as the car comes in for the pit stop. This is for safety reasons so that they are not jumping off of the wall with a 100-lb. gas can to attempt to service the car.

Because of this advantage, the gasman cannot perform any other functions during the stop. Should the gasman finish and climb completely over the wall, establishing that they are no longer in the box, then they or another crew member can come over the wall and perform other tasks. Generally speaking, that would be after crash damage. Attempting to do that on a normal pit stop would slow the action down so dramatically that there would be no benefit to the team.

Confusion comes in when a gasman hands the can over the wall but does not exit the pit stall. They are then still considered the gasman and cannot perform any other duties, including stopping a tire from rolling onto the pit lane. If they do that, the car has to start at the end of the longest line.

There is also confusion over the crash damage policy. In 2018, the timer went from five minutes to six. That timer is for any time that the car is on pit road from the first time it enters with crash damage until it returns to minimum speed or is parked.

In the past, if more than the allotted pit crew went over the wall to work on the car, the car was parked for the event. Starting last year, that changed to a two-lap penalty.

Another rule that confuses fans is that the polesitter must be the first to cross the starting line at the beginning of the race. On subsequent restarts throughout the race the leader controls the restart and is the first person to accelerate in the restart zone, but they can be beaten to the line. On the initial start of the race, by rule, the polesitter must be the first across the line.

Also, on starts and restarts the cars must maintain their lane until the race resumes and cannot pass to the inside until they pass the starting line.

Finally, on restarts, when the field is coming to take the green, for the vast majority of the tracks, the field is to be set in turn 3. If a driver is jockeying for position, they have to stop and accept where they are in turn 3 whether they feel it is their right position or not.

Probably the biggest misconception about the NASCAR rulebook, and it applies to many of the rules enforced across the race weekends, is that there are tolerances. A perfect example is speeding on pit lane. If a speed limit is defined for a given track, the officials give the drivers a 5 mph buffer. So when someone is busted for speeding at Dover International Speedway, they weren’t going slightly over the 35 mph limit — they were going over the 5 mph cushion, which is over 40 mph. Additionally, when a car is too low or too high or too narrow, it isn’t just in violation of the rule but also the tolerance. Teams will tell you that if you aren’t using every minuscule amount then someone else will and you’ll be beaten.

In the end, the NASCAR rulebook is filled to overflowing with enough technical specifications to make an engineer vomit. It is challenge to enforce them all and that is why some of them are enforced very black and white, like when a  crew member is over the wall too soon when they just put a hand in the box to settle themselves.

The one thing to remember, which started this whole trip down judgment lane? Just because you win, you aren’t guaranteed a place in the playoffs. But you’re awfully darn close.

So we’ll just keep saying win and your in until it is proven wrong. Seems trivial to worry about. I doubt there are more than 16 winners in the first 26 races more than once every 25 years. It’s also true that someone could win the first 35 races and lose the championship, but that hasn’t happened yet either.