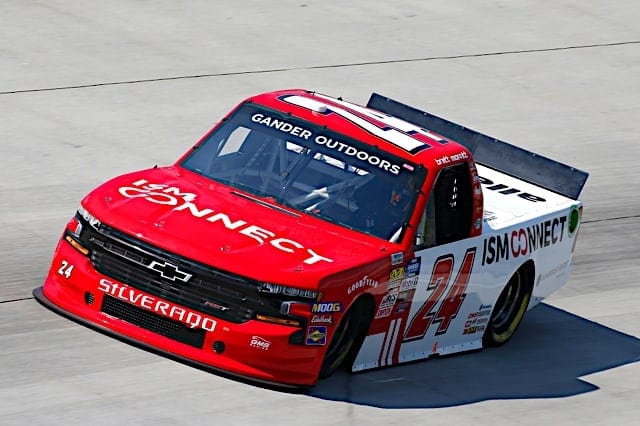 When Brett Moffitt won the pole for Friday’s (May 3) JEGS 200 at Dover International Speedway by two-tenths of a second, it was clear he had a good Chevrolet Silverado. And to a degree, he had a career day.

Moffitt led a career-high 78 laps at Dover before getting passed by eventual race winner Johnny Sauter in lapped traffic. Moffitt was none-to-pleased with the lapped traffic post-race.

“When lapped cars are racing two-wide like idiots in front of the leader you can catch them [the leader],” Moffitt said after the race. “That’s about it.

“NASCAR is doing a really poor job of watching minimum speed, in my opinion. The [No.] 49 shouldn’t be out there. He’s four seconds off the pace and it’s just dangerous when we catch him. Then, he’s two-wide with another lapped car when we catch him and it just puts us all in a bad situation.”

Moffitt is alluding to being stuck behind Ray Ciccarelli and another lapped truck while being the leader. Sauter got by for the lead, as did Sheldon Creed in the second stage.

Once Moffitt lost the lead, he was never able to regain it, racing between second and fourth position for much of the remainder of the race. Even a late restart with five laps to go wasn’t enough to help the No. 24 truck get past Sauter.

“We lost some track position from some lapped cars racing about three seconds off the pace,” Moffitt stated. “We just never got the track position back. The restart there at the end, the bottom is pretty much impossible to pass the guy on the top. It was what it was. Lucky to hang on to second. It was a good day for us, just not what we wanted.

“Outcome was the same either way. The clean air is so big here that I could catch Johnny, [but] as soon as I’d do that I’d get into his dirty air and fall back. It was just that sequence that you could watch all race long. It’s all about track position here, especially in the trucks.”

Despite the stage one victory, earning his first playoff point of 2019, Moffitt was disappointed in the runner-up finish. Moving forward, he wants NASCAR to take a look at lapped cars and the speed those cars are running.

“All of the truck races, they need to pay more attention or stricken it up,” he said of NASCAR looking at lapped traffic not meeting minimum speed. “At Vegas, it’s dangerous when we catch him. Here, it’s not really dangerous, but it messes up the race for the win when they’re back there just riding around.”

The series heads to Kansas Speedway next week where Moffitt has two career starts in the Truck Series, placing a best of seventh in 2017 with Red Horse Racing.