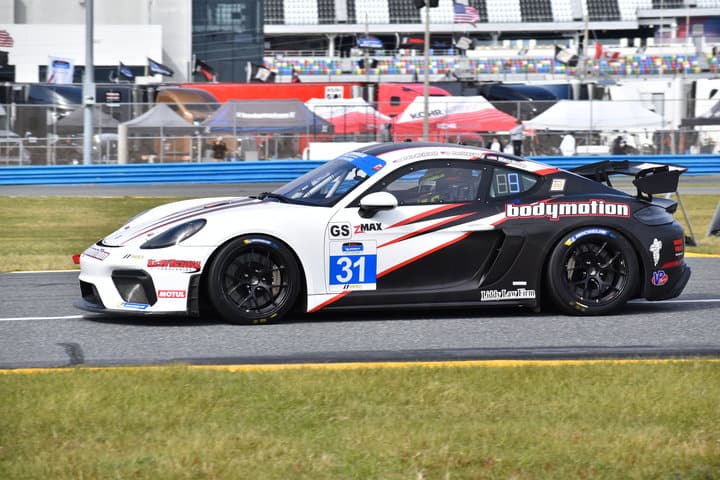 For Saturday’s IMSA Michelin Pilot Challenge Mid-Ohio 120, there are 37 cars entered, down from 43 at Sebring.  Most of the changes are in the headlining Grand Sport class.

In Grand Sport, there are a number of teams that raced at Sebring that are not entered this weekend.  Likely the most notable is Multimatic Motorsports.  That team is part-time this season and will return later on.

Rennsport One’s No. 28 Porsche is not entered, along with the second Audi from CarBahn Motorsports.  The third KohR Motorsports Ford Mustang GT4 is not only not entered, but got destroyed last weekend at VIRginia International Raceway.

Bodymotion Racing, which raced at Daytona, returns with an all-new lineup.  The team has partnered with JCR Motorsports, a team that has previously raced Maserati GT4s in Pirelli World Challenge’s GTS class.  Jeff Courtney and Fred Roberts will drive the No. 31 Porsche, replacing Marc Miller, Patrick Liddy and Pete McIntosh.

In TCR, there are 14 entries, down from 15 at Sebring.  The second entry from JDC-Miller MotorSports (No. 17) is not entered.  A number of TCR teams are likely happy to see that as Britt Casey Jr. had a great weekend at VIR last weekend.  The other team not entered is eEuroparts.com ROWE Racing’s No. 10 Audi for Lee Carpentier and Kieron O’Rourke.  This duo has competed in all 12 TCR races to date in the series.

There is one newcomer this weekend, Mark Motors Racing with their Audi RS3 LMS Club Sport.  Marco Cirone and Remo Ruscitti will drive.  This team has not previously competed in the IMSA Michelin Pilot Challenge, but raced in last year’s IMSA Michelin Encore at Sebring International Raceway.

The Mid-Ohio 120 is scheduled to go green at 1:50 p.m. Saturday afternoon.  The race will be streamed live at IMSA.com and FansChoice.tv.

They should rename this series the German sport coupes Cup. The bias is just over the top this year. Totally uninteresting.