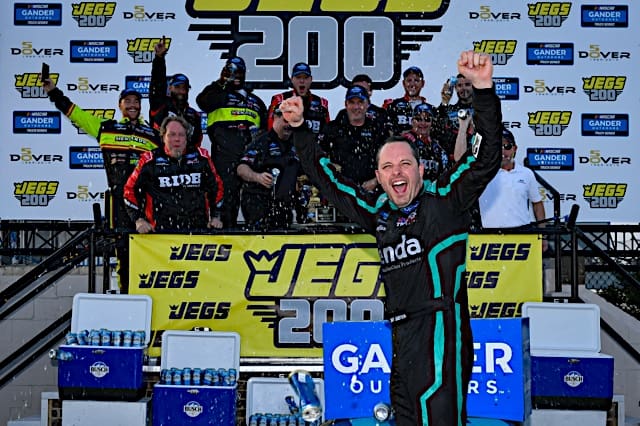 ThorSport Racing’s Johnny Sauter was able to recover from a costly pit stop and his truck stalling under caution to pass Ben Rhodes for the lead with 30 laps to go.  From there, Sauter was able to hold off a charging Brett Moffitt to claim his 24th career Gander Outdoors Truck Series victory and his third straight at Dover.  Not too shabby for a driver that got dropped from his previous ride despite six wins in 2018.

“When you get kicked to the curb, you feel like you have a lot to prove.” Sauter said to FOX Sports 1’s Alan Cavanna in victory lane.  “A couple of months ago, I didn’t know if I’d be racing here.  I shut the motor off earlier and I was thinking, ‘well, [there goes my chance.]  Experience paid off being able to go to the top [line].”

Moffitt started from the pole and led the entire first stage of the race.  Despite that, Sauter was never far behind.  Lapped traffic was never far away and the speed disparity was enough to cause some issues.  Every time that Moffitt opened a decent gap, another lapped truck allowed Sauter to catch back up.

The second stage saw Sheldon Creed dispatch of Sauter and move up into contention.  With the help of lapped traffic, Creed was able to run down his GMS Racing teammate.  However, once Creed ran down Moffitt, they approached Spencer Boyd and Ray Ciccarelli running side-by-side.  The slower trucks held up both Moffitt and Creed, allowing Sauter to come from third to take the lead.  From there, Sauter held on to win the stage.

Creed won the race off pit road and managed to lead 59 of the next 61 laps.  A caution for Austin Wayne Self (back from a Substance Abuse Policy suspension after completing NASCAR’s Road to Recovery) crashing on the frontstretch brought everyone in for their final stops.  Creed took four tires and fell back while Ben Rhodes took two tires to grab the lead.

Creed’s excellent day came to an end just after the restart when he spun exiting Turn 2 and hit Todd Gilliland, heavily damaging the front end of his No. 2 Chevrolet.  The GMS Racing team attempted to repair Creed’s truck, but the damage was too great.  Creed was classified in 27th at the finish.

Two tires got Rhodes the lead, but he simply could not hang with Sauter.  Sauter snagged the lead a few laps after the restart and never looked back.

Moffitt was close behind in second.  Harrison Burton tied his career-best finish in third, while ThorSport teammates Grant Enfinger and Matt Crafton were fourth and fifth.

In Crafton’s case, it was nothing short of an adventure just to get to fifth.  After encountering issues under the hood, the No. 88 team changed the engine prior to qualifying, resulting in Crafton having to start in the rear.  Crafton charged from the back to get into the top 10, then dropped back with a loss of power.  A pit stop revealed that a plug wire had come loose.  Once that was put back in it’s proper place, Crafton was able to charge back up the order.

Ben Rhodes used a two-tire stop to lead laps, but dropped back to finish sixth.  Daytona winner Austin Hill was seventh, followed by Derek Kraus and Tyler Ankrum.  Ross Chastain finished 10th after this spectacular save in turn 1 with 21 laps to go.

Gilliland is under the gun from team owner Kyle Busch to improve his performance.  He did himself no favors Friday, although he was not to blame for either of his issues.  While running 14th, Self spun exiting turn 4 directly in front of him.  Gilliland ended up hitting Self in the passenger door before the No. 22 Chevrolet spun into the inside wall.

Shortly afterward, Creed spun on the restart exiting turn 2 and wedged Gilliland between the No. 2 and the inside wall.  The hit did quite a bit of damage to the Mobil 1 Toyota.  After repairs, Gilliland continued and eventually finished 15th as the last driver on the lead lap.

By virtue of his fourth-place finish, Enfinger has retaken the points lead from Stewart Friesen, who dealt with an ill-handling Halmar International Chevrolet and finished 11th.  Enfinger’s points lead is a mere four points over Sauter.

The Gander Outdoors Truck Series teams don’t get much time to rest.  They’ll be back in action next Friday night at Kansas Speedway in the Digital Ally 250.  Coverage is scheduled to start at 8 p.m. ET on FOX Sports 1.