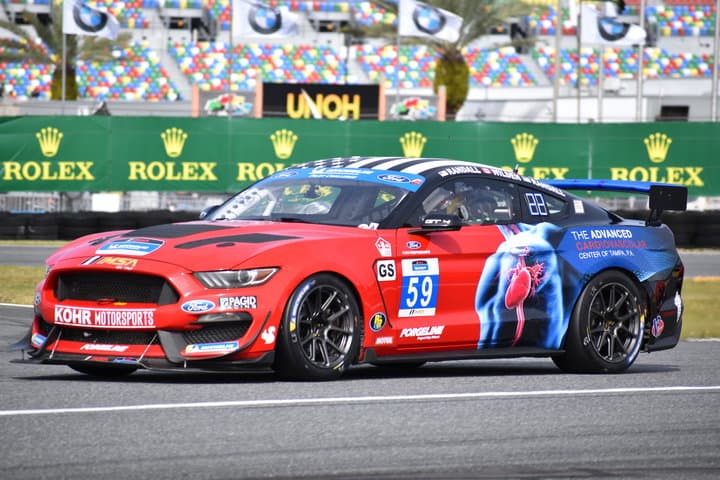 IMSA Michelin Pilot Challenge teams had to deal with a wet track Friday (May 3) at Mid-Ohio Sports Car Challenge.  With a later second session, the circuit had dried out quite a bit more, allowing for quicker times in the afternoon.  KohR Motorsports’ Kenny Wilden was fastest on the day with a lap at 87.002 mph.

Unlike the IMSA WeatherTech SportsCar Championship teams, Michelin Pilot Challenge teams don’t get a full practice session Saturday, so teams had to take advantage of the wet running when they could.  The first session was held in steady rain and resulted in a jumbled result.

EEuroparts.com ROWE Racing’s Kenton Koch set the fastest lap of the session at 75.478 mph before the halfway point of the session.  Up until the last few minutes, it was more than two seconds faster than anyone else.

In the last couple of minutes of practice, Andrew Wotjeczko Autosport’s Scott Hargrove closed that margin down to two-thirds of a second in his Porsche.  Winward Racing/HTP Motorsport’s Indy Dontje was third fastest in the Mobil 1-sponsored Mercedes, while Corey Fergus was fourth in the Motorsport in Action McLaren.  Sebring winner Tyler McQuarrie was fifth fastest.

The TCR class saw Atlanta Speedwerks’ Todd Lamb turn in a lap at 72.542 mph in the closing minutes of the session to top the class, good enough for 10th overall.  Lamb’s lap was two-tenths of a second faster than LA Honda World Racing’s Mat Pombo in the No. 73 Honda.  Bryan Herta Autosport with Curb-Agajanian’s Mark Wilkins was third in his Hyundai, while Remo Ruscitti was fourth in the Mark Motors Audi.  HART’s Ryan Eversley was fifth fastest.

In the late afternoon practice session, the track was still drying, but tricky.  11 of the 37 teams entered chose to skip the session in order to save their cars for Saturday.

The session saw no less than three red flags slow the proceedings.  Late in the session, Wilden put the best lap of the day in his Ford Mustang GT4.  Wilden’s lap was nearly three-tenths of a second faster than the similar Mustang of PF Racing’s Jade Buford, one of the most experienced drivers in a Mustang GT4.

In TCR, Wilkins was quickest in his Hyundai Veloster N TCR with a lap at 85.971 mph, good enough for sixth overall.  Wilkins’ lap was more than two seconds faster than Shelby Blackstock in LA Honda World Racing’s No. 37 Honda Civic Type-R TCR.  Alex Popow in the No. 3 Alfa Romeo was nearly three seconds off of Wilkins’ pace in third, followed by Eversley.  Harry Gottsacker in the second Hyundai was fifth.

Michelin Pilot Challenge teams will have a brief 15-minute practice session Saturday morning, then go directly into qualifying at 9:45 a.m. ET.  The session is not televised, but we’ll have a recap of the qualifying session tomorrow here at Frontstretch.

Kenny Wildman is no slouch when it comes to pony car racing having come from the rigors of the Players/GM Series of old and a championship therein. Did IMSA finally decide to give some BOP love to the Mustangs? Are they actually going to let a non-German car be competitive? I guess we’ll find out later today. I’m guessing it’ll be another PorscheAudiMBBMW that wins.