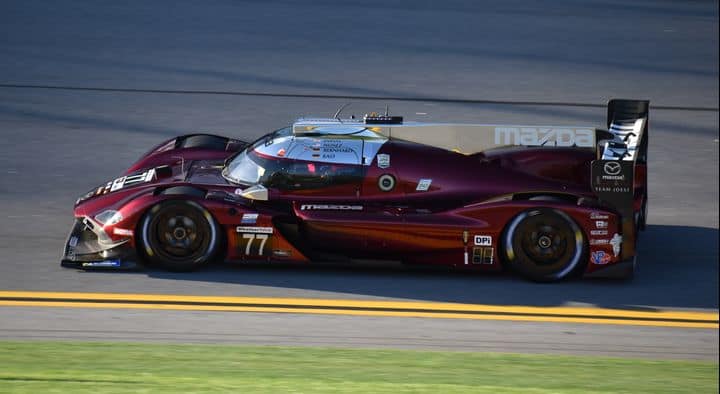 IMSA WeatherTech SportsCar Championship teams Friday (May 3) at Mid-Ohio Sports Car Course were greeted with rain and mud.  Naturally, this cut down on actual lapping in practice.  Mazda Team Joest’s Oliver Jarvis was fastest overall with a lap at 92.207 mph.

The first practice of the day was held in steady rain.  With no rain in the forecast for either Saturday or Sunday, a good chunk of the field chose to sit out the session.  Only 22 of the 36 teams set times.

Of those 22 teams to set times, the fastest was Acura Team Penske’s Juan Pablo Montoya.  Montoya turned in a lap at 80.033 mph around the treacherous 2.258-mile road course to lead the way.  Montoya topped the session despite stopping on-course at one point, drawing a red flag.

Only three of the 11 DPis set times in the session.  Montoya’s lap was more than three seconds faster than CORE autosport’s Colin Braun.  Ricky Taylor in the second Acura was third quickest.  Neither of the LMP2 entries left the paddock during the session.

The wet weather served as a time equalizer.  Porsche GT Team’s Earl Bamber did well to top the GT Le Mans with a lap at 79.515 mph, good for second overall, just two-thirds of a second behind Montoya.  What he has not done all that well is keep himself clean.  These pictures, capped off of teammate Laurens Vanthoor‘s Instagram live by Anthony Florio, is the result of Bamber trying to give Vanthoor’s rental car a push in the parking lot on Thursday.

Bamber’s lap was one and five-eights of another second faster than BMW Team RLL’s Tom Blomqvist.  Corvette Racing’s Oliver Gavin was third in his No. 4 Chevrolet, while Patrick Pilet was fourth in the second Porsche.  Jan Magnussen was fifth quickest.

GT Daytona saw Meyer Shank Racing with Curb-Agajanian’s Trent Hindman top the charts in his team’s home race.  Hindman’s lap at 76.220 mph was good enough for eighth overall.  The lap was four-tenths of a second faster than PFAFF Motorsports’ Zacharie Robichon in a Porsche.

Moorespeed’s Alex Riberas was third fastest in his Audi, but things weren’t all great for the team.  Partway through the session, teammate Will Hardeman spun in Turn 6, splashed through the mud and hit the tires.  Hardeman was able to extricate his Audi from the barrier and drive back to the pits without too much of a problem.

AVS Vasser Sullivan’s Jack Hawksworth was fourth fastest in the No. 14 Lexus, while Turner Motorsport’s Bill Auberlen was fifth.

The second practice session started out much like the first, but the rain eventually stopped.  The track gradually dried throughout the session, but the combination of wet patches and running water meant that the surface stayed treacherous.

Taylor discovered how dangerous the drying track was in the opening minutes when he spun his Acura ARX-05 in Turn 12 and hit the tires at pit in.  The incident brought out the red flag and neutralized the session for eight minutes.

Hardeman’s troubles from early in the day actually continued in the afternoon.  25 minutes into the session, he spun his Audi and got it stuck in a gravel trap in Turn 12 near where Taylor had crashed.  This time, Hardeman brought out a red flag.

In the closing minutes, Jarvis was able to put down his quick lap of the day.  Despite being fastest overall, Jarvis’ best lap was still a full 15 seconds slower than the best laps from last year.

Jarvis’ lap was six-hundredths of a second faster than temporary teammate Ryan Hunter-Reay, who wasted no time getting up to speed in the Mazda RT24-P.  JDC-Miller MotorSports’ Simon Trummer was third fastest in the best of the Cadillacs.  Teammate Misha Goikhberg was right behind Trummer in fourth, while Helio Castroneves was able to turn in the fifth fastest time after Taylor’s crash.

The changeable conditions did led to a jumbled overall order.  Hawksworth’s fastest lap in the GT Daytona-class Lexus at 90.130 mph was good enough for sixth overall, more than three seconds faster than Robichon, Park Place Motorsports’ Marco Seefried was third in his Porsche, then Mario Farnbacher in the No. 86 Acura.  Robby Foley in the Turner BMW was fifth.

With no real dry running on Friday, Practice No. 3 Saturday morning will be crucial.  However, it is scheduled for 8 a.m., so what the teams learn could be limited simply by the early hour.