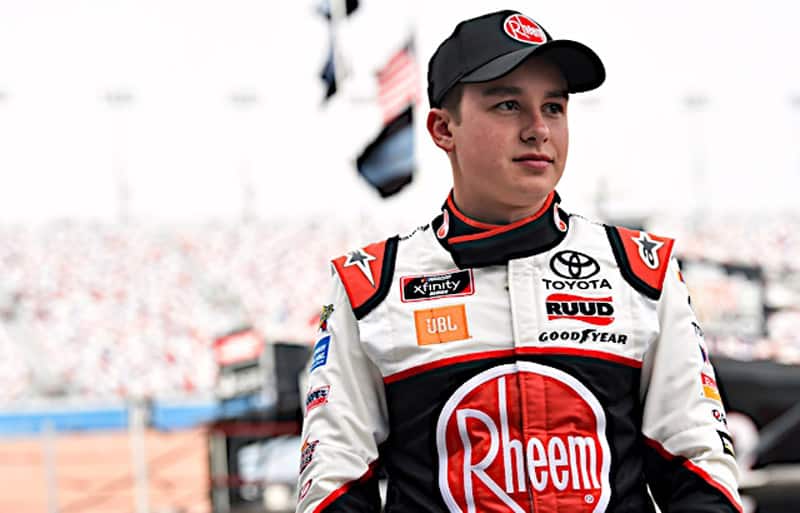 “Over the last couple of weeks, we’ve had really fast race cars,” Bell said in victory lane. “But this one’s really out to my pit crew, they did a great job getting me out first there where I could control the restarts. I knew once we got out front we’d be tough to beat… At this place, you can pass on green flag runs, it’s one of my favorite racetracks because you can move around and find different lines to get going. But over the short run, it’s pretty difficult to make it happen because there’s so much grip on the bottom.”

Custer won the first two stages of the race en route to leading the first 155 laps. However, he ended up having to settle for fourth after failing to recover from losing his lead. Bell’s surge to the front on pit road was the one of just two lead changes in the event. It was a race where clean air became a huge benefit to whomever was leading the race under green-flag conditions.

Justin Allgaier finished second while Reddick ended up third. Briscoe, third among the four Dash 4 Cash drivers, finished fifth after making a late charge to the second row for the final restart. The fourth contender, Gaulding, ran 20th after not really being a factor all day and wrecking with a handful of laps to go.

There were some late-race fireworks for a race that was, at one point, largely devoid of drama. The first non-stage ending caution came on lap 154 when Kaz Grala spun out entering turn 3, courtesy a bump by John Hunter Nemechek. Grala had minimal damage on his Richard Childress Racing Chevrolet and finished 14th.

Then, on lap 175, Riley Herbst pulled off a rare Dover half-spin on the frontstretch. He was able to avoid hitting anything but the incident brought out the fourth of five caution flags.

The lap 181 restart from that crash was the most aggressive of the afternoon. Reddick and Allgaier almost wrecked racing for second but hung on as Bell pulled away. Meanwhile, Gaulding spun out in turn 1 on the following lap and collected Vinnie Miller. The multi-car incident forced one final restart but Bell was never seriously challenged and scooted away.

Austin Cindric was sixth in the race followed by Brandon Jones. Behind them, exiting turn 4 on the final lap, John Hunter Nemechek and Zane Smith made contact. Both cars went hard into the wall after crossing the line eighth and ninth. Justin Haley was 10th followed by another strong run for Ryan Sieg, who made up two laps on the afternoon to come home 11th.

Further back, it was a tough day for Noah Gragson. Gragson had go to the rear at the start of the race due to unapproved adjustments, then got some damage late in stage one from brushing the wall. Gragson then had a loose wheel that required an unscheduled late-race restart and hit the wall again with a lap to go. The JR Motorsports driver limped around the track to finish 19th.

Custer dominated, leading all 45 laps. There was a great duel in the closing laps of this stage between Allgaier and Bell for second. Bell ended up beating Allgaier for second, but couldn’t quite catch Custer for the lead.

Custer drove away from the rest of the field, having as large a lead as three seconds with 10 laps to go. Reddick spent most of this stage in second but was passed by Bell with a handful of laps to go.

There were no cautions in the first two stages outside of stage breaks. Now, the Xfinity Series takes a few weeks off before returning for a 300-mile race at Charlotte Motor Speedway on Saturday, May 25.