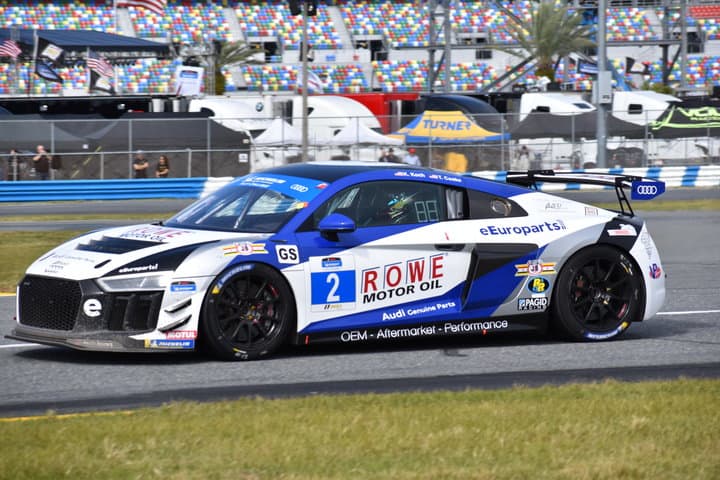 Saturday morning (May 4) brought a very unusual qualifying session for IMSA Michelin Pilot Challenge teams at Mid-Ohio Sports Car Course.  Officials declared mixed conditions, meaning that teams could qualify on either wet or dry tires.  However, the conditions differed between the two sessions. It forced IMSA to use Section 40.2.11 of the IMSA Sporting Regulations, entitled Other Means To Set The Grid. As a result, IMSA set the grid in the order of the classes, regardless of lap times.  Likely the best example of these rules being used was in qualifying for the 2016 Rolex 24 at Daytona.

In the Grand Sport session, eEuroparts.com ROWE Racing’s Kenton Koch recaptured the pace that he showed in the wet opening practice session Friday.  Koch turned in a lap at 78.026 mph to win the pole for today’s Mid-Ohio 120.

BimmerWorld Racing’s James Clay will start sixth in his BMW while Robby Foley will start his similar car seventh.  Orey Fidani will start eighth in his Porsche followed by Jeff Mosing in the No. 56 Murillo Racing Mercedes.  Nate Stacy will start 10th in the best of the Ford Mustang GT4s.

In the TCR session, HART’s Chad Gilsinger made the decision to spend the 15-minute track time prior to qualifying warming up his tires.  That proved to be critical.  In dicey on-track conditions, Gilsinger was able to lap the 2.258-mile circuit at an average speed of 79.705 mph.  That lap held up through the whole Grand Sport qualifying session to leave Gilsinger as the fastest driver overall in his Honda Civic Type-R TCR.

Gilsinger’s lap was more than a second and a half faster than KMW Motorsports with TMR Engineering’s Mark Kvamme in the No. 3 Alfa Romeo Giuletta TCR.  Atlanta Speedwerks’ Brian Henderson will start third in class, followed by the Audi of Nick Galante for Fast MD Racing.  Mark Wilkins, who was fastest in TCR practice on Friday in his Hyundai, will start fifth in class.

The Mid-Ohio 120 will go green around 1:45 p.m. ET Saturday afternoon.  The race will be streamed live on both IMSA.com and FansChoice.tv.  Tape-delayed TV coverage of the race is scheduled for Saturday, May 11 at 11 p.m. on NBCSN.