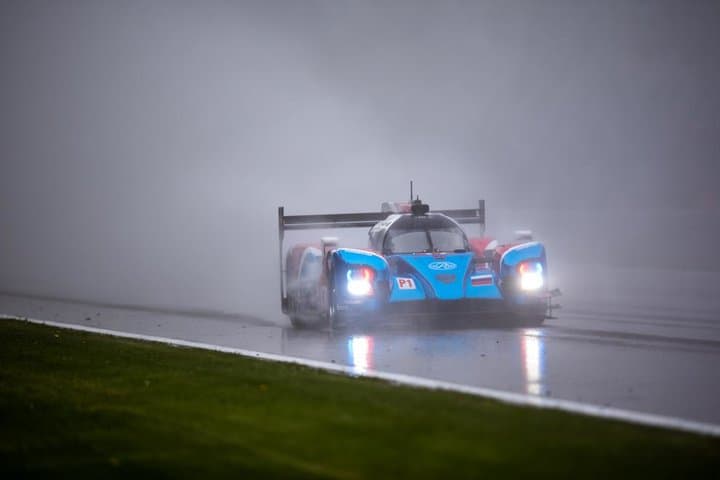 After a rare defeat at the hands of SMP Racing in Free Practice No. 1 on Thursday, Toyota GAZOO Racing’s Mike Conway and Kamui Kobayashi got down to business Friday (May 3) and claimed the overall pole for Saturday’s 6 Hours of Spa-Francorchamps.

Conway and Kobayashi averaged a speed of 137.737 mph over their best two laps in the session.  This average was nearly a half a second faster than Sebastien Buemi and Kazuki Nakajima in the second Toyota.  SMP Racing’s No. 17 BR Engineering BR1 -AER (shown above in the rain on Thursday) was less than a second off with the duo of Egor Orudzhev and Sergey Sirotkin.

In LMP2, G-Drive Racing continued their strong form.  The pairing of Jean-Eric Vergne and rookie Job Van Uitert put down an average lap speed of 129.831 mph to claim the class pole and the seventh starting spot.  Vergne’s best lap of 130.557 mph is a track record for LMP2.

G-Drive’s average lap was a half a second faster than Jackie Chan DC Racing’s No. 38 of Gabriel Aubry and Stephane Richelmi.  The No. 37 Jackie Chan DC Racing entry for Will Stevens and David Heinemeier Hansson will start third, followed by DragonSpeed’s No. 31 ORECA 07-Gibson.  Signatech Alpine Matmut’s No. 36 Alpine A470-Gibson will start fifth.

GTE-Am will have TF Sport’s Aston Martin for Charlie Eastwood and Salih Yoluc starting on the class pole with an average lap speed of 115.148 mph.  The average time was one-tenth of a second faster than Dempsey-Proton Racing’s Porsche for Matteo Cairoli and Gianluca Roda.  Cairoli was the fastest driver in GTE-Am during the session.  Team Project 1’s Porsche with Jörg Bergmeister and Egidio Perfetti will start third in class.

Only one car of the 34 entered failed to turn in a time.  That was the MR Racing Ferrari 488 GTE.  On his first lap of qualifying, Motoaki Ishikawa lost control in the fast and difficult Radillion and spun into the tires.  The crash damaged the Ferrari, but Ishikawa was able to drive the car the more than three miles back to the pits.  The car would not return to the track.  As a result, the No. 70 Ferrari will have to start from the rear of the field.

Friday’s qualifying session was held in the dry.  The race on Saturday will not be.  In fact, not only is it forecast to rain, but the overnight hours prior to the race will see a mix of rain and snow at the track.  The 1:30 p.m. local time start will have rainy conditions with temperatures in the low 40s.  Coverage from Spa will begin at 7 a.m. ET on Motor Trend with the green flag scheduled to fly at 7:30.  The first and last hour of the race will air live on Motor Trend, while hours two through six will be on Motor Trend On Demand.