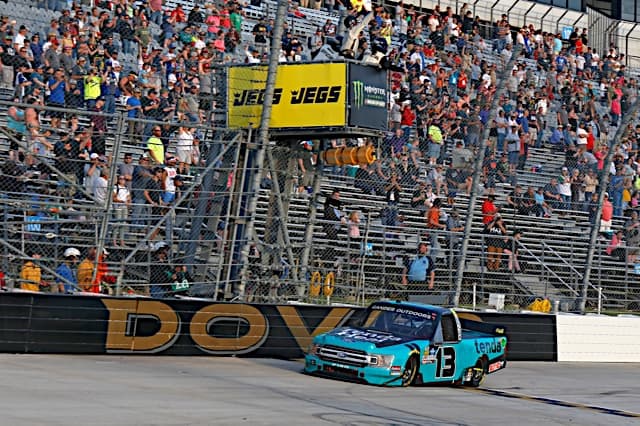 In a Nutshell: Johnny Sauter scored his third consecutive win at Dover International Speedway Friday afternoon (May 3) as he edged polesitter Brett Moffitt by just over a half-second. The driver of the No. 13 Ford recovered from lost track position when he tried to save fuel early in stage three and couldn’t get the truck to refire immediately. Rookie Harrison Burton ended up third, followed by ThorSport Racing teammates Grant Enfinger and Matt Crafton.

It was Sauter’s first win since reuniting with Thorsport after GMS Racing dumped him last offseason in favor of reigning Gander Outdoors Truck Series champion Moffitt.

“When you get kicked to the curb, you feel like you have a lot to prove,” Sauter said in Victory Lane. “I have to thank (owners) Duke and Rhonda Thorson, most importantly — a couple months ago I didn’t know if I’d be racing.

“To get three in a row here is extra special. I have to thank these guys. I was highly motivated. I shut the motor off earlier today in the race and it wouldn’t re-fire and I was like, ‘Oh well.’ Track position was so important, but experience paid off.

“It’s so special. This ranks up there as one of the biggest wins of my career. We’ve got to keep it going—that’s the main goal here, not to get complacent. I knew after Atlanta (where Sauter finished second on Feb. 23) we’d have a shot to win races. I felt like we gave one away at Martinsville but got it today.”

How bout a gold one for the collection, @JohnnySauter? ?

Hear from the man himself after his third straight win at the @MonsterMile! ? pic.twitter.com/to6nZgSeXw

Who Should Have Won: Sauter, Moffitt and Sheldon Creed combined to lead all but 17 of the 200 laps run, and any of the three could have easily found their way to victory lane. But when the checkered flag flew, it was Sauter who emerged victorious by beating the driver who replaced him at GMS Racing late during the offseason. Meanwhile, Moffitt led a race-high 81 laps but blamed lapped cars for costing him the lead and the win.

“It’s all about track position, really,” Moffitt said. “When we were out front, we could lead and won the first stage, but it was just a lot of traffic cost us track position that we never got back.”

Rookie driver Creed almost saw his race at Dover end before it really got going when an early wiggle from a loose truck nearly sent him spinning. But instead, an incredible save allowed the driver of the No. 2 Chevrolet to continue on.

Creed later took advantage of a quick pit stop under the caution following stage two and snagged the top spot for 59 laps before relinquishing it on pit road with just over 40 laps remaining. Despite losing the lead, he still remained inside the top five and within striking distance of his first career win until a restart on lap 160.

He got loose on a restart where the entire field was expected to be aggressive as the laps wound down. Snapping around, the No. 2 went spinning right in front of the field. Somehow, the only other drivers involved were Tyler Ankrum, who barely clipped Creed’s back end, and Todd Gilliland, who took the brunt of the hit and was slammed into the inside wall.

The Monster strikes! @sheldoncreed spins coming off of turn two and collects @ToddGilliland_ in the process. #JEGS200 pic.twitter.com/rTxzYwb1BC

The damage proved terminal and Creed was forced to retire with a disappointing 27th-place result.

Tough ending to an awesome day, thankful for everyone in my corner, well keep working hard to get those wins!

After qualifying fifth, Crafton was forced to drop to the rear of the field before the start of the JEGS 200 due to an engine change. But once the green flag flew, he made quick work of the field and was 10th by the time stage one ended.

Fast forward to stage two and suddenly, the No. 88 Ford suffered a bit of a power loss and Crafton dropped through the field. Under the caution at the end of the second stage, the team raised the hood and found a plug wire that had come disconnected.

The No. 88 team found a plug wire loose on @Matt_Crafton's machine following the conclusion of Stage 2. pic.twitter.com/uAQlY8tlux

As it turned out, that was the issue with the loss of power Crafton had experienced and he once again raced his way from the back of the field up into the top 10. By the time the checkered flag flew, he was fifth in what was his fourth straight top-10 finish.

Well.. P22 ain’t too bad when your weekend starts like this. ? Thank you @youngsmtrsports for all your hard work & never giving up. We’ll go get em in Kansas next week. Thanks for being on board @DlxMattress! pic.twitter.com/pILBmrWP3s

Extremely proud of the effort on the 33 truck. We had to work through a ton of issues the last two days. Ryan recorded the teams best finish on a non restrictor plate track with a P16. A big thank you to our sponsors for supporting us. Gonna get after it again tomorrow ? pic.twitter.com/EoTUslkxhe

2019 Rookie of the Year Candidates

Friday was yet another solid day for @HBurtonRacing.

Up Next: The Gander Outdoors Truck Series now heads to Kansas Speedway next Friday night. Coverage for the Digital Ally 250 begins at 8:30 p.m. ET on Fox Sports 1; the race can also be heard on your local MRN affiliate or SiriusXM NASCAR Channel 90.