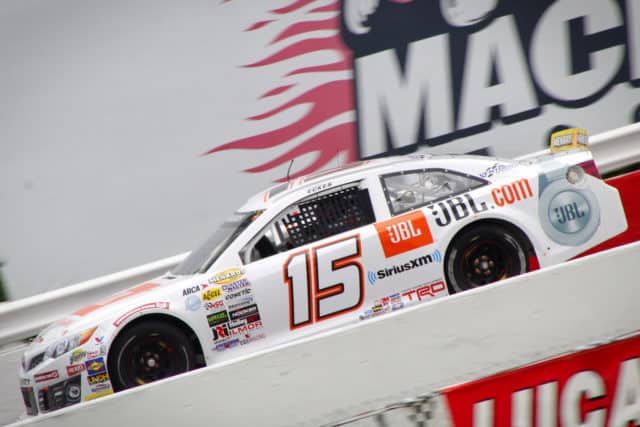 As has been the case with so many ARCA short track races dating back to last season, Chandler Smith rocketed away from the field at the drop of the green flag, keeping Eckes at bay until the first yellow of the day at lap 45 when Mike Basham cut down a tire.  Smith would briefly yield the lead to Corey Heim, who stayed out while the rest of the leaders pit for tires. Retaking the lead quickly after the restart on lap 53, the No. 20 would stay out front until lap 72, when the incident of the day saw points leader Michael Self involved in a wreck with Tommy Vigh Jr. (more on that later).

Eckes would take the lead on the ensuing restart on lap 80 and never look back. Though the field would close back up after a debris caution on lap 122, Eckes was again never seriously challenged for the race lead, scoring his fourth career ARCA Series win and the first for Venturini Motorsports at the Fairgrounds:

Self’s troubles, coupled with Eckes’ win, closed the points gap between the two title favorites to only 120 markers. Despite struggling all afternoon with a tight race car and finishing off the lead lap, Travis Braden finished ninth and retook the ARCA Racing Series points lead, 30 points ahead of Self as the series head to Toledo next week.

Venturini Motorsports has now gone three-for-three on short tracks in 2019, combining to lead all but a handful of the laps run on Sunday between Eckes and Chandler Smith. For Eckes, the win was overdue for a driver that won three races in a part-time ARCA tour a year ago, and coupled with Self’s troubles put him squarely back in the title race. And as for Chandler Smith, who scored his 11th consecutive top-10 finish in 11 career ARCA starts, he proved impassible at the front for the first 80 laps before fading in the final run to the checkers. Early race speed has been there in bounds for the Venturinis’ young prospect… the next step to take is to keep that speed up over 200 laps.

Hocevar scored his second consecutive top-five finish with a fourth place run at Nashville that saw him continually mixing it up with Chandler Smith, at times upsetting arguably the most potent short tracker in the ARCA ranks:

Chandler is told to not let that happen and to run him up the hill.

To be the best, gotta beat the best. Hocevar was close this weekend.

Holmes rebounded to score a top-five finish at Nashville despite suffering left front damage trying to avoid the wrecked car of Self in turn two. Even with that, Holmes finished fifth, equaling his career-best finish in four starts at the Fairgrounds. The finish also moved Holmes up to third in the point standings.

Joe Graf Jr. finished sixth in a quiet, non-eventful race for the No. 77 team. Considering Graf’s controversial history in ARCA competition (see Berlin last year, even Talladega last week) and his unfortunate ARCA debut at the same Fairgrounds Speedway a year ago, sixth with a clean car is a weekend worth celebrating.

Sunday was a mixed bag for both Gibbs and Braden. On the one hand, Gibbs scored a career-best ARCA finish and had the No. 18 running far better at the Fairgrounds than Riley Herbst did in either of the past two seasons at this track, while Braden scored his fourth top-10 finish in the first five races of 2019 and retook the points lead from Self.

On the other hand, Gibbs was directly involved in the lap 72 incident that took out the points leader Self. Though MAVTV was unable to provide any video replays of the incident (more on that later), interviews with both Self and the No. 25 crew after the incident, as well as Gibbs post-race, indicated that Gibbs hit the lapped car of Vigh, sending Vigh’s car into Self. While Gibbs’ was correct in his post-race observations that lapped cars need to hold their lines (as do jockeys), this incident came off as a repeat of John Wes Townley’s 2016 spin of Eric Caudell in the 2016 edition of this race; a fast car getting way too impatient.

As for Braden, while a ninth place finish and the points lead was a solid result leaving Nashville, finishing ninth in a depleted field that had less than 15 cars running at the finish does not speak well as to the No. 27’s team ability to contend for the ARCA crown in 2019. It’s a good start of the season story, but doesn’t seem likely to have legs.

Regardless of the story that led to it, Self’s day ended with a heavily damaged lap car 128 laps short of the finish.

Two wins have Self still within striking distance of the points lead, but two DNFs have kept the points race closer than expected five races into the season.

The other driver to take heavy damage in the lap 72 crash was that of Vigh Jr., who for the second week in a row, leaves the racetrack with a smashed up racecar. The No. 10 team is likely thankful that there’s a two-week break before Toledo.

Last year in this race Chad Bryant Racing saw Josh Berry score a top-five finish in the team’s No. 22 car, while Graf Jr. had a (self-inflicted?) transmission issue derail a top-10 finish for the No. 77. This year Heim, driving the No. 22 had the bad luck for CBR, as a sure-fire top-10 finish went up in smoke inside of 20 laps to go when he was forced down pit road for an undetermined issue; the MAVTV booth said the stop was to have the crew secure seat belts that came loose under green, but the CBR Twitter handle said otherwise:

Regardless of the cause, Heim finished seven laps down in 11th.

I do want to give some credit where it’s due to MAVTV. For one, unlike several rain outs in 2018, MAVTV broadcast the rescheduled race this Sunday live, giving those of us unwilling to spend hours watching Dover’s jet driers at work something to do. The pit crew for MAVTV also broke new ground around lap 38, going deep into the field to update viewers on Caudell’s pit crew and brake issues they discovered in practice.

That said, the telecast from the track failed to provide any video of a lap 72 caution that involved four cars in a 20-car field, an incident that literally took the points leader out of the race. On a half-mile track with only 16 cars running on it at the time of the incident, there is no excuse for missing the wreck. It’s a complete, abject failure. And it’s not the first time MAVTV’s crews have missed such a major incident; rewind back to the fall race at Salem last year, where the camera crews failed to capture Self being taken out by Zane Smith in a retaliatory wreck.

Beyond that incident, Lexi Gay’s ARCA debut with Empire Racing lasted only a handful of laps, ending so quickly that several start-and-parkers at the back of the field actually finished ahead of Gay’s No. 44 car. Viewers received no notice of anything happening to Gay until well over 100 laps into the race, with a taped interview on lap 155 revealing that Gay experienced “spotter trouble” that ended their race early (MAVTV did report that Gay made contact with the wall).

Again, no video, no highlights, nothing. In racing, the ugliest incidents are the ones that go unseen.

There’s been a grassroots movement afoot to bring big league NASCAR racing back to the Fairgrounds Speedway. The reality is, it’s a true long shot for the Fairgrounds to make a case for said racing. As it stands, it’s a true fairgrounds track, with a large grandstand lacking any major amenities for fans and media alike. Parking is limited, and with an MLS soccer stadium in the near-term future for the fairgrounds site in Nashville, the literal physical space for renovation and expansion is even moreso.

Not helping the situation is that the Fairgrounds Speedway fell victim to less than hospitable weather for the second year in a row. Last year’s race was run with intermittent flurries falling and temperatures in the 20s. This year, persistent rain limited on-track activity to 30 minutes of practice Saturday, with the race being run a day late. Unfortunately, the grandstand crowds the last two seasons have looked like events besieged by a Westeros-caliber winter and a rain delay, which led to one of the more incendiary tweets of Sunday:

I swear there isn't 200 people in the stands for @ARCA_Racing at Nashville. Fat chance of seeing #NASCAR there

Let’s be fair, Utter’s estimate is sarcastically low, and a rain delay will diminish the crowd for any race outside of the Daytona 500. What’s more, ARCA has continually proven to be a hard sale in the south. The former USA International Raceway, Lanier, Gresham Motorsports Park, all these tracks lasted only one year with an ARCA event. But, at the same time, the time for tracks to make their case for 2021 NASCAR events is now, and the last two ARCA races have been anything but stellar examples of why an existing venue should lose a date to make room for the Fairgrounds.

The last two ARCA races have seen thin fields full of teenagers lacking much in the way of major local flavor, and many Fairgrounds supporters will point to the larger crowds the venue draws for major later model races, including the All-American 400, as proof positive that NASCAR should make a comeback. But let’s be real, the Truck Series and even the Xfinity Series in this day and age are seeing thinner fields full of teens and young adults. That’s racing outside of Cup in this day and age. And regardless of where one falls on the Fairgrounds, Cup racing in 2021 is far-fetched. If the Fairgrounds can’t sell ARCA, the question remains whether a lot will change by bringing NASCAR’s minors to the Music City.

….on the other hand, the super late model race, co sanctioned by CRA, CARS & SSS started 34 racers and was quite a good show. All three sanctioning bodies saw their stars finish in the top five, with PASS’s Matt Craig also finishing with a top five too! Just to show you how hard core the fan base is for the SLM’s, nobody in the grandstands left after that extremely dull ARCA race. Moreover, the lack of ARCA entries had to be embarrassing for that sanctioning body. Great day however in Nashville, now I’m home in Maryland

I spent Saturday waiting out the rain in Nashville. Gave up and went home. It’s not a terribly bad drive to Nashville from my neck of Dixie. But, by the time church let out, etc. I’d never have made it to the racetrack in time.

The field seemed a little empty but I thought the race and coverage were good enough to interest. Hopefully the weather will not be an issue for the All-American 400 (which was postponed by rain again; scheduled for November).

Matt, The ARCA photo guys caught each of the incidents you mentioned. Send an email with an address to send them to and we’ll make sure you get them after each race… RC