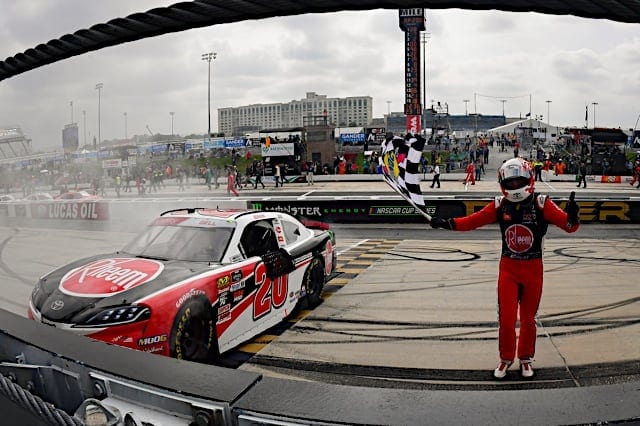 The Gander RV 400 at Dover International Speedway has been postponed until Monday (May 6) at noon ET.

Inclement weather rolled into Dover early Sunday morning, causing a heavy downpour throughout the early afternoon. Cars were able to get on track for the pace laps but a heavy mist turned into rain. NASCAR quickly called the drivers down pit road and covered them up.

When the green flag flies, Chase Elliott will start from the pole. On Sunday morning, NASCAR announced Martin Truex. Jr., Alex Bowman and Ryan Preece failed pre-race inspection twice, meaning a crew member from each team was ejected from the premises and will serve a 15-minute practice penalty at Kansas Speedway next week. All three drivers will start at the rear of the field. – Dustin Albino

The beginning of the 2019 Xfinity Series season belongs to Christopher Bell and the No  20 team, who picked up its third win of the campaign on Saturday at Dover.

But Bell had to work for this one. Cole Custer won the pole and swept the opening two stages, leading the first 156 laps. When Kaz Grala spun out with just over 40 laps to go, the No. 20 edged the No. 00 car off pit lane to take the lead.

Despite a rash of late-race cautions, Bell was able to hold on to the lead, ahead of Justin Allgaier, Tyler Reddick, Custer and Chase Briscoe.

The win is Bell’s second straight at Dover and 10th in the past 43 races for the No. 20 team. Meanwhile, the series has two consecutive off weeks before returning to Charlotte Motor Speedway on Memorial Day weekend.

Both Brandon Brown and Timmy Hill has respectable finishes for their small teams. Brown tied a career-best finish of 13th, while Hill tied MBM Motorsports’ best finish on a non-superspeedway or road course event. – Dustin Albino

For the third straight Truck Series race at Dover, Johnny Sauter headed to victory lane, though this time he led just 43 laps. Brett Moffitt started on the pole and led 80 of the first 81 laps before losing the lead in a battle with lapped traffic. He ended up unable to regain the top spot for more than a single lap later in the race and took the checkered flag second. Rookie Harrison Burton, who showed a substantial amount of promise racing with the leaders, ended up third followed by ThorSport Racing teammates Grant Enfinger and Matt Crafton.

Meanwhile, rookie Sheldon Creed spent 59 laps in stage three out in front of the field. He ultimately lost that lead on pit road and later became the victim of a late race spin on a restart and walked away with a disappointing 27th-place finish and a wrecked No. 2 Chevrolet to show for his race.

The JEGS 200 proved to be exactly what people expected where the series regulars were able to really steal the spotlight and show what they’ve got this season.

We saw the veteran in Sauter who took the win by steadily working his way through the field after losing track position while shutting off his engine under caution. There was another veteran in Crafton who managed to race his way from the back of the field… twice. A few rookies even managed to show their strength and what this season might bring as it rolls on.

The best news? The Truck Series heads to Kansas Speedway next Friday night for another race under the lights at the mile-and-a-half oval. It will be the second in a string of three straight race weekends for the series. – Beth Lunkenheimer

It’s been raining on Christian Eckes‘ parade as of late. But on Sunday, things turned up rosy. Eckes took the lead on the second to the final restart and kept it en route to his fourth career victory and first of 2019.

Eckes missed Salem after food poisoning forced him to the hospital and out of the car. Missing that race already hurt his chances at winning the ARCA Menards Series championship. At Talladega, his championship hopes took an even bigger hit after being involved in an accident coming to pit road.

Despite Ecke’s hopes being distant, he went out Sunday and showed them how much of a contender he still is. The fact that Michael Self was taken out, cracks the championship battle wide open. Self was vocal about the whole ordeal, giving hand gestures in Turn 2, where his car sat. Those gestures were pointed toward the second-place finisher, Ty Gibbs. Gibbs stated after the race that it was just an “accident and that there were a ton of cars out there who were way slower that would come down in front of you.”

Gibbs finished second for the second time this season.

Chandler Smith, the pole sitter, was setting out to dominate yet another race. But late in the going that just wasn’t the case as he fell back and wasn’t able to get back to the front. He was left to settle for a third-place finish. Carson Hocevar finished the race in fourth while Bret Holmes rounded out the top five.

The ARCA Menards Series now heads to its home track in Toledo, Ohio on May 19. Before that, the series will test at the Charlotte Motor Speedway in advance of the race there May 23. – Christian Koelle

Sports Cars: Just What Exactly is the WEC’s Future?

In the WEC’s LMP1 class, Toyota GAZOO Racing’s TS050-Hybrids have effectively been running a benefit for themselves for the last year ever since Audi and Porsche pulled out.  The non-hybrid LMP1s, while quick, just can’t run with the Toyotas in a race despite a series of rule changes to make them quicker.

In addition, there is the specter of 2020 regulations for the top class (currently LMP1).  One entire ruleset has already been adopted and thrown out due to the excessive cost.  More recently, a hypercar idea has been floated, but the rules haven’t even been agreed to yet and the first race for those rules is 15 months away at Silverstone.  It is unclear whether this new setup will be adopted at all.

Where does the WEC go from here?  They could try to salvage the Hypercar concept, but they’ll have to hurry.  Or, they could go another route.  RACER.com’s Marshall Pruett wrote Saturday about the possibility of IMSA’s DPi 2.0 regulations (which are currently in the discussion phase and not due to race until 2022) being the basis for the WEC’s new top class.  That would be interesting if it happened (and much cheaper than the present), but where would it leave to WEC beyond Le Mans next year?  Would they just run the non-hybrid LMP1s as the top class until then?  Who knows.

What we do know is that the current LMP1 class is not very competitive.  Saturday’s snow-filled 6 Hours of Spa-Francorchamps is just the latest example of no one giving Toyota a fight.  Having this scenario for the next three full seasons after this one is more or less untenable for the FIA. – Phil Allaway