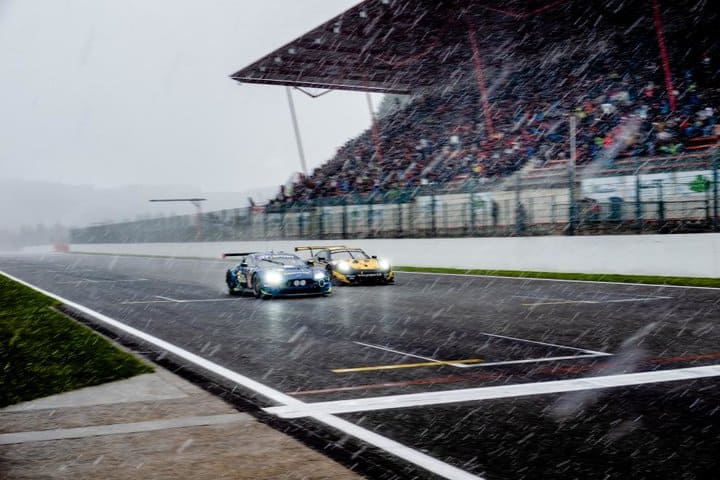 Toyota GAZOO Racing’s No. 8 Toyota TS050-Hybrid for Fernando Alonso, Sebastien Buemi and Kazuki Nakajima claimed overall victory Saturday (May 4) in the 6 Hours of Spa-Francorchamps.  However, the picture above shows the real story.  The race was plagued by unusually cold weather for early May and was put under the safety car multiple times due to heavy rains, hail and snow.  The race was eventually called 11 minutes short of the scheduled conclusion due to snow showers.

After a sunny Friday, it had actually snowed the night before the race.  Teams were greeted to accumulation on the grounds and a wet track upon arrival on race day.

This is unbelievable! TOTAL 6 Hours of Spa-Francorchamps is declared snowy. Do you have winter tyres for our beasts @Michelin_Sport? ?❄?#WEC #6HSPA @Toyota_Hybrid @DHL_Motorsports @TotalRacingENG pic.twitter.com/fYlxoKll3c

Later, the sun came back out, drying everything up and allowing for a couple of hours of racing in the dry.  Just after halfway, the rain returned briefly and soaked the track, forcing another change to wets.  This shower didn’t last very long and a dry line quickly formed.  Most teams ended up switching back to slicks, but a couple managed to stay out on their wets on the drying track.

Then, a cloudburst came over the circuit, dousing it with hail.  This resulted in the third safety car period of the race.

We have had snow, rain, sun and now comes the hail! Safety car is deployed. ?❄??#WEC #6HSPA pic.twitter.com/mP3Pgcc3TJ

The hail didn’t last all that long, but the track was completely wet again.  After a short period behind the Porsche safety car, the race resumed with breaks of blue sky and ominous clouds on the way.  There was appromixately 30 minutes of green-flag running before heavy rains (without hail) descended on the track, making the venue unraceable and bringing out yet another safety car period.

The plan was to run the final 15 minutes to the finish, but a couple of laps after the restart, the snow returned.  Race director Eduardo Freitas made the quick decision to put out the red flag at that point.  Under FIA rules, a red flag beyond 75% of the posted race distance means the race is over and full points are awarded.  The final results are calculated based on a two-lap count back.  Of course, as soon as all the cars were back in the paddock, the snow stopped and the sun came out.

With the various safety car interventions and full course yellows, the winners covered 30 fewer laps than in this race last year.  Despite all the adverse weather, there weren’t all that many incidents.  Only one of the safety car periods was caused by an incident.  While there were some spins, there were no big crashes during the race and no injuries.

Ultimately, the LMP1 race was decided in the third hour when the pole-winning No. 7 Toyota was forced to go to the garage due to a hybrid issue.  The team lost four laps getting repairs.  That gave the No. 8 team a lead that they were not going to give up.

The winning margin was one lap for the No. 8 Toyota over the REBELLION Racing No. 3 Rebellion R13-Gibson for Gustavo Menezes, Thomas Laurent and Nathanael Berthon,  SMP Racing’s No. 11 for Mikhail Aleshin, Vitaly Petrov and Stoffel Vandoorne was third.  The No. 7 Toyota ended up sixth in class.

In LMP2, the multitude of safety car periods ultimately played havoc with the race.  Early on, it was the pole-sitting G-Drive Racing ORECA 07-Gibson that was in control, but pit strategy put the Signatech Alpine Matmut team at the point.

DragonSpeed’s No. 31 for Pastor Maldonado, Roberto Gonzalez and Anthony Davidson took the lead during the final safety car period.  Maldonado was able to hold on until the race was stopped to take the class win.

With the two-lap count back, DragonSpeed won by 3.955 seconds over the part-time G-Drive Racing No. 26 for Jean-Eric Vergne, Job van Uitert and Roman Rusinov.  Signatech Alpine Matmut’s Nicolas Lapierre, Andre Negrao and Pierre Thiriet were third.

GTE-Pro was won by Aston Martin Racing’s Alex Lynn and Maxime Martin, their first victory of the season and second for the current generation Aston Martin Vantage.  Lynn and Martin were able to keep themselves in the hunt and took the lead for good with just over 70 minutes remaining.

The margin of victory was less than a second over AF Corse’s Alessandro Pier Guidi and James Calado, who had suffered with a lack of straight-line speed for much of the weekend.  Wintry weather more or less negates that.  Porsche GT Team’s Michael Christensen and Kevin Estre finished third.

GTE-Am was won by Dempsey-Proton Racing’s No. 77 Porsche for Christian Ried, Matt Campbell and Riccardo Pera.  The trio took the class lead with 70 minutes remaining and managed to hold on for their fifth win of the season and third overall.  They would be the runaway point leaders had they not had all their points stripped after being disqualified at Fuji in October.

The margin of victory was 5.344 seconds over the TF Sport Aston Martin (pictured above) shared by Salih Yoluc, Charlie Eastwood and Euan Hankey.  The Clearwater Racing Ferrari for Luis Perez Companc, Matt Griffin and Matteo Cressoni was third.

There is only one more WEC race remaining in the season.  That is the biggest one of all, the 24 Hours of Le Mans on June 15.

Gotta love the challenges that teams face in this form of racing, and Congratulations to Aston-Martin on their victory. Love the looks of the latest Vantage.