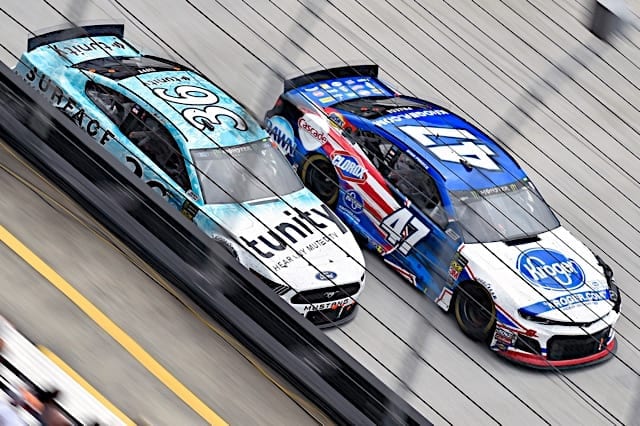 For two Rookie of the Year Contenders in the Monster Energy NASCAR Cup Series, last week’s race at Talladega Superspeedway was a long-awaited bright spot.  Both Ryan Preece and Daniel Hemric walked away with top-five finishes.

Preece’s third-place result is a career-best finish, improving on his eighth place earlier this year in the Daytona 500.  Hemric started and finished in fifth place, earning the first top five of his Cup Series career.

Unfortunately, fellow rookie Matt Tifft did not have much of an opportunity to race for a good finish of his own.  Just 11 laps into the race, several drivers crashed in turn 1 and slid up the track directly in Tifft’s path.  While he managed to avoid running into anyone, a large piece of debris got stuck in the nose of the No. 36 Ford.  Tifft’s team failed to repair the car within the constraints of NASCAR’s damaged vehicle policy, leading to their exit from the race.

Tifft’s misfortunes at Talladega are more typical of what all three rookies have experienced in 2019.  While Preece has been successful on superspeedways, he has no other finishes inside the top 15 through 10 races.  Hemric’s only other strong run besides Talladega was at Atlanta Motor Speedway, where a flat tire cost him a shot at a top-10 result.  Tifft came into the Cup Series with lower expectations and less fanfare than Preece or Hemric, but he has still struggled mightily with no finish better than 20th.

If there is good news for Preece, Hemric and Tifft, it is that they are not alone.  Most of the rookies who have entered the Cup Series over the last six years have endured plenty of growing pains.  The early-2000s may have been filled with newcomers who made a splash right away by winning races and contending for championships.  However, those days are long gone, even if they are burned into the memories of a lot of fans.

The performance of the 2019 rookie class may pale in comparison to the “Young Guns” of yore, but this class is still in step with its more recent predecessors.  For the last six seasons, being a Cup Series rookie has been a hard slog for almost everyone.  Like Preece, Hemric, and Tifft, it has been rare for recent rookies to find any meaningful success in the first 10 races of their rookie seasons.  Often times, the remainder of the season doesn’t get much better, assuming drivers can even hold their seats through the end of the year.

The following table shows just how difficult it is to be a Cup Series rookie.  The table includes all Rookie of the Year eligible drivers going back to 2013, who made at least 20 starts in their designated rookie season.  Each driver has two sets of data.  The first set records performance in the first 10 races of each driver’s rookie year.  The second set covers all remaining races a driver competed in the rest of the year.

This most striking thing about the data are the large number of zeros, especially for wins.  Chris Buescher was the only rookie to reach victory lane during his first year.  That particular victory came on a rainy and foggy Monday at Pocono Raceway in an event that got cut short 22 laps from the finish.  No disrespect is meant to Buescher or Front Row Motorsports, who employed some excellent strategy to secure the win.  But Buescher did not regularly contend for victories as a rookie, and other than the possible exception of Chase Elliott, neither did anyone else.

Another important factor is the huge disparity in equipment that rookies had at their disposal.  It is no surprise that Elliott, Kyle Larson, Erik Jones and Daniel Suarez posted double-digit top 10s in their rookie seasons considering for whom they raced.  Elliott and Larson have since gone on to become multi-race winners.  Jones and Suarez are still works in progress.  However, Jones does have a win and Suarez is off to a good start at Stewart-Haas Racing.

Most of the other drivers listed here struggled with lesser equipment.  Drivers like Ryan Blaney, Alex Bowman and Matt DiBenedetto found their way to better teams and have been able to establish themselves in the Cup Series (though Blaney’s future was less in doubt than the other two).  Ricky Stenhouse Jr. and Austin Dillon have found modest success racing with their longtime teams.  Others have become more frequent competitors in the Xfinity or Gander Outdoors Truck series.

Some have left NASCAR completely, and for a few others, it is still too early to tell what paths their careers might take.

One common theme for most drivers is that the first 10 races of a rookie season are not dramatically different from the remaining races.  The first quarter or third of a rookie’s season has been a fairly accurate picture of how he or she will perform over the course of a season.  Jones, Suarez and Buescher did the best job of finishing their respective rookie years on a high note.  However, real improvement took time for most drivers.

The bad news for Preece, Hemric and Tifft is that their rookie struggles are likely to continue.  Tifft, in particular, will probably wind up with a rookie season similar to those of Brian Scott and Brett Moffitt with just one or two top 10s.  However, Tifft has proven to be good at finding sponsors in an era where lack of funding has derailed a lot of drivers.  Hopefully, he will get another shot in 2020.

Preece has a higher ceiling, though expectations should remain tempered for him as well.  Preece’s first 10 races bear the most resemblance to the beginning of Bubba Wallace’s rookie season last year.  Wallace wound up running worse at the end of last year than he did at the beginning, a trend that Preece can hopefully avoid.  Perhaps having Buescher as a teammate could be an asset as Preece continues his transition from modifieds to stock cars.

As for Hemric, maybe his strong finish at Talladega can be a springboard for future success.  That finish made him one of only five drivers listed that earned a top-five finish in the first 10 races of their rookie season.  Superspeedway racing is a different animal than what drivers usually face in the Cup Series, but that’s okay if it provides the No. 8 team with some positive momentum.  Hemric will probably have more races go wrong than right this year.  Yet as history suggests, that’s par for the course for a Cup Series rookie.