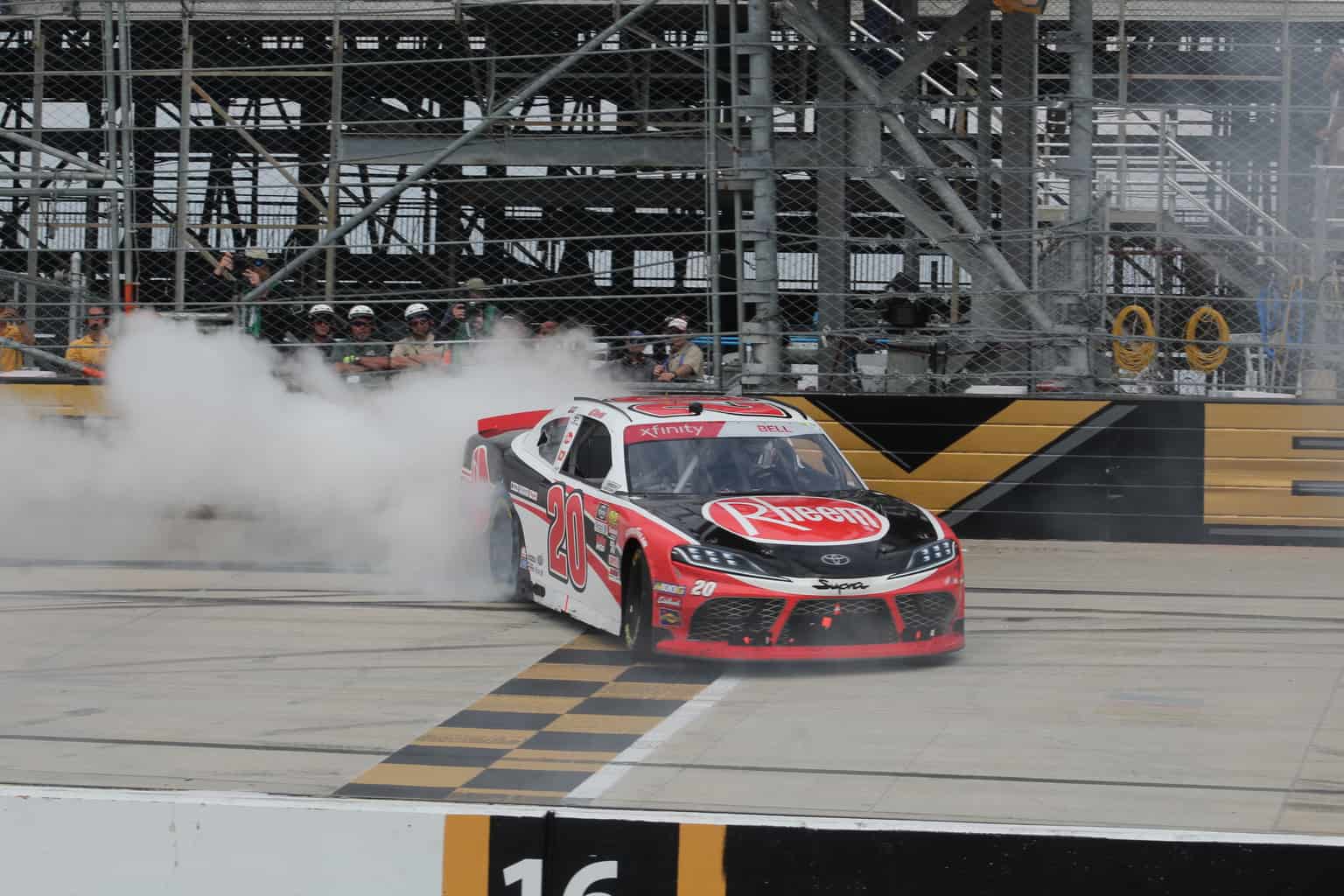 It’s pretty common to refer to the final yellow flag pit stop of a NASCAR race as the “money stop.” On Saturday at Dover International Speedway, it earned that name in very literal fashion for Christopher Bell and his No. 20 Toyota team en route to a victory in the Allied Steel Buildings 200.

Dover probably isn’t the first track that comes to mind when thinking of tracks where being up front in clean air is everything. But it raced that way for the final Dash 4 Cash race of 2019, as Cole Custer got out front from the drop of the green flag and looked as if he might stay there the entire afternoon.

He nearly did, because it simply wasn’t possible to run him down and pass him on the surface at the Monster Mile. Bell tried his best, as did Justin Allgaier and Tyler Reddick. Occasionally, it felt like they were closing the gap, but Custer would simply extend his lead by a few more car lengths a few laps later, and he sliced through lapped traffic better than anyone.

That Custer led 155 laps but didn’t walk away with the victory was almost entirely because of Bell’s pit crew. They came up big on what turned out to be a true money stop, since it put Bell in front to stay for not just a race win, but the $100,000 Dash 4 Cash bonus. The driver also deserves credit for staying patient and acing all of his restarts — including after the final pit stop — but he gave credit where it was due after celebrating with both a trophy and an oversized check.

“This one is really out to my pit crew,” Bell said after the race. “They did a great job of getting me out first there where I could control the restarts. I knew if we could get out front, we were going to be tough to beat.”

Make that impossible to beat. You have to feel for Custer, though he’s already won twice this season and seems likely to grab at least one or two more before Homestead. on Saturday, Bell’s team was simply better when it mattered most.

Let’s not mince words here: This wasn’t the most exciting Xfinity Series race ever, or even this weekend. That’s what happens when you can’t pass for the lead.

But I’m obligated to say some nice things in this section, so I will say that Custer was awfully impressive, and reminded us all that we shouldn’t overlook him when considering the championship battle later this year. He seems to have more confidence and more speed than last year.

Most of the race flew by as there were no cautions for incidents in the first two stages, and almost everyone made it to the end without tearing up their equipment. In fact, if you took one driver out of the field, who we’ll get to shortly, this might have been the cleanest race so far. That’s good for the teams if nothing else.

It was definitely a feel-good story when Gray Gaulding raced his way to a second-place finish at Talladega. It not only reinforced the stereotype of superspeedway races as the great equalizers, it gave Gaulding the most unlikely of shots at the Dash 4 Cash bonus at Dover.

On Saturday, Gaulding was reacquainted with reality in the most depressing possible way. He ended up getting lapped early (though he was hardly alone there), and ended up three laps down by the time the race ended. Underdog stories don’t really have a chance to add more chapters when it comes to the Dash 4 Cash.

Depending on your point of view, the number of lapped cards and the speed at which the leaders ran up on them was also bad, threatening to ruin races for position within the top 10 on several occasions. Then again, without lapped cars, Custer would have had almost nothing to do for 150-plus laps, so you could argue they were needed in this case.

I’m not saying that John Hunter Nemechek has a reputation for causing more than his share of on-track incidents, but never forget that he played a starring role in this finish a few years ago.

I bring this up not just because any reason to dust off that video is a good one, but because on a day when there were very few multi-car accidents, Nemechek was involved with two of them. First, he got into Kaz Grala. Then this happened after Bell had already taken the checkered flag.

Zane Smith crashes across the line after battling with John Hunter Nemechek at Dover. pic.twitter.com/t77IZbugHV

On one hand, Nemechek and Zane Smith were battling for position. On the other, tearing up cars to finish eighth instead of ninth, and to knock around two drivers on part-time schedules is kind of uncool.

Saturday was not a great day for underdogs. We’ve already talked about how things went for Gaulding, and no one who ended up in the top 10 was from one of the lesser-funded teams.

Still, that doesn’t mean we can’t find some silver linings deeper in the field. Ryan Sieg fought his way back from trouble in the first stage and finished on the lead lap in 11th. Timmy Hill was among the three drivers to finish just a single lap down in 16th, his best finish of the 2019 season so far.

That’s about it. Big change from Talladega where the downtrodden rose up and represented.

Bell’s $100,000 bonus payday was his second of the year, which isn’t unusual. One driver has won two Dash 4 Cash bonuses from 2015 through 2019. He nearly had to win the race to do it, as Reddick finished third and Chase Briscoe came home fifth.

Dover marks the end of the program for this year as well, which means that Cup Series drivers can return to the fray in a couple weeks at Charlotte.

“When you’re having flats [tires] and motors blow up, that’s out of your control. We had to keep the morale up at the shop and keep the guys going, but I think it showed today and we’re going to get back to where we need to be.” – Brandon Jones

“It was a weird day… but typical of how we’ve run all year. We really struggled the whole race and then at the end, all of a sudden, we come alive and got up in the mix.” – Chase Briscoe

For the second straight day, the weather in Dover was crappy in the morning, only to have the sun come out right when the command to fire the engines was given. After the race, clouds immediately began gathering again, as if the stock car racing gods willed the Monster Mile to have just enough pleasant hours to put on a race.

If that was the case, the NASCAR deities are cruel indeed, because the Allied Steel Buildings 200 was painful to watch for big chunks of time. It’s disheartening because the racing at Dover really should be good, what with the high speeds and big banks, but it’s currently just too hard to pass, and the Xfinity Series cars seem to have it harder than the other two series at the moment. I’m not sure what the answer is.

I’m sorry to report that the Xfinity Series is off for several weeks. It won’t be back in action until May 25, when the Alsco 300 takes place at Charlotte Motor Speedway. Fun fact: It’s the second of three races this year to bear that name, with the final one coming at Kentucky in July.

If you’re guessing that it’s a race dominated in recent years by Cup Series drivers, you’d be right, as no Xfinity Series regular has won the event in this decade. Tune in to FOX Sports 1 at 1 p.m. on May 25 to see if this year will be different.