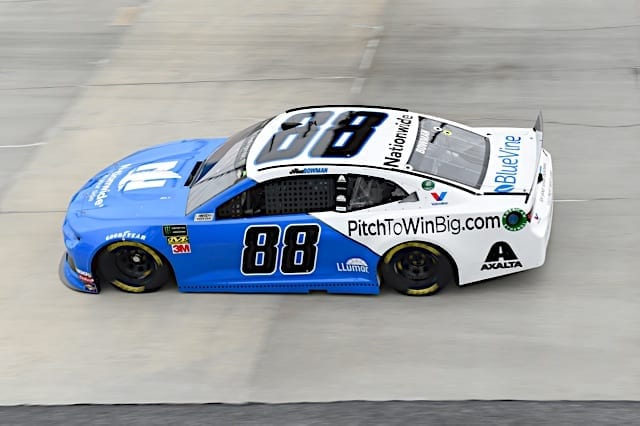 Prior to last Sunday’s (April 28) race at Talladega Superspeedway, Alex Bowman had yet to score a top-10 finish in 2019. Two races later, the No. 88 team has two such results – both of them second-place finishes in the Monster Energy NASCAR Cup Series.

Bowman’s weekend at Dover International Speedway started well, turning the fifth-quickest lap in qualifying on Friday (May 3). But prior to the Gander RV 400, the No. 88 Chevrolet was sent to the rear for failing pre-race inspection twice. It seemed a bad omen for a driver that had never finished a Dover Cup race inside the top 15.

But past history got put to bed on Monday (May 6). Once the race began, Bowman shot up the leaderboard, getting all the way up to seventh by the end of the first stage.

He wouldn’t stop there. With 17 laps remaining in stage two, Bowman passed Hendrick Motorsports teammate Chase Elliott for the lead. The No. 88 car would lead the way until Martin Truex Jr. got by on the final lap of the stage, taking the playoff point away from Bowman.

“The [No.] 43 kind of stayed on the bottom forever in front of us, and I moved up to try to go around him on the outside on the last lap and got super loose,” Bowman said of the stage two ending. “A little unfortunate, but at least we were second. It’s better than it could have been.”

Besides losing the lead during a cycle of green-flag pit stops, the final stage belonged to Truex. However, Bowman was in close pursuit until the No. 19 car gapped the No. 88 over the final 20 laps, winning the race by 9.5 seconds.

The No. 88 team was left to finish runner-up for the second consecutive week.

“I think [on] new tires we were probably a little bit better than him,” he said. “It was going to be whoever led on the restart. Clean air today was huge. This place is really tough to pass now that you’re going so fast that we just needed some clean air.”

The second-place finish is Bowman’s fifth top-five result of his career and his first above 20th at Dover. Coming through the field and leading 16 laps was a clear statement for the No. 88 team.

At ISM Raceway in November 2016, Bowman led 194 laps replacing Dale Earnhardt Jr. in the No. 88 car. But that effort came from the pole. On Monday, he was a force to be reckoned with despite starting in the rear of the field.

“It’s probably the best first half of the race [of my career], Bowman said. “We didn’t really do anything special toward the end of the race, and I would have liked to have executed on some things a little bit better. But the first half of our day was really solid and something I’m really proud of.”

Over the past two races, Hendrick Motorsports has put a total of four cars inside the top five. In the opening nine races of the season, the team had a total of four top-five finishes.

Bowman believes the team is heading in the right direction.

“We’re getting there,” he stated. “[Dover] has been a really good place for Hendrick Motorsports over the years. It’s a place where we can shine. There are some places where we need to do a lot of work but we’re heading in the right direction.”

The Monster Energy NASCAR Cup Series now heads to Kansas Speedway this upcoming weekend. It’s a track where Bowman has a best finish of seventh in seven career starts.

Not a Bowman fan at all but I was pulling for him when he looked like he might have a shot. I always like to see a first time winner.