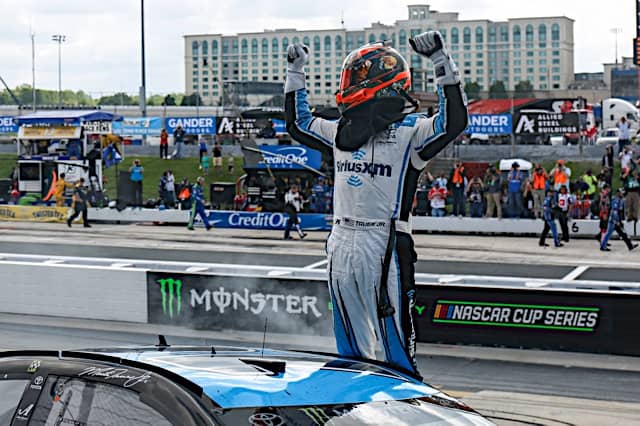 This wasn’t the greatest weekend for racing. The Kentucky Derby saw pre-race favorite Omaha Beach scratched several days before the big day, and then a steady curtain of rain muddied the track surface, indirectly playing into the outcome as Maximum Security dodged a puddle, which was ruled as interfering with his competition, handing the victory to the runner-up Country House at 65-to-1 odds.

The clouds parted just enough in Delaware to allow the Xfinity Series race to conclude on Saturday at Dover International Speedway, as Christopher Bell won a snoozer of a race on pit road after Cole Custer cruised to wins in both stages.

On Sunday, NASCAR officials waited around pretty much all day before deciding the track was too wet to run safely, pushing the Monster Energy NASCAR Cup Series AAA 400 to early Monday afternoon. It was not enthralling, and then the winner claimed the checkered flag by nine and a half seconds. That has to come close to beating Secretariat’s 31-length margin of victory, doesn’t it?

Martin Truex Jr picked up his second Cup Series win at Dover. The first came in 2007 at the last race at the track to be postponed by rain, when Truex was driving for Dale Earnhardt Inc. The newest Joe Gibbs Racing driver picked up his second win of the season, his fourth top five and his seventh top 10 in 11 races.

Also, his teammate Kyle Busch set a new record for most consecutive top 10s to start a season with 11 straight. That makes 13 in a row dating from the 2018 fall event at ISM Raceway. JGR now has seven wins total through the first 11 races of 2019.

Rick Ware Racing has two charters. That’s the highlight of their 2019 so far, as the No. 51 and No. 52 have each been Chevrolets or Fords depending on the week, and their driver combinations of Stanton Barrett, Jeb Burton, Bayley Currey, Gray Gaulding, BJ McLeod and Cody Ware have totaled a best result of 19th (McLeod at Daytona) through 11 races, with six official DNFs. Neither car has finished on the lead lap yet, and they are currently 34th (No. 51) and 38th (No. 52) in the owners standings out of 43 teams total.

Kevin Harvick hasn’t gotten into the win column, but he’s been lurking in the front, matching his car number with five fourth-place results so far this season. He has eight top 10s, and an average finish of 10.9.

Dover was not kind to veteran racers on Monday. Denny Hamlin went to the infield care center after the race, which he spent mired in the low 20s before finishing in 21st. Ryan Newman ran around 20th all day before crossing the line in 18th. Kurt Busch ran in the high teens most of the day before finishing 13th.

.@dennyhamlin was being attended to by medical staff on pit road once he exited his car. Looked exhausted.

He was seen on a golf cart being wheeled away for further treatment. #NASCAR pic.twitter.com/2pEIA6Ac1s

While Chase Elliott wasn’t able to make it two in a row, either at Dover or in the Cup Series this season, he dominated the first two stages before fading late into fifth. That gives the highest-performing Hendrick driver a win, three top 5s and four top 10s just shy of the one-third point of the  schedule.

Ricky Stenhouse Jr. finished outside the top 15 at Dover for the seventh time in 14 Cup Series races at the track, following a run-in with the wall caused by a flat tire, which meant a trip to the pits and being trapped several laps down. He wound up in 33rd in a 37-car field, 14 laps down.

The Roush Fenway Racing driver has only four top 15s so far in 2019, with a best finish of sixth at Las Vegas. He is currently 21st in the points standings.

Clint Bowyer‘s No. 14 Ford Mustang was in the black and red Mobil 1 colors this weekend for Stewart-Haas Racing, and it just looked mean. For a race car, that’s a good thing. And the flames are subtle, unlike some other designs often seen throughout the field.

An honorable mention goes to Kyle Busch, who was in Pedigree colors this weekend, and that bright yellow never looks bad, either. (Also, as an editor of the canine sports, entertainment and lifestyle site Dog O’Day, I’m partial to pup power no matter who’s driving.)

why is the Dover trophy diecast a promo 1:24 from the COT era#NASCAR #Dover #GanderRV400 pic.twitter.com/MfYjwf5txd

My Frontstretch colleague Adam Cheek spotted something a little off about the gold-coated Miles the Monster trophy.

I am glad we have @KyleBusch in @NASCAR He has so much talent he can get away with saying we he thinks. Kinda like @TonyStewart could do. We could use a couple more like that in our sport. https://t.co/SRvlbqi8mH

NASCAR legend Mark Martin is in favor of drivers speaking their minds.

P20 today. Had a better car than that but had to start at the tail once and couldn’t pass in dirty air so we just got stuck. Team made great changes to the car, pit crew had fast stops, we were really fast in clean air but the high downforce presented challenges

Matt DiBenedetto succinctly summed up the day of the No. 95 Leavine Family Racing Toyota with this tweet.

While the Xfinity Series cars are dust in the wind this weekend, as they aren’t racing, the Cup Series and the Gander Outdoors Truck Series carry on as they go to Kansas Speedway this weekend.

Look for Johnny Sauter to find the yellow brick road that leads to back-to-back victories on Friday night in the Digital Ally 250 (8:30 p.m. ET on FS1), while Joey Logano should run well on Saturday night.

He can set the record next week if he gets a top 10.