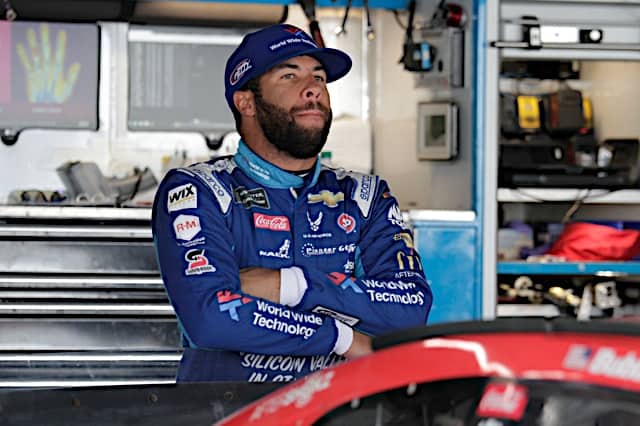 The opening three months of the Monster Energy NASCAR Cup Series season haven’t gone the way Bubba Wallace had hoped for. But he’s looking to put the negatives behind him.

Wallace, 25, is in the midst of his second full season at the Cup level and currently sits 28th in the championship standings through 10 races, 23 points behind Daniel Hemric, his closest Richard Childress Racing affiliation teammate in the series.

With a best finish of 17th at Martinsville Speedway, Wallace admits he has not had an ideal start to 2019.

“I’ve caused some of our issues,” Wallace told Frontstretch at Dover International Speedway. “We’ve been behind on where we were last year; speed wise, performance wise, we just haven’t had the finishes that we’ve wanted. We’ve got to keep going. We’ve got to keep digging.

“I get frustrated. I get down and out, yell and scream at these guys and they yell and scream back. That’s what you need. You don’t give up on your team. You’ve got to go through the hardships and hopefully it all turn around eventually.”

In the opening 11 races, Wallace has an average finish of 26.9, more than two positions worse than his 2018 mark. However, he believes the team is working well together through the hard times.

“I think the chemistry that we have,” Wallace said of the biggest strength for the No. 43 team. “It’s been a lot of fun coming to the race track and starting off the weekend. We might not get the results that we want, but we damn sure have a good time. Off the track, at the track, we try to make sure we shed a positive light.”

For years, Richard Petty Motorsports hasn’t had the resources that some of the Cup “Goliaths” have. Prior to Aric Almirola‘s 2014 victory in a rain-shortened July Daytona race, the No. 43 hadn’t won since John Andretti was victorious at Martinsville in 1999.

Since RPM solely came into existence in 2009, they have picked up five victories, three of which came at road courses: Kasey Kahne in 2009 at Sonoma Raceway and Marcos Ambrose in 2011 and 2012 at Watkins Glen International. Almirola won the superspeedway race at Daytona, while Kahne found Victory Lane at Atlanta Motor Speedway in 2009, the team’s only win on a non-road course or superspeedway venue.

But Wallace has a standard of what he considers a successful day.

“A top-20 finish is a good day for us no matter where we go,” he said. “We’ve been banking on some guys falling out and having some bad days, and being able to capitalize on that.”

At Talladega Superspeedway (April 28), Wallace was having a strong run early. After starting 28th, the No. 43 rocketed inside the top five in the opening 10 laps before spinning out in front of the field after making a move to the inside lane behind Ryan Blaney. Six cars were involved in the incident and Wallace ended up 39th.

The four superspeedway races have been the great equalizer over the years, and not getting the chance to perform well there was a tough pill to swallow for the Alabama native.

“I feel like legitimately we have four shots to win and that’s all four superspeedway races,” Wallace said. “At the beginning, we had a Chevy deal where all the Chevys were going to work together. The timing of my runs and where the holes were in place on the bottom, I couldn’t get down. I don’t need to be up there leading laps. It looks good for us, but at the end of the day you know you put yourself at a bigger risk.

Talladega was a low for Wallace at the Cup level, but he’s faced other downpoints in his career. While driving for Roush Fenway Racing in the Xfinity Series, he lost sponsorship and wasn’t able to compete for the series title in 2017, when he says he was told sponsorship would be there. Wallace mentioned a few years back his family was going through some personal issues, which has toughened him up with the lows.

“I’m good with putting all the negative stuff behind me and focusing on what I need to do and I think that’s a strong suit for me,” he explained. “Eventually, it will wear off on you but right now I’m still young and I can do it. I’ve gone through a lot of downs in my career, and I think that’s been able to help with how I’ve been able to handle it. It seems like we can’t catch a break.”

As for what’s the biggest thing Wallace has learned from his rookie campaign, it’s taking what the No. 43 will give him on a given day. But when he has a bad run, it’s hard for him to get over it.

“I still struggle with letting the bad races go,” Wallace added. “I dwell on them too much. I’m super hard on myself. As dumb as it sounds, I’ll get on social media and I’ll see the stuff that you’ll read on there. I’m like ‘man, I do suck.’ I take that to heart, knowing I can outdrive any of those armchair racers any day.

“I don’t have to prove anything to those guys but there’s a lot I have to prove to people around here,” he continued. “We know the circumstances that we’re in, and bringing up tore up racecars is not what we need to do. If it’s a 25th-place racecar, we need to bring it home in 25th.

“I think last year I was trying to turn a 25th-place car into 20th and it caused us some wrecks. This year, I’ve definitely looked at that. Talladega might not seem so, but other than that it’s taking what the car will give you no matter how frustrated and pissed off you are.”

How many like stories have been printed regarding the GREAT BUBBA since forever? SMH.

while i’m just an observer, i think bubba needs to remember that yes, he’s got great perks with being in cup, flying with airforce, he needs to focus on the task at hand. get time in simulator. yes he’s with a childress satellite team, but can’t he use childress’ facilities? since cup and xfinity cars are closer to being the same, i’d be trying to get more seat time to run laps. he needs to remember a race is 500 miles or laps long, not 10.

petty has notoriously always struggled with equipment and funding over the past few years. but having car and driver run decent week in and week out might help the financial situation. sponsor wants to see their “billboard” get tv coverage and not in the highlight segment from wrecking. yes some wrecks you’re a victim of being in the wrong place at the wrong time, but you head and whole self need to be focused on the race and not arguing with crew. they changed crew chief, and apparently that wasn’t issue.

remember, princess sparkle pony went through a slew of crew chief’s, as well as dale jr. driver crew chief is a very intense relationship. and if driver has opinion of his crew/crew chief that differs from everyone else, then mediation needs to happen to get everyone on the same page. results won’t come until attitudes change.

He can’t catch a break he says. We’ve been banking on some to have trouble and fall out so we can capitalize on that. Sounds just like ride around Danica to me. Now what sponsors wouldn’t want to jump on board.

Well that’s a relief. Putting the negatives behind him and focusing on the positives should fix everything.
Hell of a plan there Bubba.

in his defense, even God couldn’t make the 43 go any faster…

As I understand it Petty does not run the team or dispenses the monies, so his name suffers by association. I recently saw a video with a person trying to make major corporations guilty of not sponsoring Bubba.
I would like to see the 43 & 21 be more competitive.