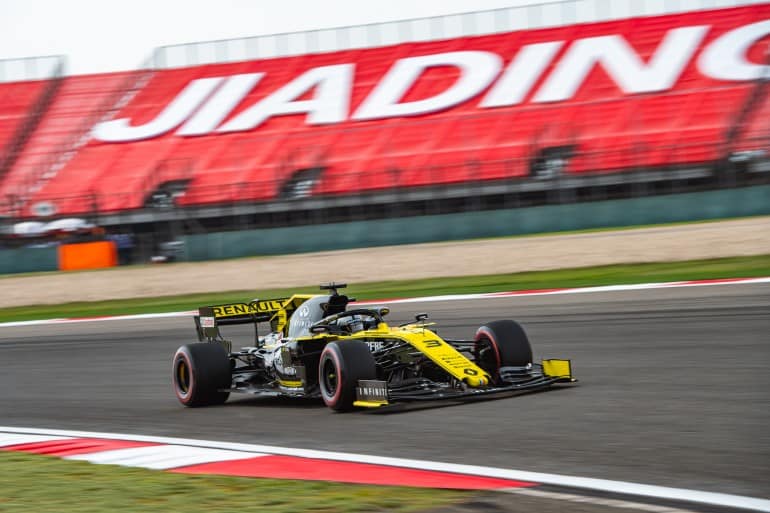 Other than the news coming out of F1 that this could be the last Spanish Grand Prix, at least in Barcelona, it has been a slow news week, so lets have some fun! Let’s get together and put on our tin foil caps and do some speculation by comparison. Today’s topic is Renault and their gorgeous yellow and black livery (my second favorite on the grid behind Mercedes).

Renault has been a very interesting team in F1 throughout the last two years. They are the only works team that is mired in the midfield. However, there is a lot of optimism with the French squad. A refreshed driver lineup of two hungry drivers in Daniel Ricciardo and Nico Hulkenberg, they are out of the woods for negative press after releasing Red Bull as a customer, yet they still face their struggles as they are currently being outperformed by their customer team McLaren (which I predicted in my preseason testing article before the season — no big deal, I’m not a hero).

The team hasn’t seen both drivers cross the finish line in any of the first four races, but in the first three races, they had the pace to be in the top six or seven. The severe inconsistency brings concerns with the optimism for Renault. I, personally, am on the optimism train and on the Renault bandwagon because they have risen from being at the back of the grid with Manor to competing for fourth in the standings. I have seen a rise like this before, and that rise was by the current F1 powerhouse, Mercedes AMG Petronas.

First, we need to look at how both teams began in their current forms. Before Mercedes was dominating the field from the start of 2014, they took over from a Brawn GP team that dominated the first part of 2009 and won the championship, a team that ran the engine that the works team took over. With a team roster consisting of Ross Brawn, Michael Schumacher, and a young promising Nico Rosberg, Mercedes had the manpower and experience of winning. While they started 2010 with high expectations, they quickly came down to earth and the goal was to build a competitor, yet they didn’t compete for two seasons.

Around this time, the announcement for the engine regulation change was announced for 2013. While it was later pushed back to 2014, Mercedes used their massive budget of a works team to research and develop the parts needed to make a dominating team through the Red Bull years of 2010-2013. They also brought on Lewis Hamilton in 2013. Many thought moving from McLaren to Mercedes was a terrible decision, as McLaren was looked at as one of the best teams in 2012. Sound somewhat familiar, mate?

Renault rejoined the field in 2016, starting a works team virtually from scratch after taking over a Lotus team that ran Mercedes engines in 2015 (a Lotus team that took over from Renault but then ditched the Renault engine in the hybrid era). They were a backmarker team in their first season and has made the jump to a “best of the rest” contender just two seasons later.

While they have yet to reach the podium in their current outfit, the rise from being at the back of the grid and consistently out of Q1 to consistent point scorers is very promising for Renault.

I know you’re reading this and seeing me compare the super team Mercedes and midfield Renault and thinking about how Mercedes won a race in 2012, was on the podium three times in 2010, and was the second best team in 2013, while Renault of today is nowhere close to those marks. My counterpoint is that Mercedes also came up in a totally different era.

The 2010s, in my opinion, were one of the best eras in F1 history in terms of competition, other than maybe the 2005 season. Despite the fact that Red Bull won four straight titles, there was much more parody in the running order. Yes, there was sort of a set top three in Red Bull, McLaren, and Ferrari; however, the gap from the midfield was much, much shorter, primarily in 2012, two years before the regulation change as we currently sit in 2019.

In 2012, there were seven winners in seven races, six different teams won a race, including Lotus (what would later become Renault) and Williams. Sergio Perez in a Sauber finished on the podium three times with a second place at Monza (yes, that Monza) where the 2018 gap from the last finishing Red Bull and first finishing midfield car (Esteban Ocon), was 40 seconds.

Things that happened in 2012 would never happen in the modern era. There have only been two other occasions when a team that wasn’t Mercedes, Ferrari or Red Bull finished on the podium in the last two seasons and they both happened in Baku — Lance Stroll for Williams in 2017 and Perez with Force India in 2018. Well done, Baku.

The current gap between the midfield and the top teams is the biggest battle Renault has to fight in the current Hybrid era. “Best of the rest” is as high as Renault could go in 2019 and probably 2020. As a works team, they also work with a large budget, though the deciding factor was engines in 2014.

There is plenty of time for Renault to figure out that key factor that’ll determine the grid order in 2021. However, Renault will need to up their engine power while also fixing reliability to bridge the gap to the top teams and compete once the regulations change in 2021.

While they won’t be alone in that research, Mercedes, Ferrari and Red Bull are also there developing a new car. However, it does feel from news reports and discussions about the new regulations that these three teams are fighting new terms of the regulations instead of understanding and adapting. There was a report in 2017 that Ferrari and Mercedes were threatening to pull out from F1 due to the direction Liberty Media is taking the racing series. Although they have softened on that stance, Sebastian Vettel has hinted at leaving F1 after 2020.

Hamilton is at the point of reaching all of the records he needs to be one of the greatest drivers of all time. There is potential he could match Schumacher’s seven championships in 2020, and there is not much more that the British driver needs to accomplish in F1.

Red Bull is putting tremendous pressure on Honda to perform. Helmut Marko said that the Red Bull brand will pull out of F1 if the Honda partnership is not successful.

There are a lot of things in the air that could bring change to the top teams in the next few years that could hamper their development of the new car.

Renault has their driver lineup secure. They have been lying in the weeds as far as the new regulation developments. If they can get their engine up to snuff with Mercedes, Ferrari, and Honda, Renault could be hitting its stride once 2021 hits, just like Mercedes in 2014. Renault will need to hit a serious home run like the Silver Arrows did to accomplish this goal.

imho one of the things F1, and all major motorsports series for that matter, needs is for teams to be able to survive and grow from backmarker to midpack to contender. Wouldn’t it be nice if Manor was still around? Unfortunately that doesnt seem to be the case right now. Renault as a factory team may be the exception.

heh, no one is the next mercedes yet.
mercedes is still firmly on top with no truly significant challengers.
they have a great car, strategies reminiscent of Ferrari when they were on top and most importantly have proven very adept at manipulating teams and the the press into believing that ferrari or anyone have an inkling of a chance.

I wish it were so.