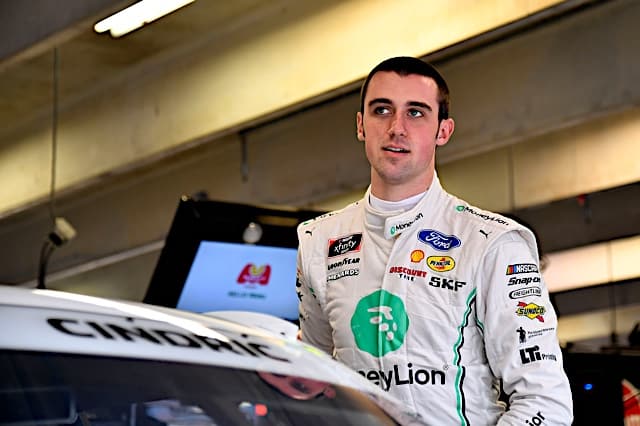 Did You Notice?… Austin Cindric is quietly becoming a competitive and potentially playoff Xfinity driver. Racing full-time for Team Penske, he’s already finishing on average over 10 spots higher than he was at this time last year. I believe part of that is because he has a steady schedule.

Cindric’s 2018 stats through the first 10 races

As you can see, his average finish (currently) is 7.8, which is far better than how he performed last year. Granted, Team Penske is a NASCAR powerhouse, but I believe Cindric proved he belongs in Xfinity full time. He did have three poles last year, and finished eighth in the standings. Part of that could be because Brian Wilson was his crew chief for the final eight races, piloting Team Penske’s flagship No. 22.

Wilson was already (somewhat) familiar to Cindric; he led Cindric’s 2016 truck team for a couple of races. However, Cindric didn’t really have that consistency until the 2018 playoffs. Part of this is due to the Monster Energy NASCAR Cup Series drivers competing in a few Xfinity Series races. This is good for the sport in some ways, as Cup drivers help raise viewership levels. More viewers and fans at the track is very important. Unfortunately, it doesn’t exactly give Xfinity drivers a chance to really prove themselves. Cindric performed well in the playoffs and earned a full-time ride in a strong, contending Ford.

Penske (and Cindric) are still searching for their first victory this season in the Xfinity Series. As long as Cindric keeps up the pace with JR Motorsports, Stewart-Haas Racing, and Richard Childress Racing, he will have another shot to win the championship.

Compare Cindric to a top driver like Joe Gibbs Racing’s Christopher Bell. Bell has driven full time in the Truck and Xfinity Series (cumulatively) since 2016, and seven truck races in 2015. In the trucks, he drove for Kyle Busch Motorsports and flat-out dominated. Such was the case as well when he converted to full-time Xfinity racing for JGR. Check out the stats below:

Remember, the Truck Series only contained 23 races, and the Xfinity series has 33. Yes, KBM and JGR are both top-tier and well-funded teams. however, this kind of extensive superiority really conveys Bell’s solid talent.

One item of note: Bell had the same two crew chiefs throughout most of the two seasons. Ryan Fugle took the role in 2017, and Jason Ratcliff has been Bell’s crew chief since the 2018 Xfinity Series season began. The comparison between Bell and Cindric is rather moot, since Bell performed very well in his 2015 debut.

In seven races that year, he won Eldora, had two top fives, three top 10s, averaging an 11.9 finish. This year, Bell already has three victories, including the most recent Monster Mile. He also has six top fives, seven top 10s, and ends the race 7.7 on average.

I think when Bell moves up to MENCS, a void will open, and drivers like Cindric could step in that position. There’s also other young competitors like Cole Custer and Tyler Reddick who have proved themselves worthy of a Cup ride. The upcoming Silly Season will be interesting.

For now, they should focus on competing for victories and making the playoffs (after the break). The Xfinity Series next race is the Alsco 300 at Charlotte Motor Speedway on Saturday, May 25.

Passing the car in front of you by taking him out of the race is not momentum or talent.