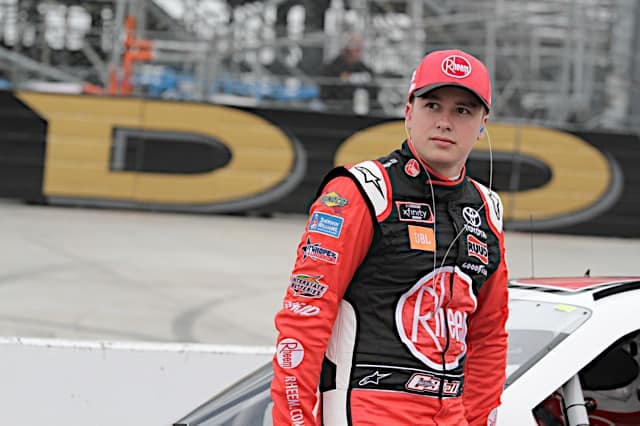 When Christopher Bell won seven races in 2018, arguably having the best rookie campaign in NASCAR Xfinity Series history, everyone knew he was the real deal. Yet at the end of the season, he failed to win the championship.

That result came mostly due to the championship being decided in one race. Both Bell and Justin Allgaier were dominant throughout the regular season, but in the championship at Homestead-Miami Speedway, Tyler Reddick found the line — rim-riding for 300 miles en route to winning the race and championship.

Even with the agony of defeat, Bell has followed on the path he started in 2018. Through the opening 10 races, the No. 20 team has three victories, six top-five and seven top-10 finishes, most recently taking the checkered flag at Dover International Speedway last weekend.

“[2019’s] been good. I think our cars have been fast and capable of winning every race,” Bell told Frontstretch at Dover. “I would like to win a little bit more, and we’ve got great opportunities coming up. We’ve had great runs, so I’m pretty happy with it.

“Last year, we were really fast every week, too, but obviously we’ve won more races this year than last year at this point. We just need to capitalize on the fast cars that we bring.”

As a driver, Bell has taken the next step. The No. 20 car has led at least three laps in every race this season, totaling 498. Allgaier and Cole Custer are the other Xfinity regulars that have paced the field more than 200 laps this season.

Though Bell is off to a scorching start, he does believe there’s room to improve, despite admitting it’s challenging to pinpoint a flaw in the No. 20 team. But there are some there.

“Just getting caught up in other people’s messes,” Bell said of his mistakes. “At Richmond [Raceway], I ran into the back of a car on a restart, and it ruined my chances. Just a couple things like that and capitalizing on fast race cars. We just need to put it together week in and week out, finishing where Tyler [Reddick] is finishing and not first, second, 30th.”

Currently, the No. 20 team sits second in the championship standings, 32 points behind Reddick. But with three wins and four stage victories, Bell has already accumulated 19 playoff points with 16 races remaining in the regular season.

The focal points for Bell are continuing to put full races together leading up to the postseason and not get out of rhythm.

“Just finishing races,” Bell added. “That’s kind of been my downfall every season, Ultimately, if I can win races more than I crash out, I’m happy with that. Just got to continue to get better at finishing races and not taking myself out of them and continuing to win.”

Bell admitted he’s like Kyle Busch in terms of hating to lose more than enjoying triumph, stating, “This sport is relatively simple. If you win, you get promoted. If you lose, you get demoted. I’ve always prided myself on winning races, and hopefully, that continues.”

Most fans, media and people within the sport label Bell as the best prospect in the lower divisions of NASCAR ready to move to the Monster Energy NASCAR Cup Series. Hell, the 24-year-old was getting questions about it 10 months ago when he won three consecutive races (Kentucky Speedway, New Hampshire Motor Speedway, Iowa Speedway).

The questions have continued to come Bell’s way regarding any move to the highest level of motorsports, and he’s tired of it.

“You’ve got to let all that stuff go in one ear and out the other because, ultimately, you’re only as good as your last race, so you’ve got to perform every time you go to the track.”

Since Bell’s been the poster boy of the next best thing, you’d think there would be added pressure of losing races or the championship. Ironically enough, there isn’t.

“The way that this championship format works is you’ve got to be good for one race and, unfortunately, that was one of our worst races last year,” he said. “We know that we have to improve upon that, and we want to win the championship badly. It’s still only one race, and it’s a really important one, so we’re working really hard. If we don’t win the championship, it’s not going to define our season.”

As for how many races Bell wants to win in 2019, he doesn’t have a set number. The Oklahoma native just wants to “be a winner.”

But is Bell the championship favorite?

In two Xfinity starts at Homestead, Bell has an average finish of 23.5. He did, however, win the Gander Outdoors Truck Series race and championship in 2017 at the same venue.