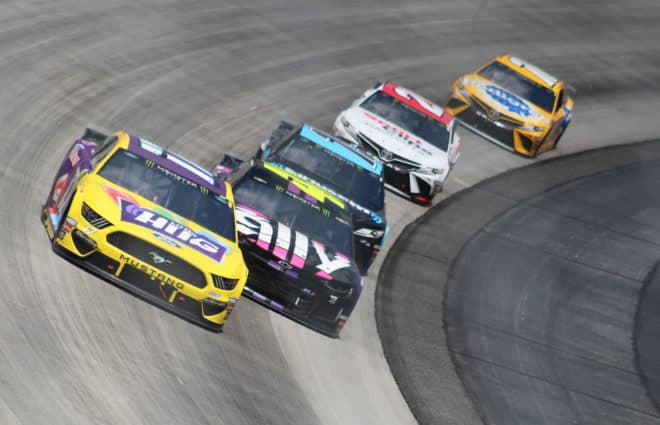 Odds and Ends Around the Track: Kansas Spring

The toughest thing in auto racing is trying to put the technology genie back in the bottle.

When I first received NASCAR credentials back in 2001, I recall being excited about going to my first NASCAR test at North Carolina Speedway, now known as Rockingham Speedway. Watching teams of mechanics trying all kinds of mechanical grip changes to these poor downforce race cars was fun. One guy was crunching numbers on a computer and nine mechanics were working over the car. Fast forward to a test two years ago at Chicagoland Speedway and there were two tables full of data analysts and three mechanics. The times, they were a-changing.

Will Inmates Run the Asylum

Kyle Busch really needs to learn how to explain how he feels about NASCAR’s rule packages. “This package blanks. No blanking question about it. All I can do is bitch about it, and it will fall on deaf ears, and we’ll come back in the fall with the same thing,” said the Rowdy one right after the race on Monday.

Just in case you think he only complained about the rules because he lost, remember that Busch wasn’t too pleased with the first Car of Tomorrow Race at Bristol Motor Speedway even though he won.

If you think Busch was alone in his disdain for the rules, his take was seconded by Bob Leavine of Leavine Family Racing — minus the expletives. You won’t find a nicer NASCAR owner than Leavine, who after some active back-and-forth exchanges answering fans’ questions on Monday (May 6), quickly stopped being critical under order from NASCAR. Other drivers were more diplomatic in their response to questions from the media, but had a cleaner and more politically correct version of what Busch said.

They didn’t think this was the right package. Low and behold after NASCAR instructed drivers, teams and anyone with a stake in the sport to quiet down on Tuesday, they suddenly announced a change in aero rules at select tracks this season. NASCAR is in a tough spot. Changing rules in the middle of the season adds cost to teams at a time when every team in the garage area is trying to find ways to trim costs.

The switch to tapered spacers at Talladega Superspeedway from the usually more restrictive restrictor plates gave us the best racing at ‘Dega that we have seen in many years without the two-car-attached-tango. NASCAR is full of some very smart people. The NASCAR garage is also filled with very smart people who will find a way to uneven the playing field that NASCAR is attempting to level.

More speed is never equal to better racing in any form of motorsport with the possible exception of drag racing. It is the differential of speed that fuels great racing. But in an era where the cars are closer in performance than ever before and tires are built to last, it is tough for anyone to gain an advantage except for by using the clean air from being out front.

NASCAR has appeared to listen to the teams and drivers by deciding to make some further tweaks in the rules, albeit not at Dover for the fall race. I have a tried-and-true axiom of racing that I wish NASCAR would try just once. Dan Gurney famously said the best racing happens when you have less downforce and more horsepower. NASCAR could accomplish this by testing a non-splitter and non-side-skirt package at a test to see if they can remove some of the clean-air effect.

They surely don’t need to listen to me because that would be like letting the inmates run the asylum, but just maybe making the cars act more like stock cars and less like Formula One with fenders might help.

Anyone here that used to collect diecasts of their favorite NASCAR driver’s car? Hey, you in the back, are you raising your hand because you did buy diecasts or do you just need a bathroom break? Looking at the falling prices for diecasts of today’s NASCAR stars, I have to believe the collector hobby has gone away. Back in the day teams used to run special paint schemes to try to get us NASCAR nuts to buy more than one diecast per year.

Now, any race fan who does not have a trust fund from Bill Gates couldn’t afford to collect NASCAR diecasts because there are too many changes. Each and every week, we see different colors on the track and different sponsor combinations for almost half of the racing field.

Even the biggest of the big teams have three or four different sponsors for their guys. The smaller teams might have 15 or more sponsors represented on either the hood of the quarter panels during the season. Maybe instead of collecting NASCAR diecasts, the powers that be can team up with the folks at Disney for a movie called “1,001 Sponsors.” It might sell.

Okay, so I got way too bold with my “Upset Special” last week, but if Suarez had gotten a debris caution at the right time, NASCAR history might have been made (Okay, so that is a reach, but…). One thing seems to be true with this new aero package the teams are running this year: the best teams have really figured this out, and there is a huge split between the drivers at Hendrick Motorsports on how well they have adapted to this new package. Watching Johnson struggle is like watching NASCAR legend Dale Earnhardt that first year on bias-ply tires. Yes, Earnhardt could still get it done, but he didn’t look comfortable all season just like Johnson with this huge spoiler.

This week at Kansas Speedway, the Race Monitor Fantasy Rating has fewer top contenders as a result of certain drivers having more of a knack for this high downforce package than others. Kyle Busch and Martin Truex Jr. are tied at the top with 185.8 points out of a possible 200. Kevin Harvick and Joey Logano are the only other drivers over that 180-point mark that has a high correlation with wins this season.

Win: Kevin Harvick-Has always been so strong at Kansas since it opened

Place: Kyle Busch-Rowdy showed his displeasure last week, and he races great when he is mad

Show: Joey Logano-Love the strong runs by those Team Penske Fords all year

Dennis a.k.a. DMIC has been covering NASCAR racing since 1998. After spending 23 years as a professional weather forecaster, Dennis still didn't know what he wanted to be when he grew up, so he started covering auto racing full time. He is the moderator of the Race Track Business Conference - an all-day educational seminar covering the business of speed - and is the owner of DMIC Media & Marketing where he spends his time mouthing off about all kinds of sports. He is also the play-by-play voice for the professional Ultimate Disc team the Chicago Wildfire of the American Ultimate Disc League. Dennis can be heard every Saturday on The Final Inspection on 105.7FM The Fan in Milwaukee, Wis. talking NASCAR, and you can listen on the Radio.com app.
Previous Truckin’ Thursdays: Questions Arise About Kansas Field Size
Next 2-Headed Monster: Kyle Busch Unloads After Dover, Crass Remarks or Constructive Criticism?