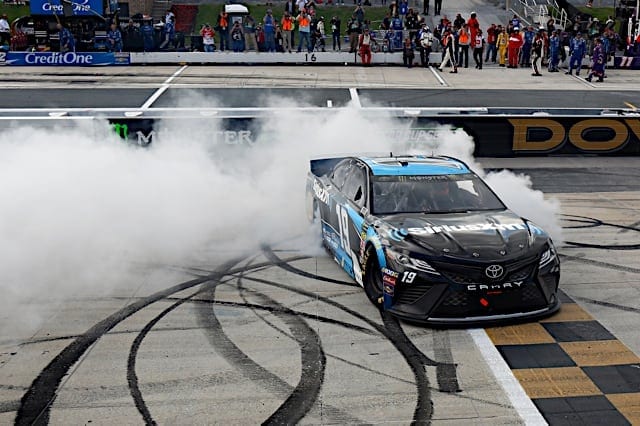 Despite waiting out the Sunday washout, Martin Truex Jr stormed through the field to claim his second victory of the season at Dover International Speedway. Has Truex finally found his mojo?

Miserable might just be the best word to sum up Denny Hamlin‘s Dover weekend. The Virginian was never able to find an ounce of competitiveness and had an uncharacteristic struggle all day. Can Hamlin make a quick turnaround this weekend at Kansas?

Alex Bowman arguably had the best race of his career at Dover. Like Truex, the No. 88 car stormed through the field after starting in the back of the pack too. With two consecutive runner-up finishes, can we expect Bowman the Showman in Victory Lane any time soon?

With wheels on the ground, fenders still straight, and tires fully inflated, Kyle Larson did the unthinkable: he crossed the finish line in one piece. The real question is, can he stay in one piece?

With the regular season nearing its halfway mark, questions continue to rise. Although there are still plenty of things to sort out, the stars of NASCAR are out to prove something. Are they a championship favorite? Does he deserve a playoff spot?

As the Monster Energy NASCAR Cup Series drivers continue to jockey for position, our Frontstretch experts were tasked to determine the top 12 drivers ahead of the rest. With that, here is this week’s edition of Power Rankings…

Much to the disappointment of the NASCAR community, the rain came down on Sunday, forcing the Gander RV 400 to be postponed to a Monday at Dover International Speedway. Despite the rains, Kyle Busch was (barely) able to tie another record.

Busch held on to the 10th-place position, equaling him with Morgan Shepherd for the most consecutive top 10s to start a season in the modern era with 11. If there is any doubt about who should be at the top spot this week, it has to be the Candyman… er… uh… the dog food man.

Despite winning stage one, Logano faded, but still wound up finishing seventh at a track where he is winless. While Logano’s performance may have been indicative of Team Penske’s mediocre record at the Delaware circuit, the Connecticut native heads to Kansas this weekend, a track that has delivered two victories for the 28-year-old.

“Did some things, but not much of importance.” -Rob Dutzar Jr, Rob’s NASCAR Blog

Despite starting in the back, Truex was able to navigate his way to the front, much of which was aided by the help of a surprising rabbit, Alex Bowman. After Bowman lead him to the top 10, Truex capitalized and stormed his way to the front, this time taking Bowman with him. The unlikely duo both did something for the second time this season. It was Truex’s second victory and Bowman’s second runner up this season. It must take two to tango.

Despite having NAPA Brakes on his car this weekend, there was not very much braking, in stark contrast to previous Dover races in recent memory, as drivers were able to roll the center of the corner exorbitantly faster because of the new package. Fresh off of his Talladega celebration, Elliott was able to place the “brakes” car on the pole. Elliott led some opening laps and hung around the top 10 most of the day. Is Chevrolet trying to creep back in the picture?

The #NAPABrakes team is keeping up with @chaseelliott as the laps wind down.

Tune in to @FS1 to catch the finish @MonsterMile. pic.twitter.com/HaXQqyHl6h

“I’d be watching that  No. 9 closely in the next few weeks. I have a feeling he’s about to go on a little run, and grab the win at Kansas.” -Trey Normile, Gator Games

Bruh, stay woke here. Don’t be salty that your homie Harvick hasn’t won a race yet. All is gucci in Harv’s world. My man’s slayin’ it. He’s third in points. Trolls, quit throwing shade. Don’t be shook when he rolls his wheels into Victory Lane. If you’re a Harvick fan, that would be pretty dank. Every four fan would be like yaaaasssssss!!! I can’t even.

#MillennialCar is finally here IRL. Who else is ready for @KevinHarvick and the #MillennialCar to slay at the #AllStarRace? pic.twitter.com/3hqpFbM6KY

“Just kind of there, surprising after winning “yesterday.”” -Dutzar Jr

Long run speed dogged Keselowski at Dover. The Michigander just needs 11 more spots to claim the win this fall in the playoffs. Instead, it looks as if he is focused on “next” fall. That’s a long way out Brad. Are you sure about that?

We finished 12th with it and need to find 11 more spots next fall. https://t.co/0yZdjttCGq

“Is it me or is anyone getting some 2012 vibes from this Michigander?” -Rob Tiongson, The Podium Finish

As stated prior, Denny Hamlin had a very rough go at it on Monday, and no, it was not the Monday morning blues. As documented by our own Davey Segal, the Virginian needed assistance exiting his vehicle and was immediately looked at by a medical team as exhaustion was written all across his face. While Hamlin was experiencing discomfort, one must credit him for being able to persevere through the entire event, despite an ill racecar.

.@dennyhamlin was being attended to by medical staff on pit road once he exited his car. Looked exhausted.

He was seen on a golf cart being wheeled away for further treatment. #NASCAR pic.twitter.com/2pEIA6Ac1s

“Despite the perils involved, this is why we love racing and all the grit it takes to do it. Drivers will all experience horrendous days. At Dover, it was Dennis’ turn.” -Zach Gillispie, Frontstretch

As names like Bowman, Jones, Larson, and Byron were able to muster up impressive runs in the Monster’s concrete canyons, Kurt Busch was among the contenders who faulted. Despite being amped up on an energy drink, the No 1 didn’t seem to have their normal spring in their step, which proved critical, as the Monster Energy car spent the majority of the day outside the top 10.

Weekend started off with huge promise, but we did not predict the best setup. Win as a team, lose as a team. #KB1 pic.twitter.com/2c8Hv4kwQY

“Just imagine if Clint Bowyer was sponsored by an energy drink.” -Gillispie

On this week’s edition of Clint Bowyer’s social media chronicles: Cash is out of control, Artie Kempner does his best Miles the Monster impression, and a sore loser wins.

Plus, your boss is at the race track and, with the rainout, Spotter Brett and Bowyer head to a Mexican restaurant.

“And now let’s hear the many days of folks asking when Clint will win at his home track….for like the 15th year in a row.” -Tiongson

Two second-place finishes in a row? With the way the showman is running, are we seeing shades of Phoenix 2016? Someone, please give this guy a beer already…

Thanks Dale. I need a beer https://t.co/CLeuCF69Kx

Blaney’s consistency issues continue to mount as an uneventful Monday greeted the aspiring Jedi. Despite his shortcomings, the 25-year-old hopes to finally find his way up the leaderboard.

Check out my paint scheme on this awesome @drinkBODYARMOR limited edition bottle!  Only 12 bottles per Circle K stores in Charlotte so grab one, check out @drinkBODYARMOR and use #BlaneyBottle for your chance to win great prizes!  #TeamBODYARMOR pic.twitter.com/260jjdrd4A

“While the Jedi Knight has struggled some in recent weeks, we are returning to Kansas.  Carry on my Team Penske son.” -Tiongson

“BodyArmour is pretty good by the way.” -Gillispie

What a difference a week makes.

Last week, Larson was rolling down the back straightaway at Talladega

This week, Larson was rolling around Dover at a blistering pace, en route to a gratifyingly efficient third position

Thus, he did the unthinkable…

“Maybe that trip to the magic store with Jeff Gordon eliminated the bad juju for Yung Money.” -Tiongson

“Who knew that Jeff Gordon was a psychological spirit healer.” -Gillispie