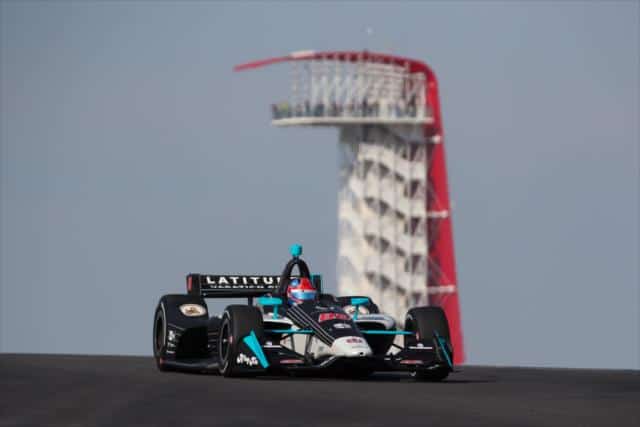 The Boss wasn’t known for his love of racing. But believe it or not, the man coined as “the head of the evil empire,” otherwise known as the New York Yankees, was passionate about open-wheel racing.

That’s right. George Steinbrenner, the patriarch of the current Yankees ownership, loved racing, so much so that he even invested in a team back in the 1970s.

Now, the family name lives on, not just with the Yankees, but in the NTT Data IndyCar Series, thanks to his grandson, George Michael Steinbrenner IV, part owner of Harding Steinbrenner Racing.

At 22, the young Steinbrenner is exactly what the IndyCar Series needs and is what NASCAR lacks. He symbolizes a vibrant youth movement in racing, one that is desperately needed as the sport’s current owners continue to age without many knowing what will happen to their teams. The energy, passion and money he brings to the sport is creating a combination that can one day lead his team to be one of the series’ top organizations.

“There are a lot of expectations,” Steinbrenner tells Frontstretch. “But those expectations are part of the reason that I’m here. People gravitate towards that name because of what my grandfather was able to do and now what my uncle and father are able to do. Getting here, it was a big part. Now the pressure is on.”

Steinbrenner opted to invest in the open-wheel division rather than any other for a number of reasons, including his family’s previous involvement in the sport, eagerness to become a sports executive and, most of all, affordability.

The son of Hank Steinbrenner, a current part-owner and co-chairman of the Yankees with Hal Steinbrenner, he is in line to eventually take over baseball’s most valuable team, barring the unlikely family move to sell the team. In April, the Yankees topped Forbes‘ annual list of most valuable organizations, listed at $4.6 billion.

To put it into perspective, a top IndyCar Series entry can cost about $7 million per year, according to Forbes. That’s nothing compared to the bank accounts for premier NASCAR teams, which often exceeds $20 million for each car.

Regardless, the struggle to find funding, even with the Steinbrenner name, is real.

“The majority of our income that we bring in is from sponsorship,” Steinbrenner says. “We don’t have much prize money aside from the Indy 500. We don’t get a purse from ticket sales from each venue because they’re promoted by different people and companies.

“We have to bring in money from sponsorship. Trying to raise money for IndyCar racing is difficult. If I can make this successful, I feel like it will help me a lot in the long run.”

Fast forward to 2019 and Harding Steinbrenner Racing already has a victory with Herta at the Circuit of the Americas. But there is still work to do, and the series’ youngest owner is learning that quickly.

“The next two weekends were a great experience as well because we were at the top of the sport,” he says. “But then we struggled to execute one way or another. It shows you how intense the sport is, where you can be as quick as you can possibly be, but you can end up 24th if you don’t play your cards right.”

Which certainly happened. After winning his first race, Herta finished 23rd and 24th, thanks to fuel pressure issues and a wreck, respectively.

But for now, early-season poor results are somewhat irrelevant (as long as they don’t persist, of course). And as Steinbrenner attempts to make a name for himself and build his brand as a sports executive, other forms of auto racing need to look at this as an example of what to do in order to recruit new, young owners.

The IndyCar Series might not be as profitable as NASCAR, but it is certainly affordable for those who want to invest in the sport. Steinbrenner makes a case for youth who are wealthy, and it shows that there is growing interest in open-wheel racing, whereas NASCAR is struggling to find new owners with rising costs.

For the IndyCar Series, it certainly is refreshing to see a new face in the paddock, one who is committed to be in the sport long-term. Hopefully NASCAR can follow in those footsteps by making racing more affordable in order to have owners who can be around for decades to come, just like Roger Penske, Chip Ganassi, Jack Roush and others like them.