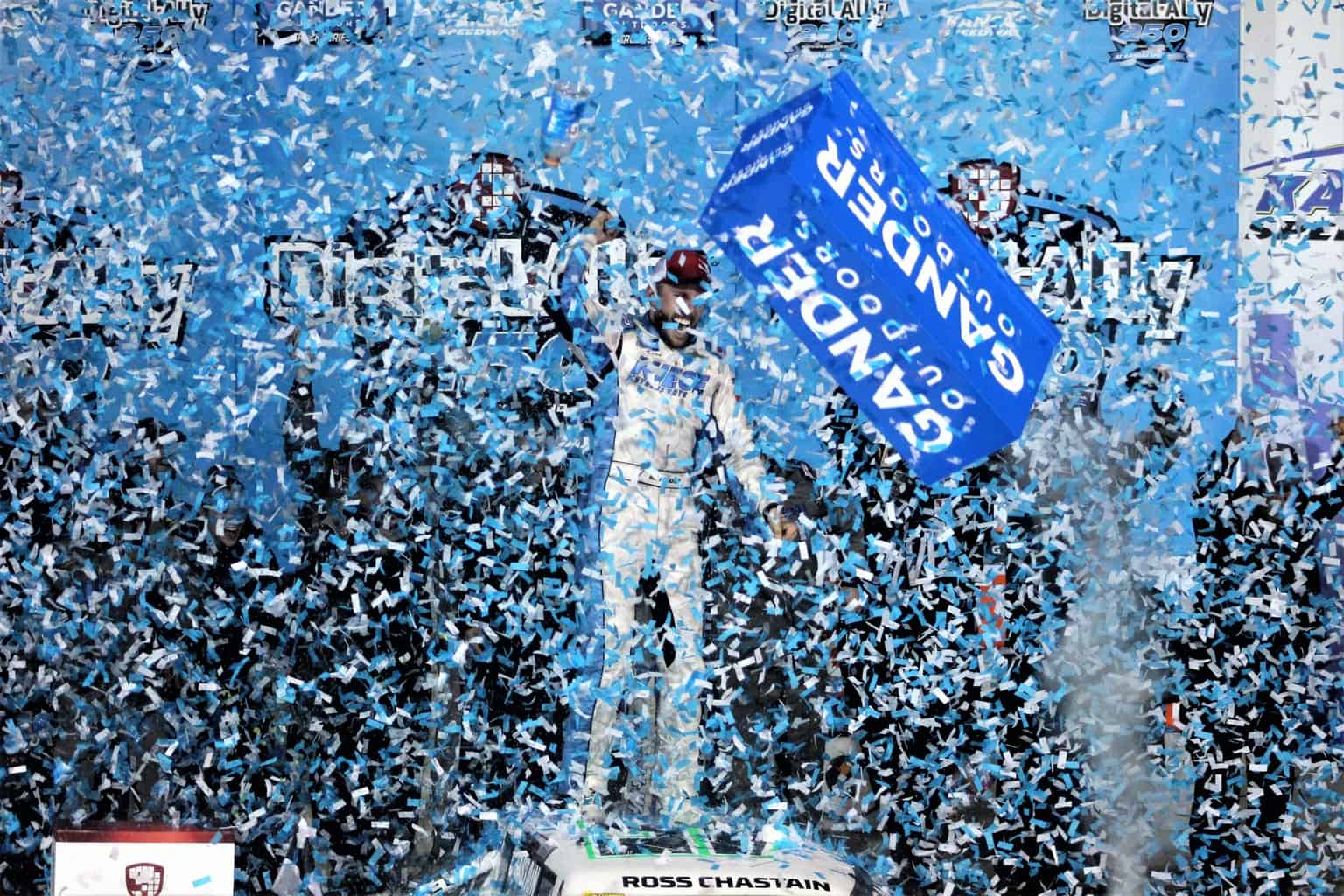 Friday night’s (May 10) NASCAR Gander Outdoors Truck Series race at Kansas Speedway proved to be as wild and unpredictable as Ross Chastain’s career.  The young NASCAR talent has been trying to rebuild during the 2019 season after a full-time NASCAR Xfinity Series ride with Chip Ganassi Racing fell through. Chastain has refused to give up, landing with Niece Motorsports in the Truck Series and overachieving with a small-time operation.

That effort paid off with a trip to victory lane at Kansas, Chastain’s first career win in the series. The No. 45 Chevrolet forged to the front when Stewart Friesen ran out of gas with only three laps to go.

“This is what sports is all about, comebacks,” a jubilant Chastain said after the race. “We had the rope by the tail last fall, and everything got taken away from us.  We didn’t quit though… I’m going to celebrate this one more than I did the last one [a NASCAR Xfinity Series win in 2018].”

It looked as if Friesen was on his way to finally finding victory lane after dominating the race. He swept stages one and two, leading the most laps and stayed out front during a flurry of late restarts.

But confusion in the pits led to Friesen only taking two tires instead of four on his final pit stop, pulling out before the truck was full of fuel. The miscommunication caused him to run out at the end, surrendering his first victory in the series and relegating him to a 15th-place finish.

“We’ll work on it,” he said after the race, shrugging his shoulders with an “I don’t know” when asked if that first victory was getting close. “We need to be better.”

Chastain’s first win in the Truck Series was also the first for his team, Niece Motorsports.  Chastain has run every single race in the top three series this season, driving full-time in Xfinity and the Monster Energy NASCAR Cup Series as well for underdog operations.

CGR was supposed to be his big break, a full-time NXS opportunity. But the sponsorship money unexpectedly dried up, forcing the team to shut down going into the season.

Turns out his new ride may wind up even better than that supposed dream opportunity. Chastain ran near the front all night long, shadowing majority leaders Friesen, Grant Enfinger and Brett Moffitt. His truck got loose late, leading to multiple spectacular saves before surging to second at the right time before Friesen ran out.

Near the end of the race, Moffitt and Enfinger tangled, costing them both a shot at victory although both came back and finished inside the top 10. Last week’s winner Johnny Sauter had early issues with the driveshaft, sending him to the garage very early on in the race.  Sauter would eventually finish 22nd, 70 laps down in the event.

The Gander Outdoors Truck Series will be back in action Friday (May 17) at Charlotte Motor Speedway. The race was run with heavy hearts after it was announced Mike Mittler, one of the series’ original owners, died early Friday at the age of 67.