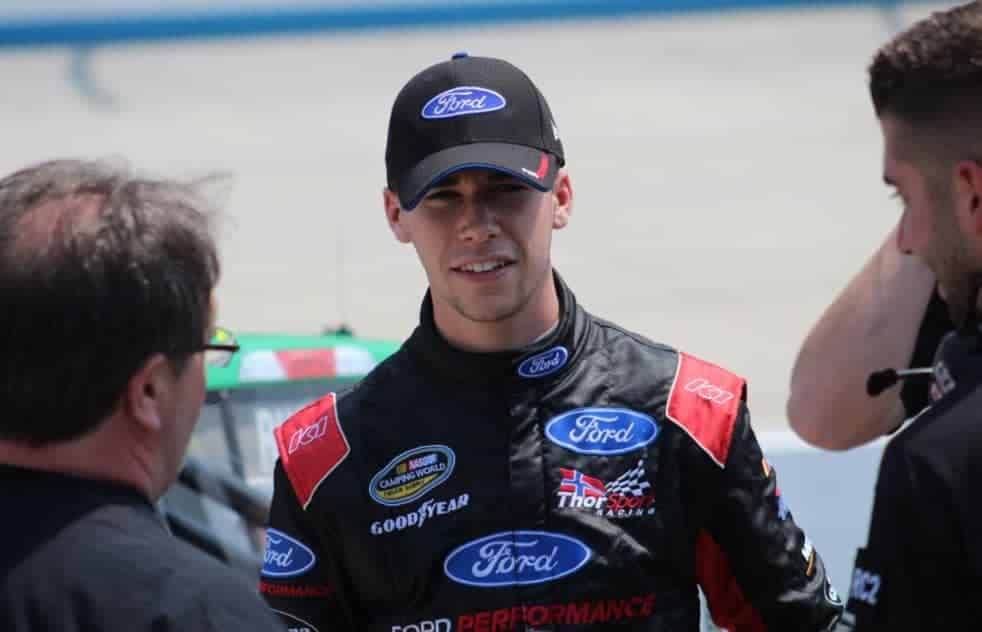 Ben Rhodes walked away from Kansas Speedway Friday night with a runner-up finish and his third top five in seven races this season.

“I was surprised today,” Rhodes said on pit road after the race. “I thought we were going to be lucky to get a top 10; I don’t know how we got second. A few good restarts and some luck on our part. It’s the first time that we’ve had stuff go our way in a race, especially when everything’s down.

“I thought we were so down and out, they told me to save fuel and I’m just like ‘what’s the point?’ I did it anyway.

We got a speeding penalty; we were in the back the majority of the race,” he said. “I’m just proud of how we were able to get the No. 99 Carolina Nut F150 back to the front but surprised nonetheless. I was about to wreck no less than 40 times tonight. I was a rolling catastrophe.”

Rhodes started 14th and didn’t manage to move inside the top 10 before the conclusion of stage one. He was 10th when stage two ended but hadn’t shown any real competitive, race-winning speed.

“We took a gamble on setup today and we won’t do that again. If they come back here, I will personally go to the truck and pull out all the changes they want and change it back to what I think is right with the gamble we took. They know better now, we all know better, but it was a gamble we all agreed to take.

Neither Rhodes or eventual race winner Ross Chastain would have even made it to the finish if not for the evasive move the driver of the No. 99 Ford made inside 20 to go.

Think this is called, "laying it all on the line." ?

As the last few laps ticked away, Rhodes made ever so small gains on the leaders but didn’t have enough time to close the deal.

“I think we were gaining a little bit. I was just finally starting to catch the draft. It was weird. I was having a hard time trying to get the draft off of Ross, but the last lap, I started getting close enough to finally start getting it.

“It was pulling me on the straightaways I just had to make such tiny gains in the corner – it was almost like maintaining it – and then let the draft pull me to him on the straightaways. It just takes some time. I just ran out of time at the end. If we had a little bit more, we might have got him, but the (No.) 4 (Todd Gilliland) was coming behind us.

Moving forward, Rhodes took away more about how he and his crew chief can communicate better with each other.

“This is our first season together. I’ve had three different crew chiefs in what is now my fourth year with ThorSport,” he explained. “I feel like I’m always rebuilding, and I’m rebuilding again with him. But that’s not a problem… it is but it isn’t.

“Our communication is getting a little better. We’re very direct to each other but I feel like we can get a little more clear with each other.”

With his runner-up finish, Rhodes gained a position in the championship standings and now sits fourth, 33 markers behind point leader and teammate Grant Enfinger. He’ll head to Charlotte Motor Speedway next weekend