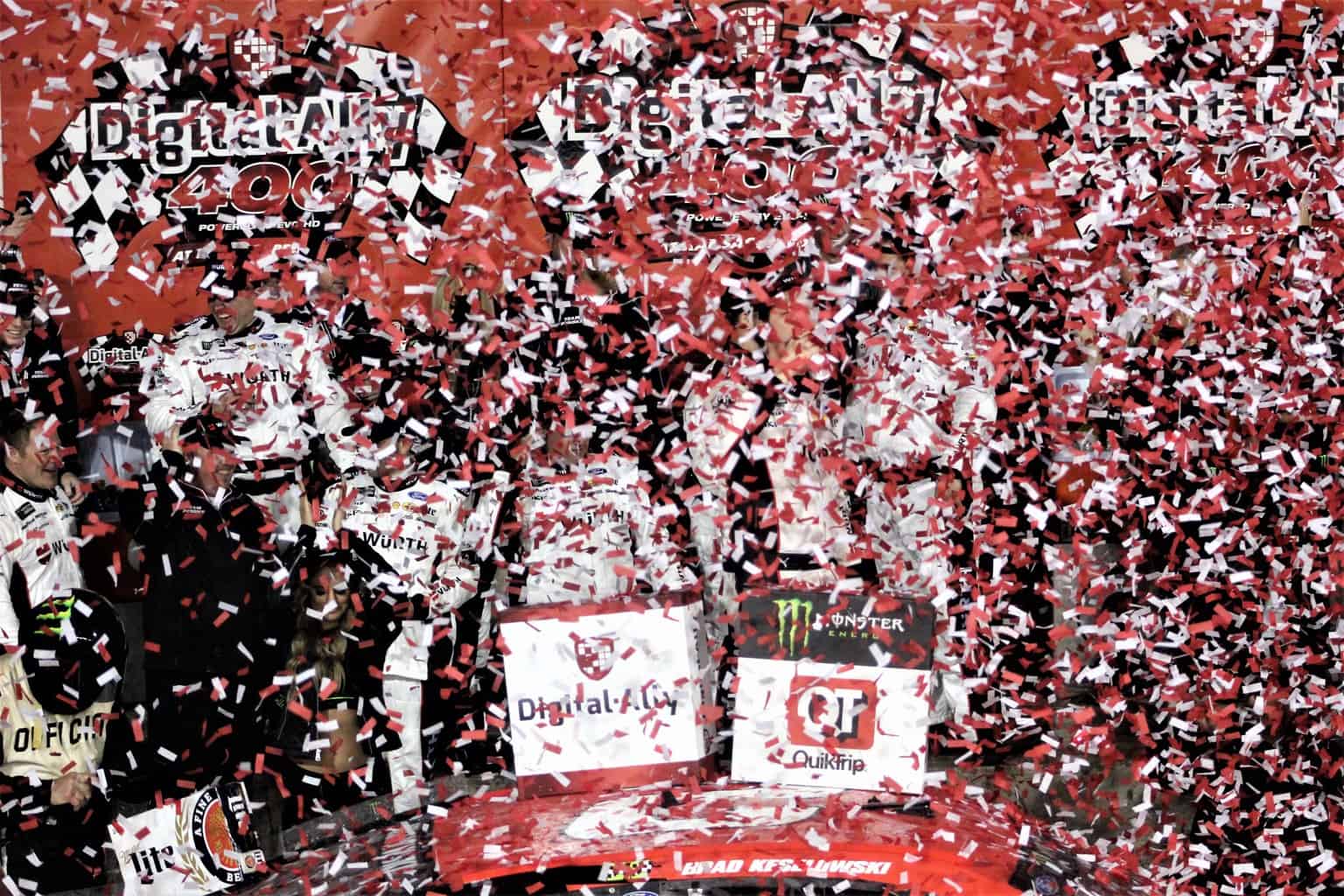 Brad Keselowski scored his third win of the 2019 Monster Energy NASCAR Cup Series season in Saturday night’s (May 11) Digital Ally 400 at Kansas Speedway. The veteran needed NASCAR Overtime and then some nail-biting side-by-side action behind him to clear the path to victory.

But the triumph on this Mother’s Day weekend was bittersweet. The loss of a longtime NASCAR Gander Outdoors Truck Series owner, dying of cancer just yesterday at the age of 67, was front and center on Keselowski’s mind.

“I’ve got to dedicate this win to Mike Mittler,” Keselowski said after emerging from his car. “He helped a lot of guys in their career, and I was one of them. He passed away yesterday and just such a huge loss for the NASCAR community.”

KEITH: A LOOK BACK ON MIKE MITTLER’S IMPACT ON NASCAR

The Team Penske veteran took advantage of a strong restart on the green-white-checkered finish to edge Alex Bowman by just over two-tenths of a second.

“That restart, we just got a great launch, and Alex Bowman, I’ll tell you, he’s going to win a race,” he continued. “He did a great job today. We had a little bit fresher tires and we were able to make the move on the outside there and just caught everything perfect, and I’m so thankful.”

Bowman ended up second for the third straight week; the Hendrick Motorsports driver was up front late before losing the lead to Keselowski. Erik Jones finished third, followed by Chase Elliott, who had to start at the rear of the field after his car failed pre-race inspection twice. Clint Bowyer rounded out the top-five finishers.

Bowyer and Jones had words after the race following a last-lap block by Jones entering turn 1.

The incident kept Bowyer from mounting a last-lap charge he claimed could have lifted the No. 14 Ford up to second place.

“I had a huge run on both those guys but that kid, I guess he was willing to wreck himself to hold the position,” Bowyer said. “If it had been another scenario where I would have had some room I would have just turned him in front of the whole field and he would be back there wishing he wouldn’t have done that. Oh well.”

For his part, Jones said it was “just racing.”

“I’d be mad if I was him. I’ve been blocked a lot, especially with this package and I haven’t done a lot of blocking, so you have to get aggressive and fight for every position,” Jones explained. “That’s all I was doing at the end of the race. We were taking the white flag and you’re going for it. It’s unfortunate. You don’t want people upset, but feelings are going to get hurt and you’ll move on and we’ll be fine next week.”

Stage one, won by Kevin Harvick, was relatively uneventful, with the exception of the competition caution following overnight rains and a flat tire for Denny Hamlin.

The tire that came off of @dennyhamlin's car and an extended second stop to work on sealing the crush panel. #NASCAR pic.twitter.com/QHoH1wNKz8

Harvick was in command for the first half of the race, leading four times for 88 laps before an unscheduled green flag pit stop with nearly 90 laps remaining. The driver of the No. 4 Ford reported a flat tire and brought the car to the attention of his team, but the issue turned out to be nothing more than a windshield tear-off that made its way to Harvick’s front grille.

All 4 tires were up on the 4 car of @KevinHarvick after his green-flag stop at @kansasspeedway. The car had gone tight and there was a windshield tear-off stuck to the nose of the car.

He recovered to a 13th-place finish, thanks in large part to receiving the free pass under the sixth caution.

The Digital Ally 400 was slowed by just seven cautions, none of which were for multi-car incidents. Next weekend, the Cup Series heads to Charlotte Motor Speedway for the All-Star race.