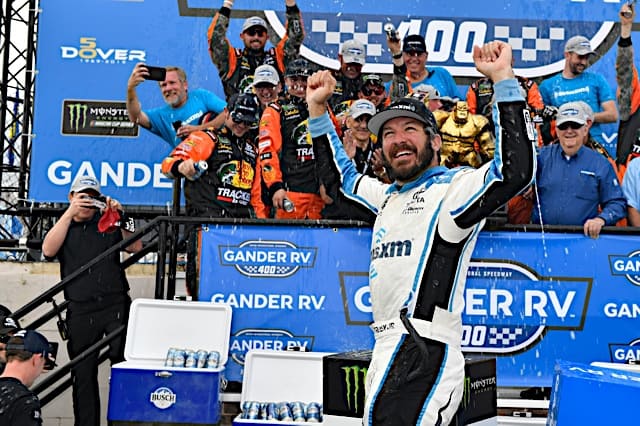 Your daily fantasy NASCAR FanDuel roster should be a little easier to fill out this week than most. Even though NASCAR is one of the most unpredictable sports, Kansas Speedway is one of its most predictable tracks.

The mile-and-a-half track is a haven for the top teams in the Monster Energy NASCAR Cup Series. Prior to Chase Elliott’s victory in fall 2018, last year’s Championship 4 — Joey Logano, Martin Truex Jr., Kevin Harvick and Kyle Busch — had won eight of the last 10 races at Kansas. Rarely do underdog teams perform well at the track, so stick with those with great stats heading into the 2019 Digital Ally 400.

That being said, you won’t be able to afford all of last year’s Championship 4 in your lineup. There’s a handful of midpack drivers in their place who seem to have a knack for Kansas; they could be great to have even if they haven’t won there yet. Just stay away from the bottom of the barrel selections. There won’t be much chance of a miracle this week!

Also, with only 0.1 points awarded for each lap led by a driver, the need for a dominator is less important when building a winning lineup. The 267-lap race will only have a total of 26.7 points up for grabs in this category. Take note when building your roster and focus on midpack competitors who can climb up toward the front on race day.

Here are a few drivers to keep an eye on for Saturday night’s race (May 11).

Truex is the hottest driver is NASCAR right now. He’s won two of the last three races, including this past week at Dover International Speedway. Factor that with his track record at Kansas in recent years and he is a must-pick for this Sunday.

The 2017 Cup champion’s two wins at the track both came in 2017, when he swept the races there. Including those two events, Truex has four straight top fives at Kansas. Five times in his career, Truex has led more than 90 laps in a Kansas race. He has the second most laps led at the track among active drivers, only trailing Harvick (751).

But the most impressive stat for Truex might be that in 21 Kansas starts, he only has one DNF (2008). That means you’re unlikely to lose points by picking him; jump on board his hot streak.

If Truex is the hottest driver in NASCAR, then Elliott is a close second place. He won at Talladega Superspeedway two weeks ago and followed it up with a fifth at Dover, leading 145 laps.

Elliott is the most recent Kansas winner, moving up from the 13th starting position to lead the final 44 laps last fall. Now that he’s figured out the track, Elliott could be a force there for years to come. He doesn’t have any DNFs at Kansas and has improved on his starting position in three straight races, including a fifth-place qualifying run setting him up well for Saturday night.

Blaney has yet to win at Kansas or in 2019, but he’s shown plenty of speed at the track and this year overall. He made his Cup debut at the track back in 2014 and has the fourth best average finish there among active drivers entered in the race.

He’s also led laps in four consecutive Kansas events. Blaney won the pole at this track in 2017 and has won a stage in each of the last two spring races there.

So far this year, Blaney is the only Team Penske driver that hasn’t won. He’s led the most laps (357) of any driver who hasn’t won this year. It all means Saturday night could be the race Blaney finally scores his first win of 2019 and first at Kansas.

Bowman enters Kansas with a tremendous amount of momentum, having finished second in back-to-back weeks. If you were to bet on the next first-time winner, Bowman should probably be your guy.

At 25.0, Bowman doesn’t have a great average finish at Kansas. But take into account his first two years in the Cup Series with BK Racing and Tommy Baldwin Racing. Those runs with underdog teams, not able to provide proper speed drag down that stat.

Since joining Hendrick Motorsports in 2016, Bowman has top 10s in two of his last three Kansas starts and has never finished worse than 18th. That’s a much more accurate read.

Look for Bowman to improve upon those marks given his recent bout of success.

Hemric hasn’t done terribly well at mile-and-and-half tracks so far this season. But given how low he is valued, the rookie could be a great shot in the dark. While the freshman has never driven in a Cup race at Kansas, Hemric did well in the NASCAR Xfinity Series race there last fall. In that event, Hemric finished second after leading 128 laps and winning a stage.

NXS stats don’t automatically translate to Cup success, but there’s way more upside to Hemric than others in his price range. If you blow all of your money on the top drivers, he wouldn’t be a bad one to take from the lower tier.