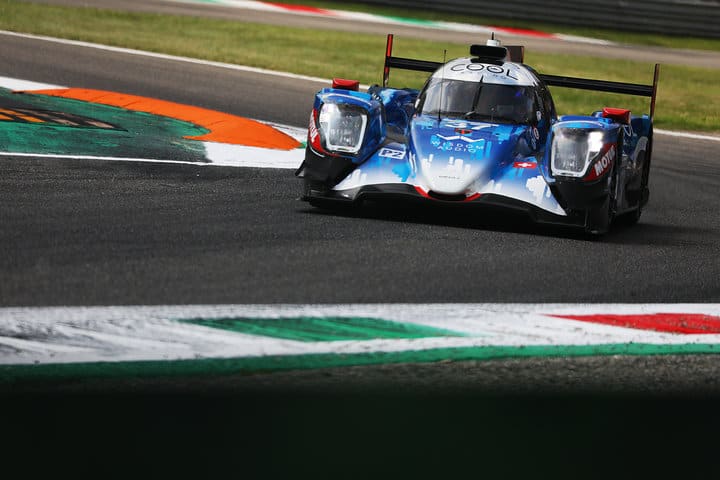 Former Toyota factory racer Nicolas Lapierre claimed the maiden overall pole for COOL Racing in the European Le Mans Series Saturday morning (May 11) at the Autodromo Nazionale Monza for Sunday’s 4 Hours of Monza.  Despite Lapierre’s experience, the pole was a bit of a mild upset since G-Drive Racing was fastest for much of the weekend prior to the session.

Lapierre’s pole lap was at an average speed of 136.468 mph, which was nearly nine-tenths of a second faster than the pole last year.  Lapierre’s lap was a quarter of a second faster than the Aurus 01 of G-Drive Racing’s Norman Nato.  (Note: The Aurus 01 is not a new chassis, but simply another name for the ORECA 07. Aurus is a Russian car manufacturer that sponsors G-Drive Racing.)  Nato was on a lap faster than Lapierre, but it got wiped out when Duqueine Engineering’s Nico Jamin crashed exiting the Variante Ascari.  The red flag was thrown with 15 seconds remaining on the clock, prematurely ending the session while Nato was in the Parabolica.  Jamin walked away from the crash into the Tec-Pro barrier, but he was rather disappointed.

ORECA 07 chassis took up the first eight places in qualifying.  United Autosports’ Filipe Albuquerque had the fastest non-ORECA in ninth.  He likely would have been higher, but he went straight through the runoff at the Variante Della Roggia on his first lap at speed.  As a result, he only got one flying lap.  The second was curtailed by Jamin’s crash.  The best Dallara was Ben Barnicoat in the Carlin No. 45 in 11th.

LMP3 was marred by a series of lap time deletions.  Race director Eduardo Freitas and the rest of the stewards had no patience for violation of track limits.  Even the fastest drivers in the session didn’t go unscathed.

After 10 minutes of qualifying, M. Racing’s Lucas Legeret won the pole with a lap at 124.595 mph.  That came after two of Legeret’s previous lap times were deleted for violating track limits, the second of which was also good enough for pole.

The entire top five in LMP3 was comprised of teams running the Norma M30, which is a bit more streamlined than the Ligier JS P3.  The fastest Ligier was United Autosports’ No. 2, driven by Wayne Boyd.  The No. 2 will start sixth in class.

GTE saw Dempsey-Proton Racing’s Matteo Cairoli win the class pole with a lap at 121.861 mph in his Porsche.  That lap was four-tenths of a second faster than Team Project 1’s Jörg Bergmeister, moonlighting from his regular WEC and IMSA WeatherTech SportsCar Championship rides.  Matt Griffin was third in his Ferrari for Spirit of Race, while Andrea Piccini was fourth in the Kessel Racing Ferrari.  EBIMOTORS’ Fabio Babini was fifth in his Porsche.

The 4 Hours of Monza is scheduled to go green at 6 a.m. Sunday morning.  There are three different places that you can watch.  One is YouTube, where there are no blocks.  Another is the series’ official website, EuropeanLeMansSeries.com.  Finally, it is also available to subscribers to Motor Trend OnDemand.