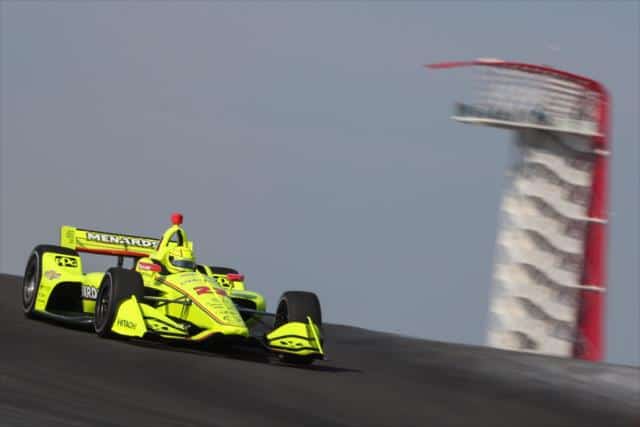 Team Penske’s Simon Pagenaud has mastered the art of racing in the rain.

The dramatics began before the race even began, as CGR rookie Felix Rosenqvist started the No. 10 Honda on the pole, while Andretti Autosport’s Alexander Rossi qualified 17th.

Coming to the green flag, Rossi was hit from behind by Patricio O’Ward, and spent the remainder of the 85-lap event four laps down, 22nd in the 24-car field. As that drama was happening behind him, British racer Jack Harvey drove the Meyer Shank Racing machine into second place.

The first caution of the day came on lap 11 when the Arrow Schmidt Peterson No. 7 of Marcus Ericsson got loose in the sprinkling rain; he finished in last.

Helio Castroneves and rookie Colton Herta were turned around on the lap 14 restart, ending Herta’s race and immediately putting the yellow flag back out.

Light rain had started to fall by lap 20, as Rosenqvist endured a flaming right rear tire, Will Power plummeted backwards through the running order, at one point running 18th, and Dixon and Josef Newgarden traded the lead, hoping to time the switch to rain tires correctly. Numerous cars moved up and down the leaderboard throughout the event.

Rain started to fall heavily by lap 55, and Castroneves’ spin on lap 59 brought out the final caution of the day. Newgarden was penalized for an uncontrolled tire, ending his chances of victory.

Dixon led the restart around lap 68, while Pagenaud began in the latter half of the top ten, steadily chewing his way past Spencer Pigot, Matheus Leist and Harvey.

The winning pass came with contact on lap 84, and Pagenaud claimed victory for the third time in this event.

Harvey, Leist and Pigot rounded out the top five, while Power rallied to finish seventh.

The next event for the NTT IndyCar Series will be the Indianapolis 500 on Sunday, May 26 at noon ET.

Helluva drive! Simon put on a clinic in the rain!

He was lucky to be first out with rain tyres.

True, Simon was lucky to be first out of that group of 7 or so that pitted late to change – his team mate losing control of a tire could have cost him.

Still, he restarted 6th (was 5th by turn 1) and eliminated what grew at one point to a 12 second (IIRC) lead Dixon had within 18 laps to win. Absolutely exhilarating to watch – I was surprised he was able to get to and around Harvey, didn’t think he’d ever be able to get to Dixon.