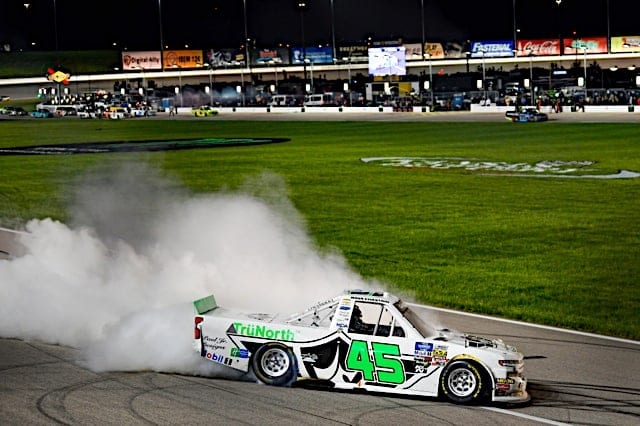 In a Nutshell: Ross Chastain brought Niece Motorsports its first victory in Friday night’s Digital Ally 250 at Kansas Speedway. After saving himself from a near-spin with less than 20 laps remaining, Chastain took advantage of Stewart Friesen‘s dry fuel tank to rocket to his first career Gander Outdoors Truck Series win and an emotional trip to victory lane.

An emotional Ross Chastain in Victory Lane is one of our favorite things around here. pic.twitter.com/dan4w3wSUA

Ben Rhodes ended up second, followed by Todd Gilliland, who scored his best finish of the season in third.

KEITH: GILLILAND SCORES TOP 5 IN KANSAS WITH CAREER ON THE LINE

Meanwhile, polesitter Matt Crafton struggled to sixth after a fueling issue dropped him through the field. Grant Enfinger and Brett Moffitt, who tangled with just a handful of laps remaining, ending the chances either one would win ended up seventh and eight, respectively. Riley Herbst and Harrison Burton rounded out the top 10.

Who Should Have Won: It looked like the race was Friesen‘s to lose, and lose it is exactly what he did. The driver of the No. 52 Chevrolet took off after taking two tires when it was scheduled for a four-tire stop. The resulting lack of fuel that made it into the tank ended up putting Friesen short to make it to the checkered flag, and once again, he walked away without a win that he’d come so close to.

“A bunch of miscommunications between me and Trip (Bruce, crew chief) and it goes back a couple weeks,” a visibly frustrated Friesen said after emerging from his truck. “We’ll work on it and get better.”

Ben Rhodes took the checkered flag second on a night where thought he’d “be lucky to get a top 10.”

But it wasn’t all easy as the driver of the No. 99 Ford struggled with handling from final practice all the way through the race.

“I was about to wreck no less than 40 times tonight,” he explained after the race. “I was a rolling catastrophe.”

Neither Rhodes or eventual race winner Chastain would have even made it to the finish if not for the evasive move the driver of the No. 99 Ford made inside 20 to go.

Think this is called, "laying it all on the line." ?

With his runner-up finish, Rhodes gained a position in the championship standings and now sits fourth, 33 markers behind point leader and teammate Enfinger.

Throughout Friday night’s race, you didn’t hear much about Kyle Busch Motorsports as none of the organization’s drivers really ran well enough to be a factor for the win. But when the checkered flag flew, all four of the trucks were in the top 10.

Gilliland was the highlight, finishing a season-high third after struggling for much of the year in a season where his job is likely on the line.

“We worked really hard all through practice, got the truck a lot better. Me and my crew chief, Marcus Richmond, really were on the same page all weekend,” he explained. “That’s what it’s all about is putting together just solid weekends like this. We qualified fifth and finished third, that doesn’t sound overly spectacular, but when we have been qualifying in the teens and finishing there too, this is a big difference.

“We’ve really struggled over the last few weeks, but that is what a team is all about. Staying together through everything. It’s definitely the best run we have had in a long time. We just have to try and take this momentum into next week. I think my crew chief and whole team is very excited with the truck we are bringing to Charlotte.”

Meanwhile, the other trio of KBM drivers seemed to struggle with handling throughout the race, something that’s quite uncharacteristic of the organization’s typical performance.

Jones spun early in the race to bring out the first caution but managed to recover to a fifth-place finish in his second start of the year.

“I fought loose all night in the truck,” Jones said after the race. “We were really tight in practice and I was pretty surprised about that. I just could never get it out of it. I guess we found our limit the first run there.

“All in all, that’s why you don’t give up in these races. You can always come back to get inside the top-five for the finish and have a shot to get to victory circle. Everybody at KBM kept their heads in the game and looking forward to getting to the next one with these guys.”

Herbst made his first start of the year for KBM and ended up with a top-10 finish, though he didn’t do it without his own struggles.

“It was definitely a struggle. We had some speed by ourselves, but then once we got in traffic we just stalled out and couldn’t get any front turn in the truck,” Herbst said. “That was probably the biggest issue. Just overall fighting grip all night long. We just couldn’t find any grip all day since first practice. I don’t really know what it was, but we’ll figure it out.

“This was a big learning experience for me at an intermediate track and completing all the laps was cool. Just looking forward to the next one.”

On the other end of the spectrum, Burton struggled with handling throughout the race and barely managed to keep his spot in the top 10 by the time the checkered flag flew.

“It was not fun. We’re just used to running better than that and we were honestly just terrible tonight. I don’t know why. Just no overall grip.

“In first practice, I felt really, really good about it and then in second practice it all went away and that was really, really weird. Just could never get it back from that. We tuned on it a ton and it went either way, from tight to loose, but it was just a lack of overall grip.

Everyone is their own biggest critic and Burton was much of the same about his run.

“I could have had better restarts to take advantage of opportunities and get track position,” he said. “We just struggled tonight all around as a team. We’ll be back at Charlotte and hopefully get a win.”

Kyle Busch returns to the field for his final start of the season next Friday night at Charlotte Motor Speedway, and it’s a fair assumption to expect he’ll be a major factor throughout the race.

Points Update: Enfinger remains the point leader by 13 markers over Moffitt, who gained two spots in the standings. Friesen is third, two points behind Moffitt. Meanwhile, Rhodes, on the strength of a runner-up finish moved up to fourth. Johnny Sauter, who suffered drive line problems early in the race and spent an extended period of time in the garage for repairs, dropped three positions to round out the top five.

Up Next: The Gander Outdoors Truck Series heads to Charlotte Motor Speedway next Friday night. Coverage for the North Carolina Education Lottery 200 begins at 8:30 p.m. ET on Fox Sports 1; the race can also be heard on your local MRN affiliate or SiriusXM NASCAR Channel 90.