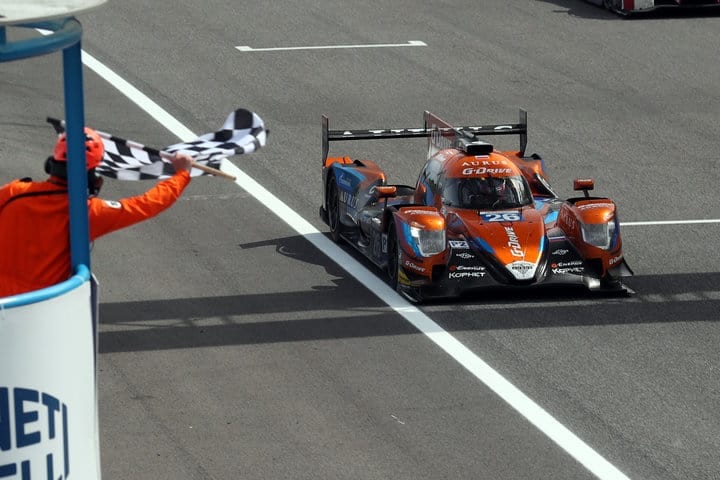 G-Drive Racing’s Norman Nato, Job van Uitert and Roman Rusinov claimed overall victory Sunday (May 12) in the 4 Hours of Monza, the second race of the European Le Mans Series season.  It is the team’s first victory since they rebranded their ORECA 07 chassis as the Aurus 01 (it’s a branding exercise as Aurus is a Russian manufacturer that currently builds Vladimir Putin’s presidential limousine).

“It was a very good race, but not an easy one since we had a different strategy,” Rusinov said after the race.  “I think the whole team did an amazing job.  Job did an amazing and Norman as well.  Glad to be [on the top step of podium] and glad that Aurus could win their first race here in Monza.”

COOL Racing’s Alexandre Coigny started from the pole in his ORECA 07, but he simply did not have the pace to keep himself up front.  GRAFF Racing’s Alexandre Cougnard was able to dive inside Coigny at the Rettifilio on the first lap to take the lead away.  Coigny and his teammates ultimately were never in contention after a stop in the first 10 minutes dropped the team way back.  They would eventually finish ninth.

Cougnard pulled out a decent lead, then lost the advantage when DragonSpeed’s James Allen ran him down.  Allen briefly took the lead 30 minutes in, but Cougnard was able to able to take it back (but not without some casual contact that frustrated Allen.  Cougnard held the lead until he got out of the car 75 minutes in and handed over to Jonathan Hirschi.

Rusinov rose the notion of there being an alternate pit strategy in his comments, but it really wasn’t all that alternate.  Four of the top five finishers were on the same strategy.  If anything, GRAFF Racing was on the alternate strategy by sticking to regular windows and not deviating from it.

Most of the leaders made their second stop of the race on Lap 34 during a full course yellow for IDEC Sport’s Patrice Lafargue spinning into the gravel in Lesmo No. 2.  Cougnard chose not to stop.  Van Uitert took the overall lead when Cougnard handed over to Hirschi.   When the race’s only safety car period came out on Lap 51 for a crash involving Nielsen Racing’s Nobuya Yamanaka, everyone pitted except Hirschi, who stayed out to Lap 66.

This was a scenario that was set up to burn GRAFF Racing and sure enough, it did.  Cougnard (back in the car at this point) made the team’s fourth stop of the race on Lap 87 with 85 minutes to go.  Seven laps later, United Autosports’ Mike Guasch put his LMP3 Ligier in the gravel to bring out another full course caution.  This put GRAFF Racing miles behind and relegated them right out of contention to win.

The margin of victory was 2.135 seconds over the No. 28 IDEC Sport ORECA 07 of Paul-Loup Chatin, Paul Lafargue and Memo Rojas.  United Autosports’ Ligiers were third and fourth with the No. 32 of IMSA regular William Owen, Ryan Cullen and Alex Brundle taking the final step of the podium.  The No. 22 of Filipe Albuquerque and Phil Hanson may have been fourth, but they were 46 seconds behind their own teammates.  The GRAFF Racing ORECA 07 of Cougnard, Hirschi and Tristan Gommendy were fifth.  Only these five teams finished on the lead lap.

LMP3 was won by Eurointernational’s No. 11 Ligier JS P3 shared by Mikkel Jensen and Jens Petersen.  This is the same team that used to compete in CART back in the 1990s before briefly moving to the then-Indy Racing League.  Even though they haven’t competed much in North America in recent years, they still race under the American flag.

The victory was quite unexpected as the team had to come from the very back of the grid after a practice crash wiped out the chassis the team intended on racing.  Having not set a time in qualifying on Saturday, the team was forced to start an unfamiliar car (the first Ligier JS P3 ever produced that had been rented as a temporary replacement).

Eurointernational’s margin of victory was 23.307 seconds over Inter Europol Competition’s Martin Hippe and Nigel Moore.  United Autosports’ No. 2 Ligier for Wayne Boyd, Garret Grist and Tommy Erdos was third.  Fourth was Realteam Racing’s David Droux and Esteban Garcia in the first of the Norma M30s.  The pole sitting M. Racing Norma of Lucas Legeret and Laurent Millara was fifth.  The Ultimate team that won at Paul Ricard failed to finish after Francois Heriau collided with a GTE Ferrari with less than 30 minutes remaining.  The impact broke the right rear suspension, ending their day while they were running second.

In GTE, Dempsey-Proton Racing’s No. 77 Porsche for Matteo Cairoli, Christian Ried and Riccardo Pena claimed the class victory, despite an early spin for Ried.  It is the first ELMS win of the season for the team.  For Ried, it is his seventh major GTE victory (combined between ELMS and the WEC) since May of last year.

The European Le Mans Series is officially off for the next two months before returning to action at the Circuit de Catalunya-Barcelona in July for the third race of the season.  Between now and then, the 24 Hours of Le Mans will be held.   A full one-quarter of the 60 starters in next month’s 24-hour race (10 in the LMP2 class and five more in GTE-Am) are full-time ELMS teams.