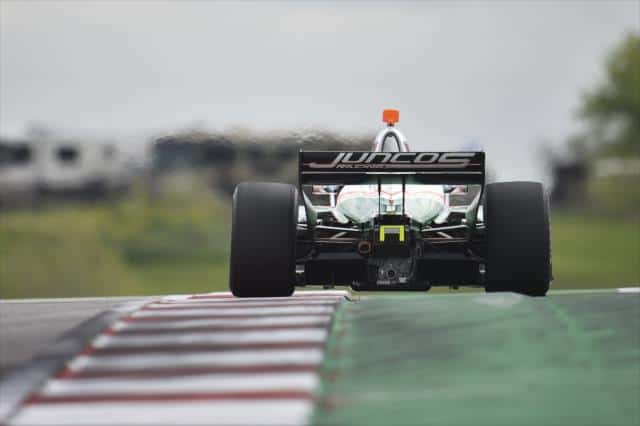 As first reported by RACER, Juncos Racing has lost its sponsorship for the 103rd Indianapolis 500. The road to the Indianapolis 500 is already a tough one, but without sponsorship, it’s almost impossible. The organization, should it continue its drive toward the 500, will have to compete for one of 33 spots, but the organization showed up with a plain white car in advance of Tuesday’s (May 14) first practice.

“Unfortunately, we lost the two main sponsors that we thought was going to happen,” Juncos told Marshall Pruett of RACER.com. “The second one was just last week. But we are here and you know the car is ready, Kyle’s ready, the team is ready.

“It’s just going to be a little white car, but we’re not going to lose the motivation, we’re going to keep pushing,” he said. “And you never know, right? There’s been stories that I found that maybe the last two weeks, even the last week, you might find something before the race. So, we’re going to focus, obviously, now it’s time for the whole team to focus on practice, qualifying to make sure we perform as good as we did last year. And build the momentum from there, you know?”

Kyle Kaiser is slated to pilot the No. 32 for the organization starting Tuesday to attempt to make his second straight Indianapolis 500. Kaiser finished 29th in last year’s Indianapolis 500 after mechanical issues plagued him during the race. He has one start this season in IndyCar, at Circuit of the Americas where he finished 18th.