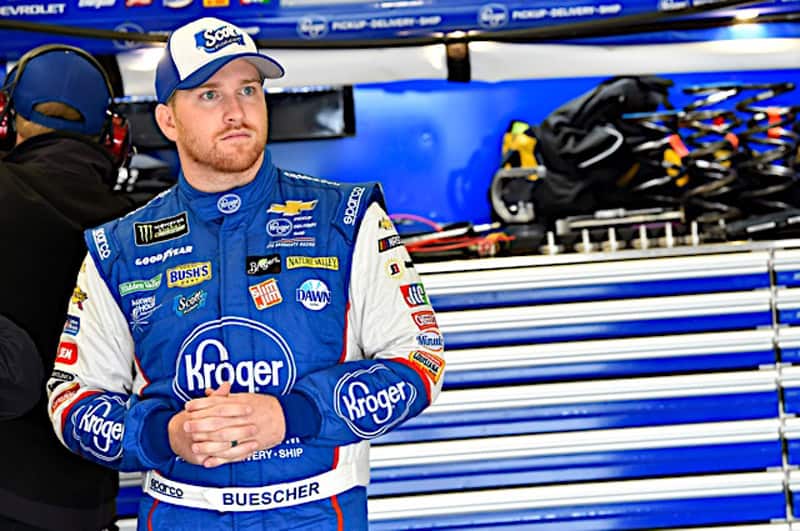 Chris Buescher was on a level by himself in terms of underdogs during Saturday night’s (May 11) Digital Ally 400 at Kansas Speedway. The No. 37 JTG Daugherty Racing Chevy was as competitive as it’s been all year and more importantly, Buescher ended up with a finish that matched his strong run.

Buescher ran in the top 10 for much of the race, even leading 10 laps at one point during the middle of green flag pit stops. Buescher wound up 10th at the checkered flag, his second top 10 of the year. Coupled with his ninth-place finish at Atlanta, this team may be the most improved on the 1.5-mile tracks that comprise the majority of the schedule.

“It was really fun all day. This group did a fantastic job this week,” Buescher said after the race. “We knew we had a good car. I’m not complaining about the system, I loved it. We did not qualify as good as we wanted to, but it was something that we sacrificed to be able to go out there and run up there. We did not need that caution at the end, that definitely made it hard to get going for the first two laps. After that, we were really solid.”

Behind Buescher, there was an extensive contingent of well-funded teams. The next highest finishing underdogs were Matt Tifft in 21st and Corey LaJoie in 22nd.

Rookie Tifft moved up five spots from his 26th-place starting spot, earning his second-best finish of the 2019 season. LaJoie was quick all weekend, qualifying his No. 32 GoFas Racing Ford in the 16th position. The 22nd-place result was his best finish outside of the two superspeedway races thus far in 2019.

On Friday (May 10), the Gander Outdoors Truck Series ran under the Kansas lights in the Digital Ally 250. Perennial crowd favorite Ross Chastain became the beneficiary of Stewart Friesen stretching his fuel just a bit too far. The No. 52 truck piloted by Friesen began sputtering and slowed with just three laps remaining. Chastain flashed by to his outside and held on to claim the win.

The victory was the first for Chastain in 66 truck starts, as well as the first win for Niece Motorsports, which had fielded 93 entries without a win until Friday night. While we recognize Chastain as an underdog, he doesn’t seem to relish the role. At this rate, he may not qualify as an underdog for much longer.

.@RossChastain: “I’ve been called an underdog my entire career and I’m tired of that. I’m so sick of it. I know they mean well, but I just want to win!”

Other Truck competitors with solid showings were the Young’s Motorsports teammates of Tyler Dippel and Gus Dean, who finished 12th and 14th, respectively.  Sandwiched between them was Jordan Anderson, who came home 13th.

The name Matt DiBenedetto might not be a new one for many NASCAR fans. Neither are his aliases “Guido” or “DiBurrito.” But there is an extensive journey that brought to where he is today.

At 17, he landed a shot as a Joe Gibbs Racing development driver, beginning with a partial schedule in the K&N Pro Series East. He made seven starts in that division, earning three poles and two victories.

Additionally, DiBenedetto made seven starts for JGR in the NASCAR Xfinity Series. The results didn’t match how well the team ran and that opportunity disappeared.

After limited participation in a national touring series for a few years, DiBenedetto resurfaced with a full-time ride at BK Racing in the Cup Series. He continually outperformed his equipment, stunning the entire garage area with a sixth-place finish at Bristol Motor Speedway in 2016. DiBenedetto spent 2017 and 2018 at Go Fas Racing, during which time that team also made dramatic improvements.

For 2019, DiBenedetto has taken over the No. 95 for Leavine Family Racing. Bringing things full circle is the fact that LFR just launched a technical alliance with Joe Gibbs Racing, where he began his career 10 years ago. With the new partnership, DiBenedetto has all the tools to continue to better both himself and the team.

“This is what sports is all about.”- Ross Chastain after his first career NASCAR Trucks win.

Always the team player, @TimmyHillRacer is not just a #NASCAR driver…he's taken on the role of 'decal guy' and he does a great job at it too! #WeWearManyHatsOnThisTeam #GroupEffort #DigitalAlly400 pic.twitter.com/E17OBUKHDm