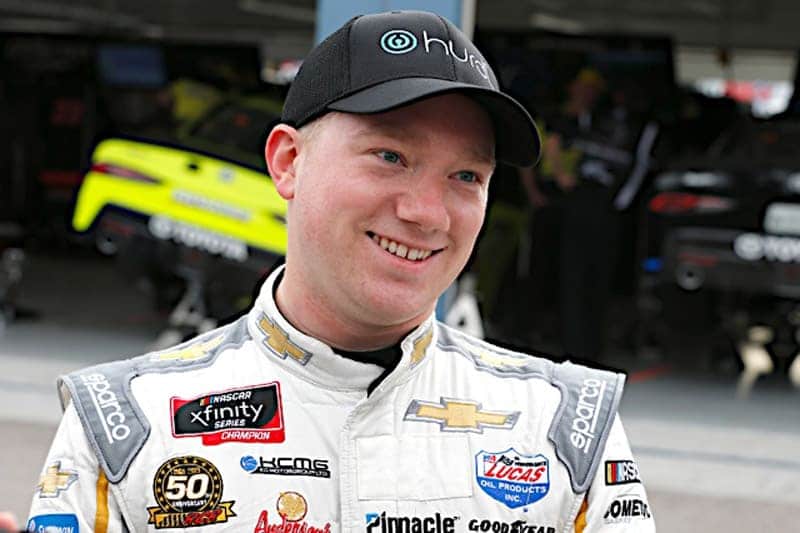 The 2019 Digital Ally 400 at Kansas Speedway offered the perfect storm of circumstances for NASCAR’s new handling package. As I wrote yesterday (May 12), cooler temperatures and graduated banking equaled the perfect 1-2 punch for good racing. More than ever, drivers appear to be schooled in the draft, pulling runs together you’d typically never see outside Daytona or Talladega Superspeedway. As good athletes often do, they’re compensating for some of the skills taken away by, well, never touching the brake pedal.

“I think I ran the last 20 or 30 laps wide open,” winner Brad Keselowski said. “In a lot of ways, that’s frustrating, because it felt like before at least when you were lifting, like there was something you could maybe do different. But when you’re running wide open behind somebody and you can’t make the pass, you’re like [grrr], so it’s frustrating.

“But on the other side, it actually is just a touch easier to pass in some ways, too, because the draft helps pull you back to somebody and all those things.It’s just different.I don’t know if there’s a right or a wrong. I felt like going into this race that this would be a good — especially with it being a night race and being cool temps, this would be a strong showing for these rules and for the ability to pass and do those things. Obviously, I’m a little biased because I won the race, but I felt like it was.”

The question is, can NASCAR sustain the momentum? We’re off to Charlotte Motor Speedway now, spending two weeks at the 1.5-mile racetrack that spawned this new package a year ago. And that’s important: this weekend’s All-Star Race is the first time we’ll get somewhat of a direct comparison to see how much teams have improved. Plus they get two weeks to work on it!

Two straight night races combined with past experience means the teams have a good shot to mimic what became the most memorable Kansas final minute in over a decade. (Anyone remember 2008, when Carl Edwards slammed the wall trying to pass Jimmie Johnson on the final lap?)

“I feel like you saw the cars run closer than they probably ever have here and saw some pretty good battles throughout the day,” Keselowski added to put a bow on Kansas. “And that’s definitely because of the rules package.  It has its strengths and weaknesses, and if there’s going to be a strength, it’s going to be races like this, and I feel like it delivered.”

So Charlotte, with night racing and expected cool weather, should be solid. Believe it or not, there might be a Coca-Cola 600 where a driver leads less than 375 laps (which has happened two of the last three years).

But I think NASCAR’s biggest problem going forward could be outside their control: Mother Nature. As we get into the heat of the summer, “cool” nighttime temperatures become virtually impossible at daytime races like Michigan and Chicagoland. Even a Kentucky Speedway race could be muggy in the middle of July.

Kansas also caught a few breaks. The night’s dominant driver, Kevin Harvick, made an unscheduled stop to take himself out of contention in the final stage. It left the race wide open, a chance for hungry drivers like Ricky Stenhouse Jr., Alex Bowman, Erik Jones and hometown hero Clint Bowyer to jockey up front.

That’s unlikely to happen every time. We’ve seen in other scenarios thus far the aero push still comes into play, allowing a dominant driver (see: Kyle Busch at Auto Club Speedway) the chance to scoot away as the frontrunner.

Can engineers rejigger these cars to still perform in the heat of the summer? There’s a chance to grab some palpable momentum here if so.

On an off night for some of the sport’s best wheelmen, Bowman, Jones, Stenhouse, Chris Buescher and others took turns near the front. All of them entered and left the night squarely on the playoff bubble.

Who has the best chance for long-term momentum?

Bowman may have three runner-up finishes, but I’m going with Jones. He now has a sixth and a third these past two weeks for Joe Gibbs Racing, jumping up four spots in the standings. Sure, he was the center of controversy after getting front and center in Clint Bowyer’s way entering the final lap. It was a dangerous move, one where the young driver would have probably been spun out if Bowyer were one of the sport’s more aggressive drivers (Kyle Busch or Joey Logano come to mind).

But Jones is garnering momentum at a time all three of his JGR teammates have already won — at least twice. Truex has won two of the last four races, Kyle Busch could win a beauty pageant right now the way he’s been running, and Denny Hamlin has the 2019 Daytona 500 trophy.

It bodes well for Jones entering the next three points-paying events. Teammate Busch dominated last year’s Coca-Cola 600, leaving notes, and it’s a sister track to the Kansas race Jones ran so well in. Then it’s on to Pocono Raceway, a track where Jones has two top-five finishes in four starts. Michigan International Speedway comes next, another race with this low-horsepower package where Jones has never run worse than 15th.

Speaking of Jones, his recent success puts the squeeze on JGR with Christopher Bell. What do you do with the kid? Where can he go at JGR without kicking out a powerhouse driver? And would a new team added to, say, Leavine Family Racing have enough speed to showcase his skills?

That’s where Tyler Reddick comes in. The whole world has been so blinded by Bell’s NASCAR Xfinity Series drives they’re letting a potential 2020 Rookie of the Year candidate slip under their nose. Reddick, running just his second Cup Series race at Kansas, finished ninth for Richard Childress Racing Saturday night. The No. 31 Chevrolet team caught a break when a caution came before their green-flag pit stop; it boosted a top-15 car right inside the top 10.

But the run was still plenty impressive. Even more so was Reddick’s attitude after the race.

“I always want more,” Reddick said. “I’ve raced against some of these guys in the Xfinity Series. It’s still a lot of fun to finish in the top 10, but we didn’t come here to run top 10. We came here for the win.”

It’s a pretty aggressive attitude for a guy who’s not a full-time Cup driver yet. But that opportunity seems close at hand. RCR has the room to expand back to three cars, an unspoken reason the defending NXS champ jumped from JR Motorsports. And even if they don’t come 2020? Reddick has as many top 10s in two starts as full-time RCR Cup rookie Daniel Hemric has in 12. Uh-oh.

Now, RCR equipment is no match for Bell if he makes his way to JGR for 2020. But RCR versus Leavine Family Racing? Reddick could run circles around that. And last I checked, this guy has already won in 2019 and leads Bell in Xfinity Series points. So why are people overlooking the five-foot-one guy?

Harvick, meanwhile had another bad-luck bobble at Kansas. Debris on his grille made him think there was a flat tire while leading the final stage; an unscheduled stop under green to remove it left him a lap behind. An unlucky caution left him trapped there after that, a 13th-place run with a car that led a race-high 104 circuits.

It was the most speed Harvick had shown since Las Vegas Motor Speedway; his pole was part of a 1-2-3-4 qualifying effort for Stewart-Haas Racing. But it’s clear in race trim this Ford team is still playing catchup to Team Penske, their rival who walked away with Saturday night’s big trophy.

And for Harvick, it’s another uncharacteristic mistake. He’s a driver who will never admit the pressure is getting to him, more of a Tony Stewart type who will blame the media for blowing it all out of proportion. But the fact remains Harvick has the worst start of his six-year career at SHR. There’s no finish better than fourth, and the laps led count (268) is on pace for his lowest since his last year with RCR (2013).

Everyone keeps asking Harvick when he’s going to win, adding to the mental frustration. A wild rumor he had to shoot down about replacing Darrell Waltrip in the booth didn’t help matters either. The defending NASCAR All-Star Race winner, both driver and team appear badly in need of a repeat performance.

Finally, there’s Keselowski, escaping at Kansas with a third Cup Series win in 12 starts. That equals his win total from last year with 24 races still to go. His 689 laps led are a series best; yes, even more than Kyle Busch.

Others, like Busch and teammate Logano, have been flashier thus far this year. Truex remains a feel-good story over at Gibbs. But it feels like the 2012 Cup Series champ, now 35 years old, is overlooked as a title contender. It’s true he’s made the Championship 4 just once in the current playoff format (2017). But Penske is the best organization in terms of speed. And teammate Logano is bidding to do the impossible: No one has won back-to-back titles since the latest postseason tweak in 2014.

So Kansas served as a little reminder: don’t forget about Kes.

P.S. – Congratulations to our Danny Peters! The regular writer of 5 Points to Ponder is now the proud father of a baby boy, Theo. He’ll be on paternity leave for the next few weeks. Both mom and baby are doing great!