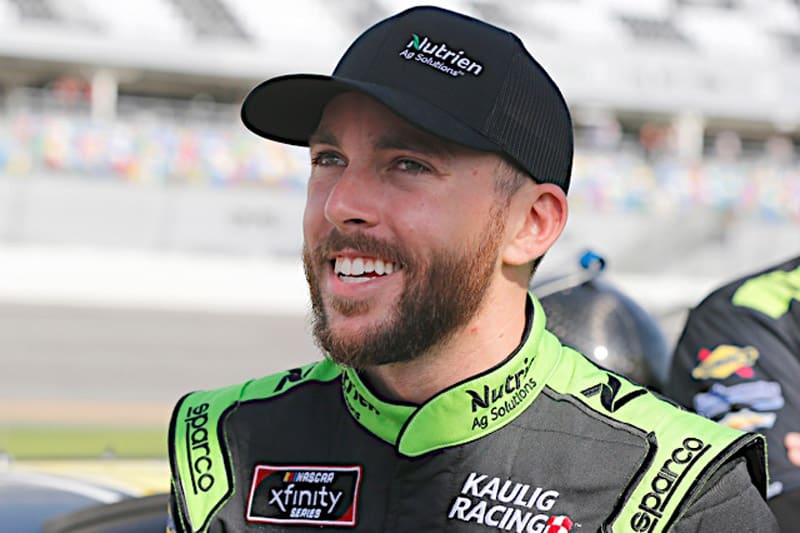 After Ross Chastain’s big Gander Outdoors Truck Series win at Kansas Speedway this past weekend, many eyes were opened as to how much talent the young driver from Florida really has. It was one of the most impressive wins, despite Stewart Friesen running out of fuel after dominating the race. Chastain hung in there all night and stole the win.

Can Chastain be a future star in the sport? When and who can give him his big break again?

Meanwhile, over in the Monster Energy NASCAR Cup Series, Kyle Larson is currently on a two-race streak of top-10 finishes after a rough start to the season. In September, it will have been two years since he has won a race in the series. Many expected a comeback season for the driver of the No. 42 Chip Ganassi Racing car after going winless last season.

Will Larson find victory lane in the next few races? Will he win at all this year and if so, how soon?

Q: Can Ross Chastain really be one of the next stars in NASCAR? Darren S., Atlanta, GA

A: Yes. Ross Chastain is one of the most underrated but talented drivers in the garage area who has not had a chance with a top team on a full-time level yet. Just in his few starts with Chip Ganassi Racing in the Xfinity Series last season, he scored one win at Las Vegas, led the most laps at Darlington and scored a top-five finish at Richmond. The man has tons of talent.

He is the only driver this year to run every single race in the top three series this season. The upside for Chastain is unbelievably high and his future is very bright. The only issue is finding a sponsor that can carry him to a top team in the sport. Currently, he is with three teams that would not be classified as premier but he has performed regardless of what they are labeled.

His win at Kansas this past weekend was more than impressive, especially with it being Niece Motorsports’ first ever win. Yes Friesen ran out of fuel and that was the main reason he won, but he ran top five that entire race and put himself in position to win, as he has a lot this season in the Truck Series. Xfinity has not gone as smoothly for him, but as we get into the season more and more, he will find his groove with JD Motorsports.

And even though Premium Motorsports is definitely at the lower level in the Cup Series, he has outperformed the equipment many times, including his top-10 finish in the Daytona 500 this season. He seems to always keep the car in one piece as well, which is always valuable when a young driver is trying to learn at the top level.

Many people want him in a top Cup ride. I cannot blame them at all. He definitely deserves that shot. If it weren’t for DC Solar’s issues, Chastain could have a few wins in Xfinity this season as he was due to drive the Ganassi car in the series until the sponsorship issues arose and the team shut down.

He is going to get his chance sooner or later. Somebody is going to put him in a top car, which would more than likely be in Xfinity or Cup. Once he gets that top ride, the sky is the limit for Chastain. He could quickly become a star in the sport. He just needs that big break.

Q: Do you see Kyle Larson winning a race in the next few weeks now that he has a couple of good finishes the last two races? Jennifer T., Houston, TX

A: Larson has been hit or miss all season long, and it has been very unpredictable whether he will have a good race or not for that specific week. Despite his struggles, I see him scoring a win soon. That does not mean the next few weeks but soon to where he will lock himself in the playoffs.

The one fear I had with Larson going into this season was this package not fitting his driving style, meaning it would cause him to struggle. That fear has seemed to be a reality from the looks of his early season statistics. He has had his share of good races such as leading the most laps at Atlanta, a third-place finish at Dover and two other top-10 runs at Daytona and most recently Kansas. His bad races have not been due to a slow car, but rather a lot of bad luck.

When he broke out in 2017 and won multiple races and looked like the championship contender everyone expected him to be, that seemed to be the catapult towards stardom and success in the sport. Last year was not easy, as he failed to win a race, and the start of this year has been much of the same. Larson needs to have some luck on his side in order for his season to truly get going. A couple of good runs do help, but I want to see this continue for another few weeks in order to give a fair assessment.

There is no doubt that he is a top five talent in the garage area, no matter what he drives. It is unfortunate that he has had so much bad luck since coming to NASCAR, preventing multiple great finishes and possibly some wins. He is going to make the playoffs easily; there will not be any issues points-wise as we get into the summer.

My only thing with Larson is this package and him having to adjust to it. He has been at his best when the cars are difficult to drive and off throttle versus on throttle time is what makes the difference. With the package this year, on the big tracks at least, that all goes away for the most part. He still has the speed in his cars and that will continue.

Having Larson return to victory lane would be a great confidence boost for him, and once he does, it could shake off the bad luck he has had this season. It will happen soon, as we have some of his better tracks coming up, such as Michigan which is where he scored three wins in a row from August 2016-August 2017. You cannot keep a great talent like him down for long. He is going to be back to form shortly.

Chastain did not steal that win, he was smart enough to stay in his pit and get four tires and a full tank of gas. Friesen on the other hand, left the pits with only two tires and short on gas during what was supposed to be a four tire pit stop. Chastain won by doing what he was supposed to do. Friesen lost in a bonehead move.

Not to take anything away from him, but a lot of the other top contenders running better than him also had their own issues.